Historian and author David McCullough says the book is “a stunning achievement.”

Lafayette students can call Masters of the Air – soon to be a Tom Hanks-produced mini-series on HBO – what few others can. Their own. 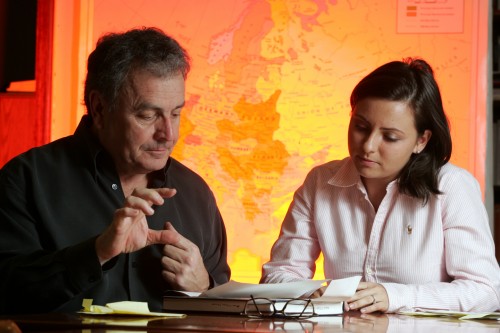 Margarita Karasoulas ’08 worked with Prof. Miller on “Masters of the Air.”

Miller’s projects owe their success to the his powerful storytelling and research ability, of course, but a hat tip is owed to the students whose lives Miller helped change through their involvement with the project. Just check the acknowledgements page.

“I take them through every facet,” says Miller. “I’m trying to get them to see how a book is made.”

Wagner, who is principal court attorney to a justice in the New York County Supreme Court, says she was taken aback when Miller first offered her the chance to work on the project. She was a freshman, but if she had any trepidation about working with an author of Miller’s magnitude, it dissolved quickly.

“He was very kind and patient,” Wagner says. Soon she found herself digging through materials at a specialty library in New York and at the New York Public Library. She edited every chapter of Masters.

“It improved my confidence,” she says.

Miller says many of the students are reluctant to offer criticism at first, but eventually they open up.

“You’re the kind of person I’m writing the books for,” he tells them. Soon the students find themselves suggesting outlines for chapters and helping him make choices about language.

In addition to proofreading, Holtsclaw researched photographs at the National Archives. She also found missions reports and did research at the Library of Congress, looking through the personal papers of Air Corps leaders like Carl Spaatz, and a letter from Eleanor Roosevelt.

“There were definitely long hours going through boxes of documents. Having an iPod helped,” she says. “And wearing white cotton gloves in order to touch many of these things was an experience — but it felt like I was holding history.” 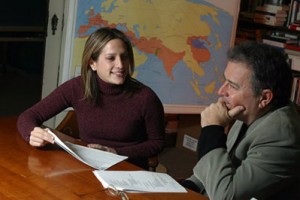 Holtsclaw is a judge advocate in the Air Force. She obtained a degree from Georgetown Law and is stationed at Travis Air Force Base, advising commanders on disciplinary issues and prosecuting courts-martial.

“I learned a lot from him about research and writing, as well as the book publishing process. There were several drafts of each chapter, so I got to see how he developed and made changes that improved the storytelling,” she says. “Don delegated and gave his EXCEL Scholars responsibility and trusted us to make contributions to his work.”

Karasoulas came to Masters when it was nearly completed, but she had a chance to edit and proofread the work on its way to the publisher.

A sophomore double major in history and art at the time, Karasoulas went on to work for Miller for three years. During her junior and senior years she conducted primary source research for Miller’s most recent book, Supreme City. She helped research the book on the Civil War battle of Vicksburg, Miss., Miller is working on today.

“Don is a gifted writer and storyteller; his infectious enthusiasm for the material prompted me to consider a career in academia,” she says. Today, Karasoulas is working to obtain her Ph.D. in art history from the University of Delaware.

Proofreading was Floriani’s favorite. “I used those skills on the Government Law Review at Albany Law,” she says, “and I’m often the go-to for editing at work.” Floriani is a business development sales specialist for Thomson Reuters.

“It was great to experience first-hand the transformation of newspaper excerpts to riveting chapters,” Floriani says. “Don has a true gift for capturing readers in his story-telling tone.”

Miller continues to work with EXCEL Scholars on his research for the “Battle of Vicksburg” with Jason Hill ’16 (North Plainfield, N.J.), a history and neuroscience major, and Zachary Leff ’16 (Cheshire, Conn.), a history major.

Working for Miller, Hill paged through ancient copies of magazines like Harper’s Weekly, looking for gems. He’s found a long forgotten world, but it’s exciting to see elements of the present day poking around its edges – a modern turn of phrase or attitude shining through history.

“I love it,” he says. “I love the practical experience of it.”