Diane Nash’s life was threatened many times during the Civil Rights Movement of the 1960’s.

As cofounder of the Student Nonviolent Coordinating Committee, Nash led the Nashville sit-ins, the first successful civil rights campaign to integrate lunch counters in a Southern city, and coordinated the 1961 Freedom Rides from Birmingham, Ala., to Jackson, Miss., which led to desegregation of interstate buses and facilities. She helped initiate the Alabama Voting Rights Project and the Selma Voting Rights Movement, marching with Martin Luther King Jr. and other activists from Selma to Montgomery, Ala. 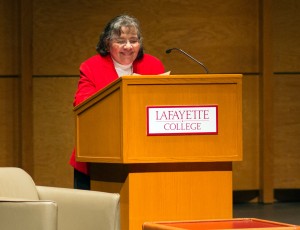 She and her compatriots accomplished all of this using nonviolent principles, despite the very real possibility of violent retaliation from police and local mobs.

“We were doing this for generations yet unborn,” she said to a packed audience at the Williams Center last week. “I want you to know that even though we had not yet met you, we loved you. We were trying to create the best society we could. Every generation faces its own challenges, and future generations are going to look to you to do the same.”

Nash stressed that the strategy of nonviolence, based on the teachings of Mohandas Gandhi, was much more than simply the absence of violence. It was the use of emotional power, a way of waging war without using weapons of violence.

“It is easy to see the power of energy in the components of a bullet, but love also produces energy. We were using energy produced by love instead of the energy of violence,” she said. “Gandhi developed a way where thousands of people in a concerted, coordinated manner can focus their love energy on an opponent instead of exerting violent energy.”

Nash called this “agapic energy,” a phrase she coined from the Greek word “agape,” referring to love of human kind.

“People are never your enemy; unjust political systems, attitudes, racism, sexism, ignorance, emotional and mental illness, these are the enemies,” said Nash. “You respect the person at the same time that you are attacking the attitude or action of the person. The issue with using violence to change social systems is you often kill or injure a person, but leave the oppressive system untouched.”

“I found it invigorating to hear someone talk about love in such a powerful way,” said Mikovic. “I feel like our society talks about love in very romantic and superficial ways. It was amazing to hear her talk about it like a power, like it could change things.”

Another basic tenet of nonviolence is that oppression requires the cooperation of the people who are being oppressed. Nash called oppression a “partnership” between the oppressed and the oppressor. Though if either party stops participating, the system will fail.

“Our position was ‘shoot us if that is what you are going to do,’ but they could no longer segregate us,” she said. “That presented Southern white racists with a new set of options. They had to indeed kill us, or stop participating in segregation.”

Nash also mentioned many of the social problems that plague the United States today, such as poverty, crime, government corruption, unemployment, mass shootings, and continuing race and class tensions. She said that the answers will not come from lawmakers.

“Can you imagine what would have happened if we waited for elected officials to desegregate lunch counters, buses, and get the right to vote?” Nash joked. “The movement of the 1960’s provides us with a legacy that you can use in 2016. But, you have to realize that no one will solve these problems, but you and me.”

“It was great to see another perspective from one of the greatest activists of our time, because that’s what we’re trying to do right here,” said Evans. “It’s refreshing to see someone who has done this before you and helped pave the way to set you in the right direction.”