Beth Mowins ’89, who became the second woman in history to call play by play for an NFL game, took on the same duties for the Women’s Final Four April 3 and 5 for ESPN. 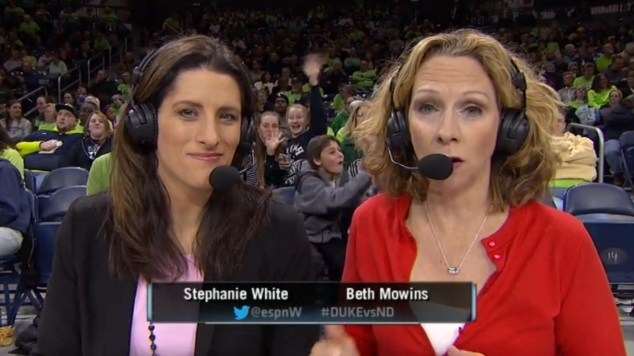 Mowins worked with Doris Burke and Holly Rowe in Indianapolis, marking the first time in ESPN’s 21-year coverage of the women’s championship that they are using an all-female broadcast crew. Mowins has covered the women’s college basketball Final Four for years on radio.

“This is the sport I played in college,” Mowins told the Associated Press. “It’s always been a special championship to follow on the men’s and women’s side. So an opportunity to call this along with Doris and Holly who I’ve known for 20 years in this business will be thrilling. I hoped one day to be playing in this and never could do that, so this is the next best thing.”

“It was pretty easy to select Beth Mowins,” ESPN senior vice president Tina Thornton told the Associated Press. “We have a lot of depth in our play-by-play world. She’s been involved with this event in some capacity for a lot of years. I don’t look at it being an all-female crew, I look at it as we put the best people out there and those are the best people on our team.”