In March, Stavros Kariofillis ’17 checked the Barry Goldwater Scholarship and Excellence in Education Program website practically every day. He kept close tabs on his email inbox.

When will they make the announcement already? He wondered. 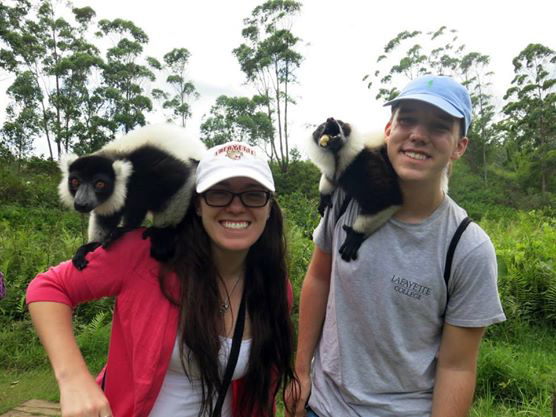 It happened when Kariofillis was in experimental biochemistry class. At least that’s when the Easton-area biochemistry major found out. On a break, he stepped out into the hallway and glanced at his cell phone. His email was filling up with congratulations from Lafayette professors who’d been just as anxious as he was.

And when Kariofillis returned to the classroom, his chemistry professor David Husic shook his hand.

Strock’s catch of the day

Like Kariofillis, Strock had been checking the Goldwater site daily. One day he saw his name, and a congratulatory email from Julia Goldberg, dean of advising and co-curricular programs, clinched it.

Strock is hoping to turn his major – environmental science with a focus on hydrology and aquatic systems – into a research job. Research, Strock says, was the job he’d wanted since he enrolled, but at first he’d set out to study chemistry. Through the EXCEL Scholars Undergraduate Research Program, he worked with Joseph Sherma, Larkin Professor Emeritus of Chemistry, to develop methods to identify counterfeit or substandard pharmaceuticals in developing nations. 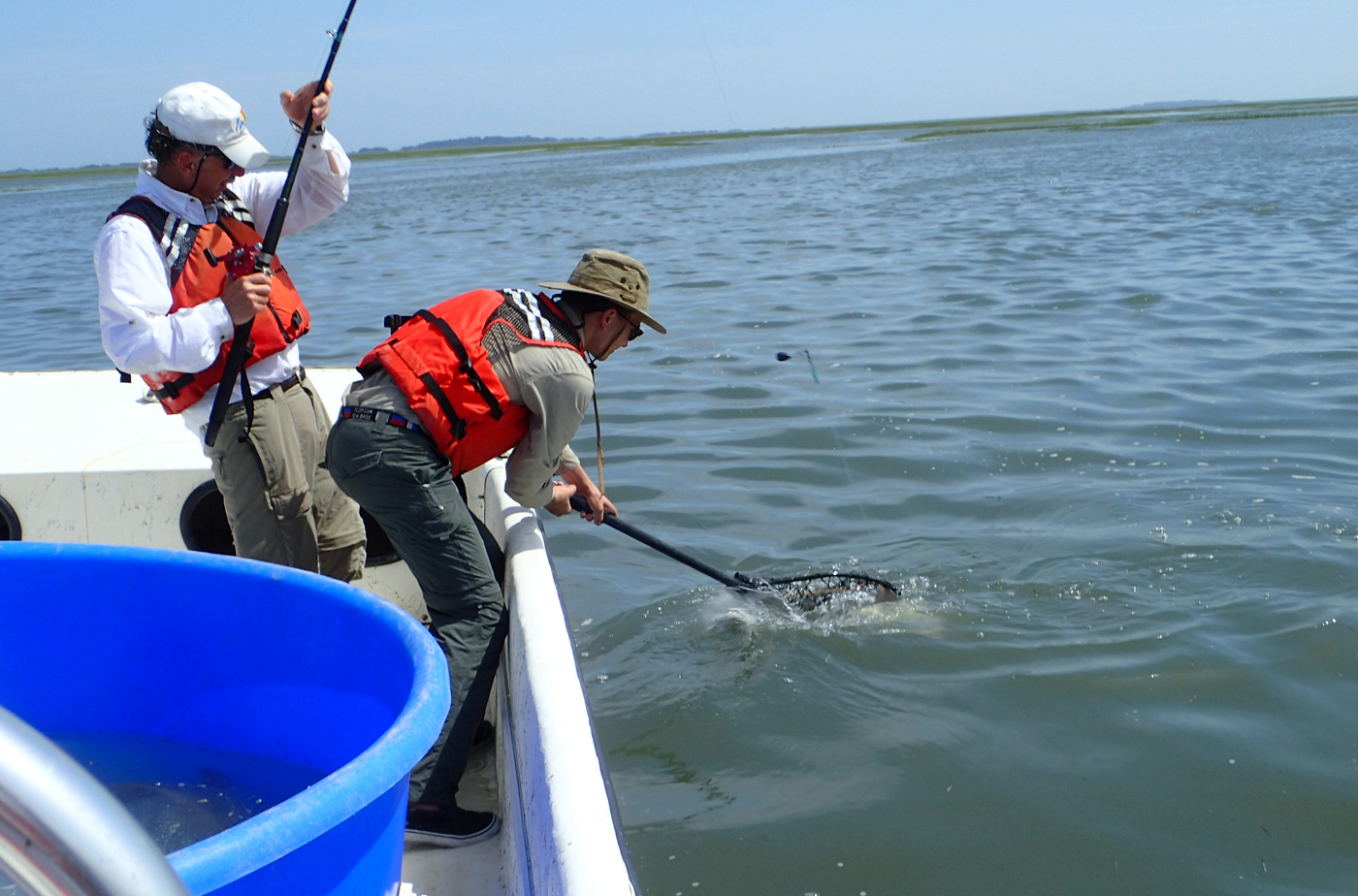 Richard Brill ’70 and Jacob Strock ’17 work together to catch a fish.

“I was always interested in fish,” says Strock. “I knew I wanted to do research. I enjoy the outdoors, so I thought I could do some service to the environment.”

When Strock first arrived at Lafayette, he’d brought with him a love for fly fishing. He rekindled Lafayette’s long-dormant fly fishing club. His classwork doesn’t give him much time today, but he still makes an occasional beeline for Easton’s three streams – the Bushkill Creek and the Delaware and Lehigh rivers — during warmer months.

He spent three months last summer working with fishery biologist Richard Brill ’70 at the Virginia Institute of Marine Science. He studied the effects internal gases, such as carbon monoxide, have on the vascular systems of shark, skate, and dogfish. His internship was very hands-on dealing with catching specimens, dissection, experimentation, and continuing data analysis.

Strock also performed research at the Woods Hole Oceanographic Institution in Massachusetts looking at the feeding habits of a variety of herring and will be returning to continue his work this summer.

Sky’s the limit for Jones

Across the Atlantic, as Kariofillis and Strock were fielding congratulatory emails, Jones found out her good fortune from an odd source.

Jones is studying abroad in Copenhagen, Denmark. A high school friend messaged her on Facebook with congratulations.

“I didn’t even believe her until I checked the Goldwater website,” she says. 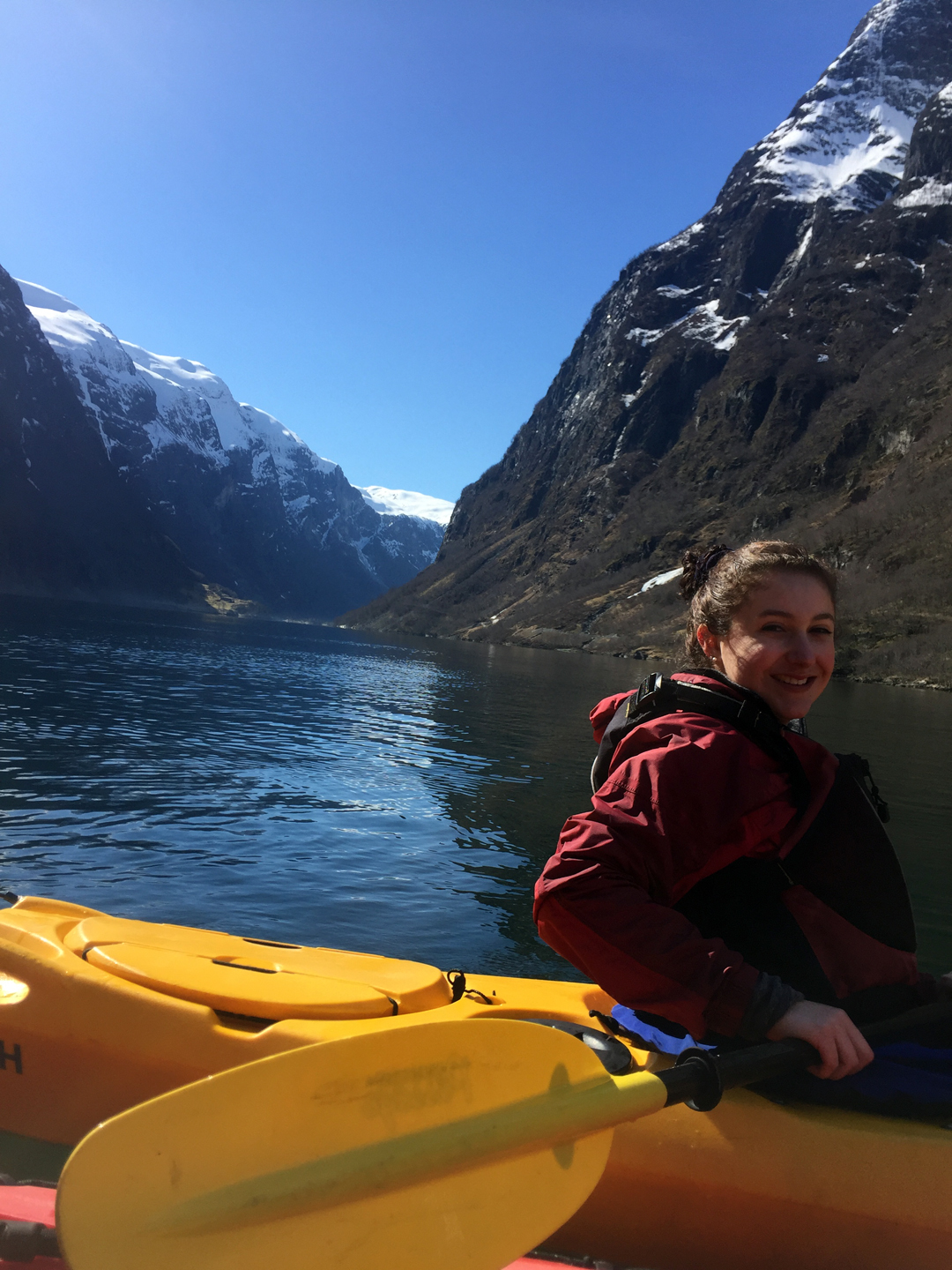 Jones’ research could take her farther from Easton than Europe. She’s interested in studying immunology in space. She hopes to work with NASA to learn about the effects of space flight on the immune system.

“I think that there is a lot to be explored in this area,” she says.

She wants to incorporate bioinformatics – an interdisciplinary field that uses computer software to understand biological data. “I think that really made [my application] more competitive, because bioinformatics is such an up-and-coming field,” she says.

Since her freshman year, Jones has partnered with Robert Kurt, Kreider Professor of Biology, on research examining the genetics of the CCL2 gene. CCL2 causes inflammation linked to tumor growth. She’s hopeful the research might one day lead treatment that could slow tumor progression in cancer patients.

Last spring, she and fellow biology major Tiffany Phuong ’16 (Aldan, Pa.) presented a portion of their research at the American Association for Cancer Research.

Copenhagen is one stop on a biomedicine tour for Jones. As part of the Danish Institute for Study Abroad, she’s made visits to European labs that perform cutting-edge stem cell research, as well as a biotech start-up company.

She’s also blogging for the program.

“I’ve never had a blog before,” she says, “and now my writing is being read by people all around the world.”

When he enrolled at Lafayette, Kariofillis had no idea pure research or chemistry was in his future. He’d been a biology major. “In high school I always struggled the most in chemistry,” he says.

Then, during his freshman year, he took a class with Roxy Swails, assistant professor of chemistry. “Something switched in my brain,” he says. “It just made sense to me.”

He enjoyed the course so much, that he took it on as a major and eventually “decided it was something I wanted to spend the rest of my life doing.”

Another mentor who has made an impact on Kariofillis’ academic life is Justin Hines, assistant professor of chemistry. Kariofillis has taken several classes with Hines and works with him through the College’s American Chemical Society student chapter.

Now, Kariofillis and Swails are working together on research to create water-soluble catalysts – chemicals that can cause substances to react in water that ordinarily wouldn’t. The research could impact the pharmaceutical industry as well as creating positive environmental change.

Kariofillis was also part of the Lafayette Initiative for Malagasy Education. The peer mentoring program helps Malagasy students navigate the daunting process of applying to U.S. colleges and universities. Lafayette students travel to Madagascar for three weeks during January break to work with students from the Lycee Andohalo public high school.