He will study Russian this summer in Kazakhstan. Twitter

Steve Berube ’17 has fallen under the spell of a part of the world many Americans couldn’t find on a map. 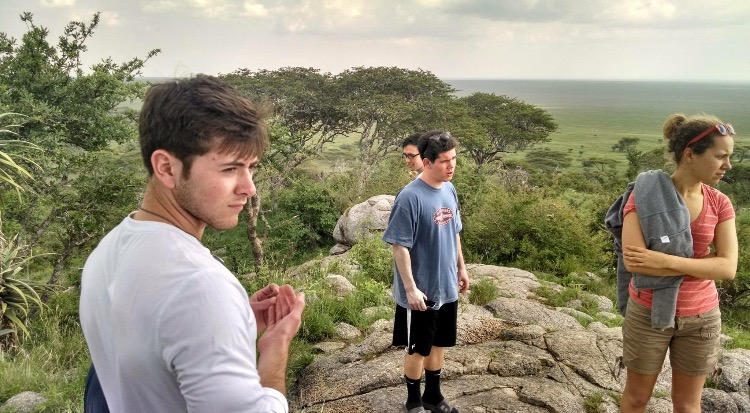 Steve Berube ’17, left, with other Lafayette students in Tanzania

The mountains of Central Asia, comprised of countries like Tajikistan, Uzbekistan, and Kazakhstan, are shrouded in mystery and rife with problems. But Berube (Shrewsbury, Mass.), who is pursuing a dual degree with a B.S. in civil engineering and an A.B. in international studies, is anxious to cut down language and cultural barriers to help. Help the region, help the world, and, by extension, help his home.

Berube’s passion for Central Asia brought Lafayette a one-of-a-kind honor this spring. He is the College’s first recipient of a coveted Boren Scholarship. Named for former U.S. Sen. David L. Boren, D-Oklahoma, the program is sponsored by the National Security Education Program, a federal initiative designed to deepen the pool of U.S. citizens with foreign language and international skills. In exchange for funding study abroad, Boren award recipients agree to work in the federal government for a period of at least one year.

Berube, who has taken interim trips to Tanzania and Russia, will use the funds to help defray the cost of eight weeks of intensive study of the Russian language among the snowcapped peaks of the Tian Shan Mountains. He will live in Almaty, Kazakhstan, for the summer.

“Living with a Russian speaking host family would immerse me in the language and Kazakh culture, thus strengthening my ability to forge meaningful and collaborative relationships,” he wrote in his application essay.

“Central Asia is a region of the world increasingly plagued by issues related to water scarcity and nuclear proliferation,” Berube says, “two highly intertwined problems. One day, I hope to help confront these international security challenges by improving U.S. and Central Asian cooperation.”

Berube’s study at Lafayette has helped him realize the region’s troubles in accessing water, and securing nuclear facilities left vulnerable after the collapse of the Soviet Union, aren’t engineering quandaries alone. Communication is a big hurdle.

In fall 2015, Berube worked with Kristen Sanford Bernhardt, associate professor of civil and environmental engineering, on an independent study that examined water management in Central Asia’s Fergana Valley. Berube believes the regional cooperation required to solve water issues could do more than quench thirsts. It could also stem the rise of ethnic tensions and religious extremism in the area and ultimately promote stability for the region.

In short, get warring factions cooperating on one regional issue and watch it spread. The trouble is the U.S. government doesn’t have many experts who know enough about issues such as nuclear proliferation, narcotics trafficking, and organized crime in Kazakhstan.

“Central Asia’s strategic importance to U.S. and international security in conjunction with the lack of regional experts, are considerable factors behind my interest in the area,” Berube says.