With quiet self-determination Quincy Miller ’97 has risen to the top of his profession.

After 10 years at Citizens Bank, where he was president of business banking, he was promoted last June to Massachusetts state president. In March he joined Boston-based Eastern Bank as vice chairman and chief banking officer and will become president next January, succeeding his long-time mentor and friend Robert Rivers. 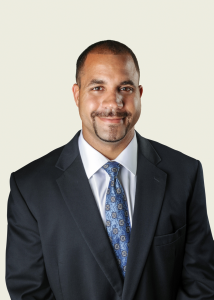 Miller’s steady voice exudes enthusiasm and passion. He says his foundation for success rests in the examples set by his mother, who raised two sons by herself, and his grandparents when he was growing up in the inner city of Harrisburg, Pa. His own competitiveness and desire to prove himself also fuel his focus: service to others.

“I want to demonstrate that with the right approach and hard work you can be successful. You have to keep grounded and stay humble. Helping others achieve their goals helps me achieve my goals, which makes the team successful and thus the company.”

Miller was named to the 2016 Get Konnected list of Boston’s 100 most influential people of color. He attributes his success as an African American in a sector that generally lacks diversity to his consistent objective of demonstrating his ability to do a job with excellence and then asking his supervisors what he needs to do or learn to progress to the next level.

A key advancement was his promotion in 2006 to retail banking director for Citizens Bank in Ohio, with responsibility for 100 branches. There was an obstacle: “It was the lowest performing market, and I could only propel my career if I could turn it around.” Helping paint a vision that inspired 800 employees, he led efforts that raised the bank to the top quartile the first year, to the top the second.

“You have to understand what is important to employees at all levels,” says Miller, who values getting to know employees individually. His favorite position is teller. “They are on the front line, closest to our customers, and that is key to the service industry. You have to bridge the gap between what happens day to day and the strategic direction of the company.”

Founded in 1818, Eastern is the nation’s oldest and largest mutual bank, with assets totaling $10 billion. It is a community bank. “What we do is for the customers, not shareholders. We give 10 percent of our net income to charity each year and are committed to advocacy and diversity.” Miller serves on the boards of the Urban League of Eastern Massachusetts, Bottom Line, Zoo New England, and Greater Boston Food Bank. He is a member of Lafayette’s McDonogh Network Steering Committee and Career Services Employer Advisory Committee and an internship sponsor.

An economics and business major in college, Miller began his career in a management-development program at M&T Bank. “I learned all aspects of the banking industry and was able to apply leadership skills I had gained as captain of the football team and president of Brothers of Lafayette.”