When the brothers of the Rho Chapter of Delta Kappa Epsilon (DKE) discussed their goals for this year, they aimed high. They wanted to win the Lion Trophy – the highest honor that a DKE chapter can receive. 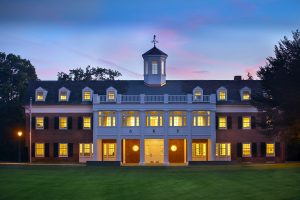 At this year’s DKE International Convention, the Rho Chapter not only brought the Lion Trophy to College Hill for the first time in chapter history, but it also was the only chapter to place in all four categories: scholarship, chapter operations, community service and philanthropy, and leadership. Former chapter president Ryan Flynne ’16, a mathematics and economics graduate, won the Nick Napolitano Outstanding Chapter President Award, and Michael DeLisi ’03, president of the Rho House Association, won the William M. Henderson Alumni Award.

“Bringing home so many awards to Easton is a testament to our students’ hard work to celebrate and commemorate DKE’s 160th anniversary at Lafayette,” says DeLisi, a program manager for Norhrop Grumman and former Rho president and treasurer. “Their success at achieving this lofty goal is a terrific accomplishment.”

The chapter celebrated its 160th anniversary with the opening of its renovated chapter house during Homecoming Weekend 2015. President Alison Byerly says the project, which transformed living spaces and added common areas for social events and meetings, provides a model to draw on for living-learning communities at Lafayette.

The Rho chapter is committed to being an exemplary organization and contributor to campus life, says current president Sean Menarguez ’17 (Basking Ridge, N.J.), a biology major. The chapter has been making concerted efforts to improve its academic and philanthropic performance.

Since 2011, Rho alumni have hosted a leadership development program for chapter officers to guide them through strategic planning, helping them write a five-year vision for the chapter and creating initiatives to fulfill their annual mission. Now, those first students who went through the workshops are leading them for current students. These workshops have been instrumental, says DeLisi, in the chapter’s improved academic performance and deeper commitment to service.

The chapter also holds a faculty speaker series, inviting faculty to share a meal and lead a discussion on a topic of the faculty member’s choice, and hosts a faculty reception at the Rho house each spring.

Last year, the chapter identified service as one of its strategic initiatives, raising more than $14,000 and completing 953 hours of community service during the spring semester alone. Rho brothers regularly volunteer at the Safe Harbor homeless shelter, where they prepare and serve a meal once a month to between 40-60 clients; the Sigal Museum; and Northampton County Historical and Genealogical Society in Easton. 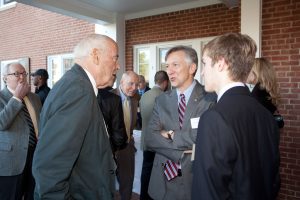 Students and alumni mingle at the house dedication ceremony.

The chapter’s improved philanthropy earned it the Aaron O. Hoff Award for Commitment to Service. The chapter also was the only Greek organization invited to present at the College’s Community-Based Learning and Research Expo, where it shared its work with the Leadership Center.

Despite its success, the Rho chapter is committed to doing more: “The chapter is ecstatic about the Lion Trophy, but we understand that there is still room for improvement,” says Menarguez. “Our values instilled in us as Dekes and Lafayette students are to never settle and always aspire toward higher accomplishments.”