Chris McCumber’s ’89 life is beginning to resemble one of the TV shows he pitches.

OK, picture this. A guy at a small liberal arts college majors in government and law but gets his kicks running a radio station in the basement of a campus building. He works his way up to the head of a major cable network, then in the past two years the media landscape has totally shifted. And when he returns to his alma mater, he finds a popular media studies program, with devoted new buildings, box theaters, and studios.

For lunch on Sept. 30, McCumber – now president of the USA Network—noshed pizza and chatted with a standing-room-only crowd of Lafayette students in the brand-new home of the film and media studies program at 248 N. Third Street. It’s part of the arts campus that has been blooming at the base of College Hill in the quarter century since McCumber graduated.

He showed the students an old photo of himself playing the drums in his college band, Fundamentalists in Drag. It was from a show in the basement of what is now Hogg Hall.

“Truly,” McCumber says, in those days “the only place we had for arts was the basement of Hogg Hall. Just walking around this entire arts campus has been mind-blowing for me.”

In a sense, the College’s version of a media studies program when McCumber was a student was a start-up. Start-ups have been a theme of McCumber’s career. As a Leopard, he wasn’t sure where he wanted to go. He followed his interests and looked for ground floors.

“I never would have thought I would have done this,” he says. “My career has always been about curiosity.”

He considered law, but then interned at an Allentown TV station. In the early 1990s, he landed another internship with MTV. At the time, in a small room of the company, a new TV network called Ha! was taking shape. Ha! had four employees. McCumber took a job there as a production assistant. Ha! eventually became the cable bellwether Comedy Central.

In 2001, when he was named head of on-air programming at USA Network, “USA was not in good shape,” McCumber says. “I remember … there were tumbleweeds going down the hallways. It was a network that had been left for dead. And I kept telling the team, you work now for the world’s largest start up.” 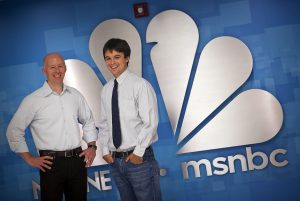 Eventually, McCumber became the head of both USA and the SyFy network.

In those days, cable was booming. “We were the disrupters,” he says. “If you worked in cable, you were disrupting the TV world.”

Now, with the advent of digital technology and video-on-demand services such as Netflix, Hulu and Amazon, McCumber finds himself needing to begin again. The game is different—it’s not so much about ratings anymore; it’s about scripted shows with small, devoted audiences.

McCumber talks a lot about original programming, using terms like multyculty (TV speak for multicultural). “Think of it as Inception meets the Matrix,” he says of a new show called Falling Water on USA. “The idea that we’re all dreaming a collective dream. If you can own those dreams and harness those dreams, you can control the world.”

“In your quest to build the network are you involved with the people who make the stories, the screenwriters and the editors?” asks retired German Prof. Edward McDonald.

“Very much so,” McCumber says. “That’s one of the wonderful things about the job.”

For example, the creator of the Emmy-winning USA hit Mr. Robot, Sam Esmail was a complete unknown. Then the young, New Jersey-born filmmaker met with McCumber and his staff, who’d loved his script for the pilot. Esmail carried with him “a Bible,” showing how the entire series would progress over five seasons.

Like McCumber, Jessica Eggers ’17 had an externship at MTV over the summer. She studied the effects of non-linear—series you can watch on services like Netflix̴—on traditional, or linear, TV. “I was wondering if you think there’s a way to use non-linear forms to your advantage to draw people back to linear,” she says.

“What we tend to find now is that when people get in a lane, they stay there,” McCumber says. “People fall into habits.”

“Did your major help you?” asks another student.

“It helped me to argue my thoughts,” he says. McCumber particularly found the classes of Joshua Miller, professor of government and law, helpful because “they were all about reading, discussing and debating. And then writing.”

But McCumber hadn’t chosen government and law because he hoped it would make him a better network president. He chose the major because he found it fascinating.

“The best way to predict the future is to create it,” he says. “Don’t worry so much about in the future it’s going to be X,Y, Z. Take some chances. Build something from the ground up, but put your passion into it and ultimately you’re going to be successful.”