With a giant cloud of hair bobbing furiously, Sohrab Pasikhani ’18 wends his way through a crowded Farinon College Center on election night between blue and red maps of America.

Pasikhani hustles through scrums of students in robin’s egg-colored T-shirts. They’ve commandeered half of Farinon’s first floor to serve as a behind-the-scenes crew of poll watchers, map makers, and social media monitors. The other half of Farinon offers space for cameras and Leopards in formal attire preparing to drop some political science on live TV during the nation’s biggest night.

This time, as it is every four years, the election night results study is on live TV. The production starts at 9 p.m. on PBS39/WLVT, the affiliate in the Lehigh Valley. 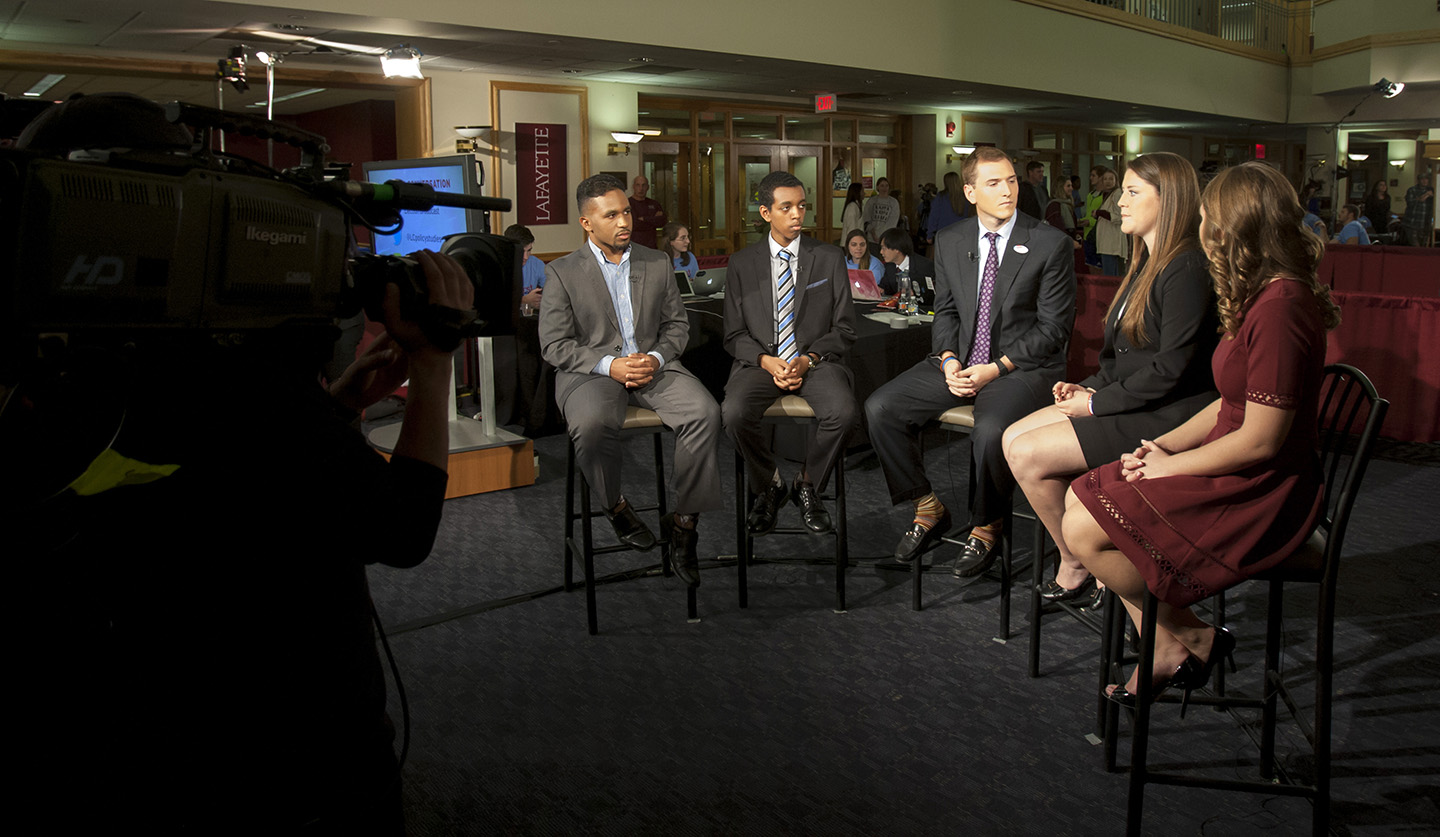 The two-hour broadcast is the culmination of months of preparation from a massive team of students. They’ve researched issues and candidates, written scripts, and prepared storyboards.

They also filmed taped segments that will run during the broadcast, interviewing politicians and experts on topics like the role of social media geo-targeting in campaigns, how this election will affect local business, and the Affordable Care Act.

Twenty minutes before go-time, Pasikhani runs between the backstage and on-camera teams, chatting and staring into computers screens. “I have to make sure they –” he points to a group charged with tracking election results on news sites like The Washington Post – “can communicate with them.” He gestures toward another team, which will use a mapping software called RGIS to turn vote tallies into detailed maps the on-air students can use to illustrate their points during the broadcast.

Pasikhani isn’t a budding journalist. An electrical and computer engineering major, he busies himself more with mechanical conduits rather than human ones. But on this night, he needs to make sure humans and machines can interface properly.

“I just like stuff,” he says as the clock ticks toward air time. “I like doing stuff outside of the norm.”

Weeks earlier, Pasikhani was focused on maps. The electronic kind with blues and reds that show graphically who our next president would be. Two weeks ahead of the broadcast, Pasikhani found a group called 270 To Win, which allowed them to use their interactive map display for free.

“Everything is working,” he says. 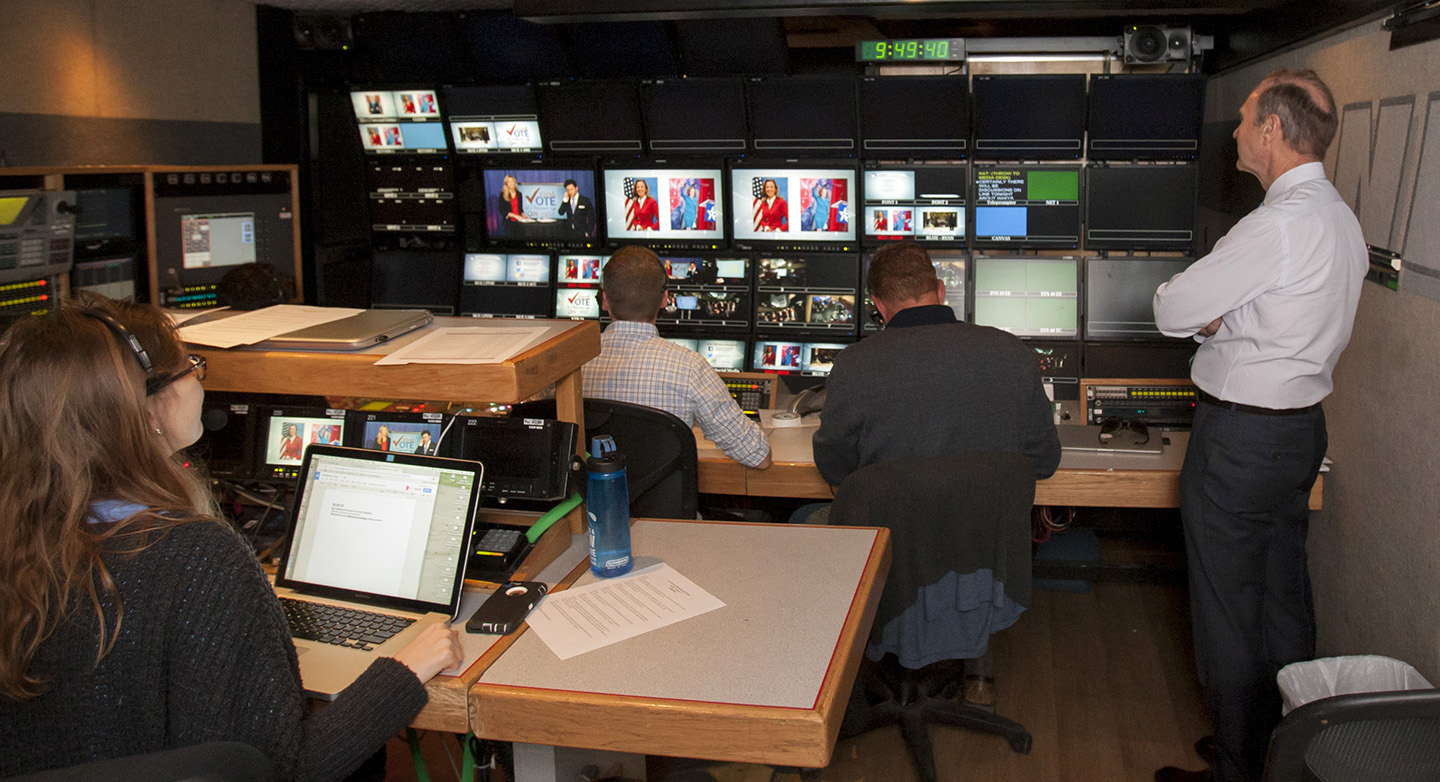 During the final preparations, Mark Crain, Simon Professor of Political Economy, wanders between Farinon and the production truck stationed in a nearby parking lot. He’ll spend the bulk of the broadcast in the truck, helping to direct his 130 student participants.

He smiles at the nervous preparation.

“They’re pumped and ready,” Crain says. It is the fourth time he’s produced a Lafayette show covering a presidential election, going back to 2006. Together, Crain and his co-executive producer, Prof. Nicole Crain, put together Lafayette Lens, a half-hour student-run news magazine that explores issues of global importance from the perspectives of tomorrow’s leaders.

“For many of them it’s the first time they’ve paid attention to national politics,” Crain says of the students participating in the election night broadcast. “So you see it from a fresh perspective. Are they disgusted by this? You get a range of feeling.”

Students from an array of majors are represented. Many are studying government and law, like self-proclaimed political junky Benjamin Janacek ’18, who since May has been producing a weekly election update in a Google Doc for the team. Janacek is the political director of the production.

Some, such as Pasikhani, are from seemingly unrelated majors. Danielle Wolff ’17 is a neuroscience and economics major. She’d participated in a Lafayette Lens broadcast and signed up to help with the excitement of election night.

“Working with the Crains is wonderful,” she says.

Andrew White ’18, an economics and policy studies double major, is among a gaggle of 20 or so students hunched over computers monitoring websites and social media to provide the broadcast with that perspective. 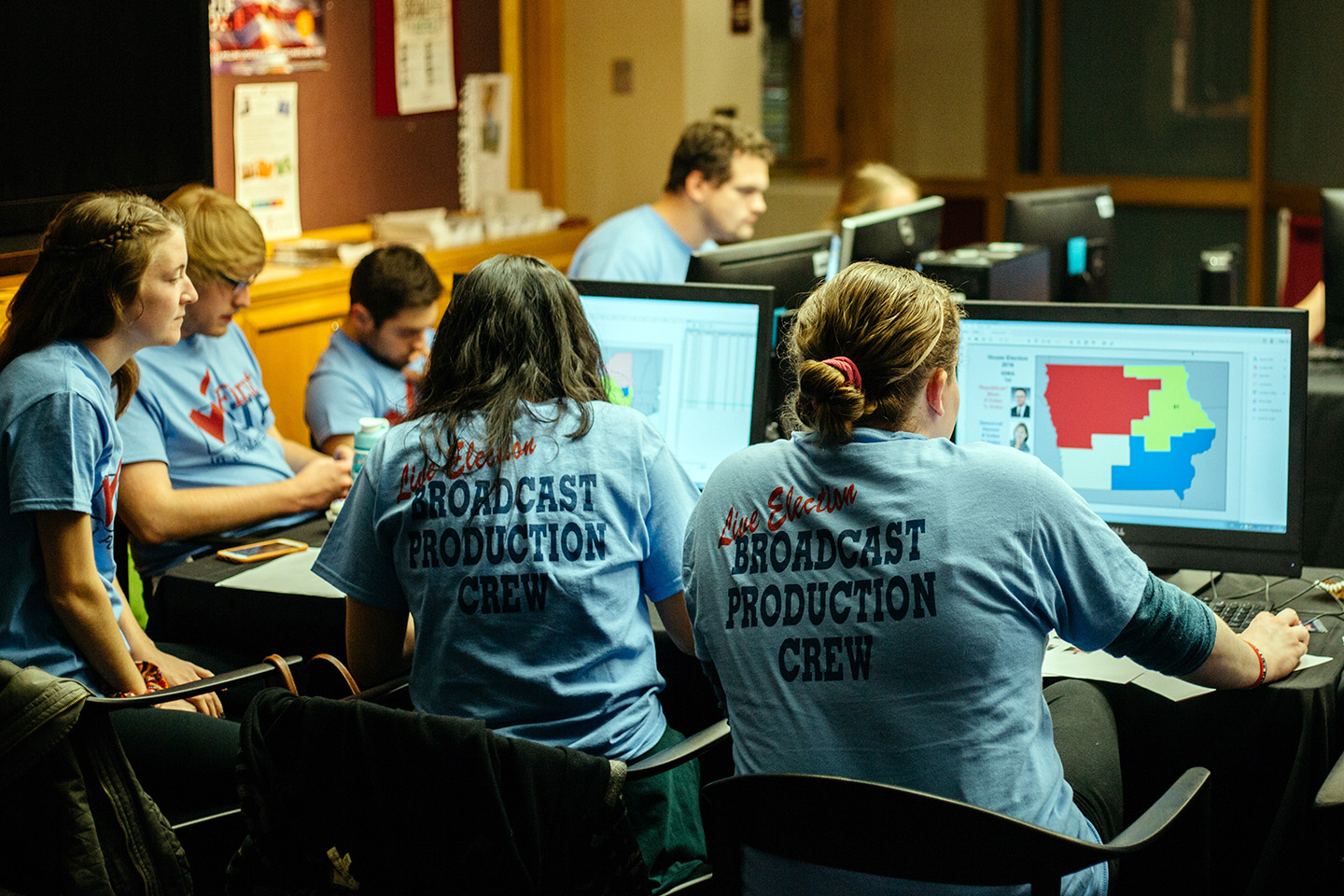 “Figuring out what’s trending. What are the main headlines and comparisons,” he says. “We find a lot more opinions on social media.”

How will that help him in a future career?

“Managerial skills,” he says. “Being able to organize a group of people, bring everything together and create one cohesive piece of work.”

That’s the point, says Nancy Werteen, a reporter with WFMZ-TV, an Allentown, Pa., TV station.  “The goal is to help give them something they can use their entire life no matter what they go into.

Though many of the students are strangers to television journalism, TV professionals such as Werteen and representatives from PBS helped coach the students, offered suggestions for the pre-taped vignettes and helped them produce what would ultimately be a slick TV news production. 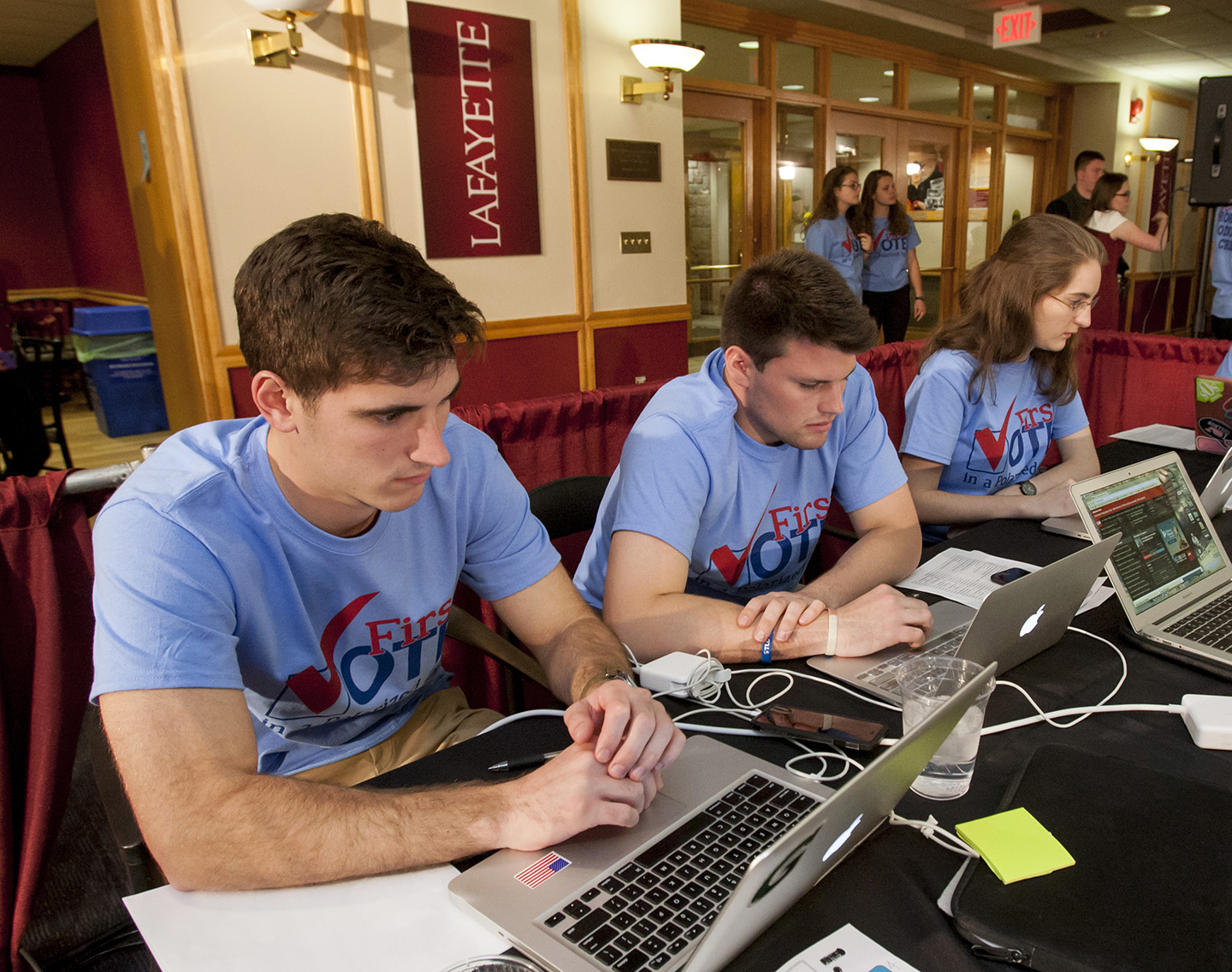 “We have to watch ourselves because we have so much lingo,” Werteen says. “But really what we try to tell them is be yourself and have fun.”

The anchors of the broadcast, Frank Illuzzi ’18, a government & law and film & media studies double major, and Kat Stevens ’17, an economics and policy studies double major with a Spanish minor, sit in front of spotlights in cameras, under healthy dollops of makeup. They’ve been preparing for this moment for weeks.

“We’ve been going over it quite a while,” Illuzzi says. “We know the script. I feel confident the script is good and we’ll both do a good job presenting it, it’s just whatever comes up is the most concerning part.”

That could be someone jumping in front of a camera, interrupting the broadcast. 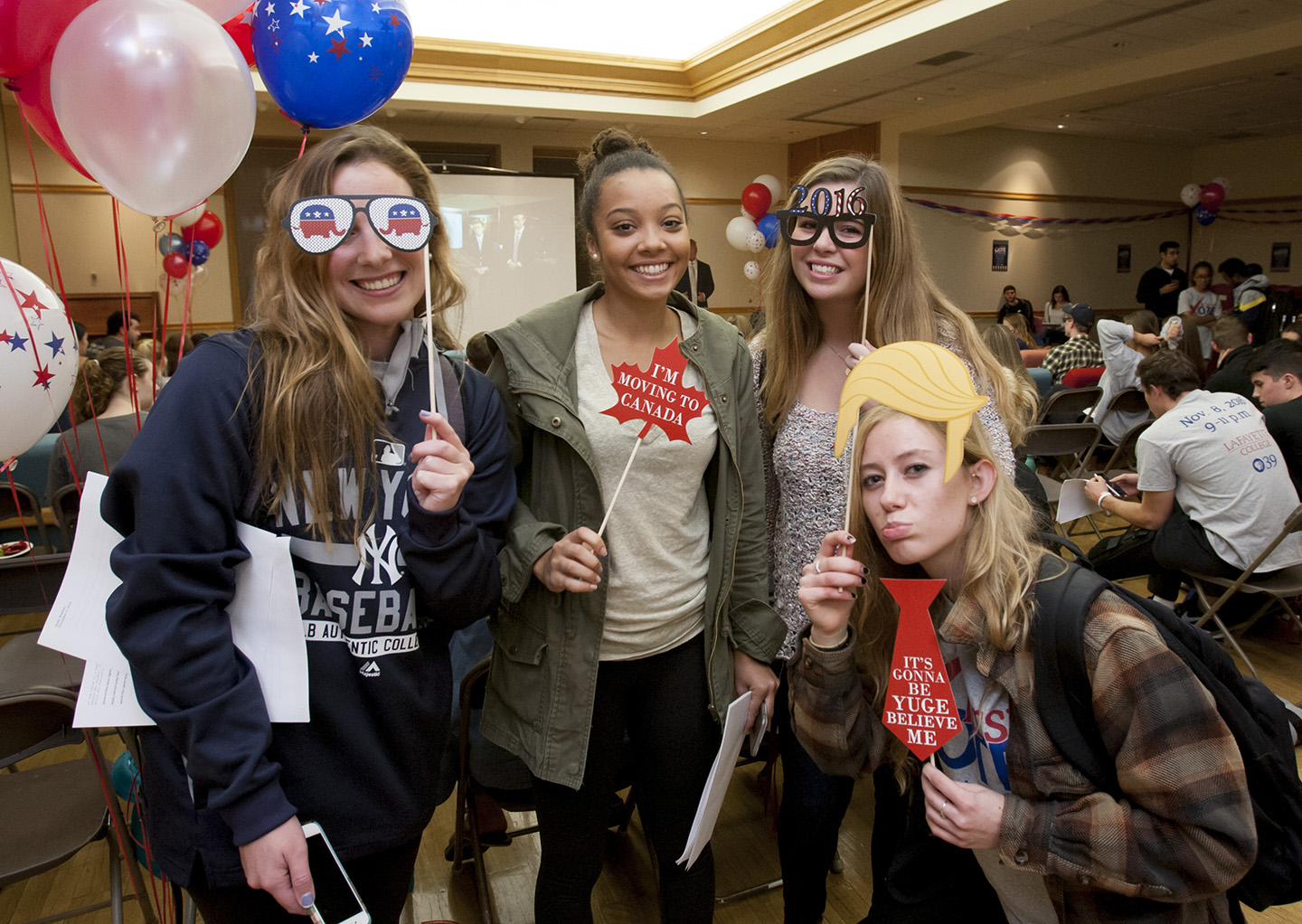 A few minutes before 9 p.m., someone yells for quiet. The roar of the broadcast team and the dozens of students who’d come out to watch falls to a low rumble.

The hosts are queued. Stevens and Illuzzi give their opener, and the camera rolls from panels of students discussing issues to political experts giving insight into Pasikhani’s maps.

Several hundred yards away, students and TV technicians in the production truck watch the live camera feeds on monitors. They talk to the hosts through headsets.

“OK,” someone barks, “we’re going to the bullpen next. All five mics.” On a monitor, one of the camera angles shifts. “You just have to stand closer together; you look like you’re going to fight when you’re that far apart.” 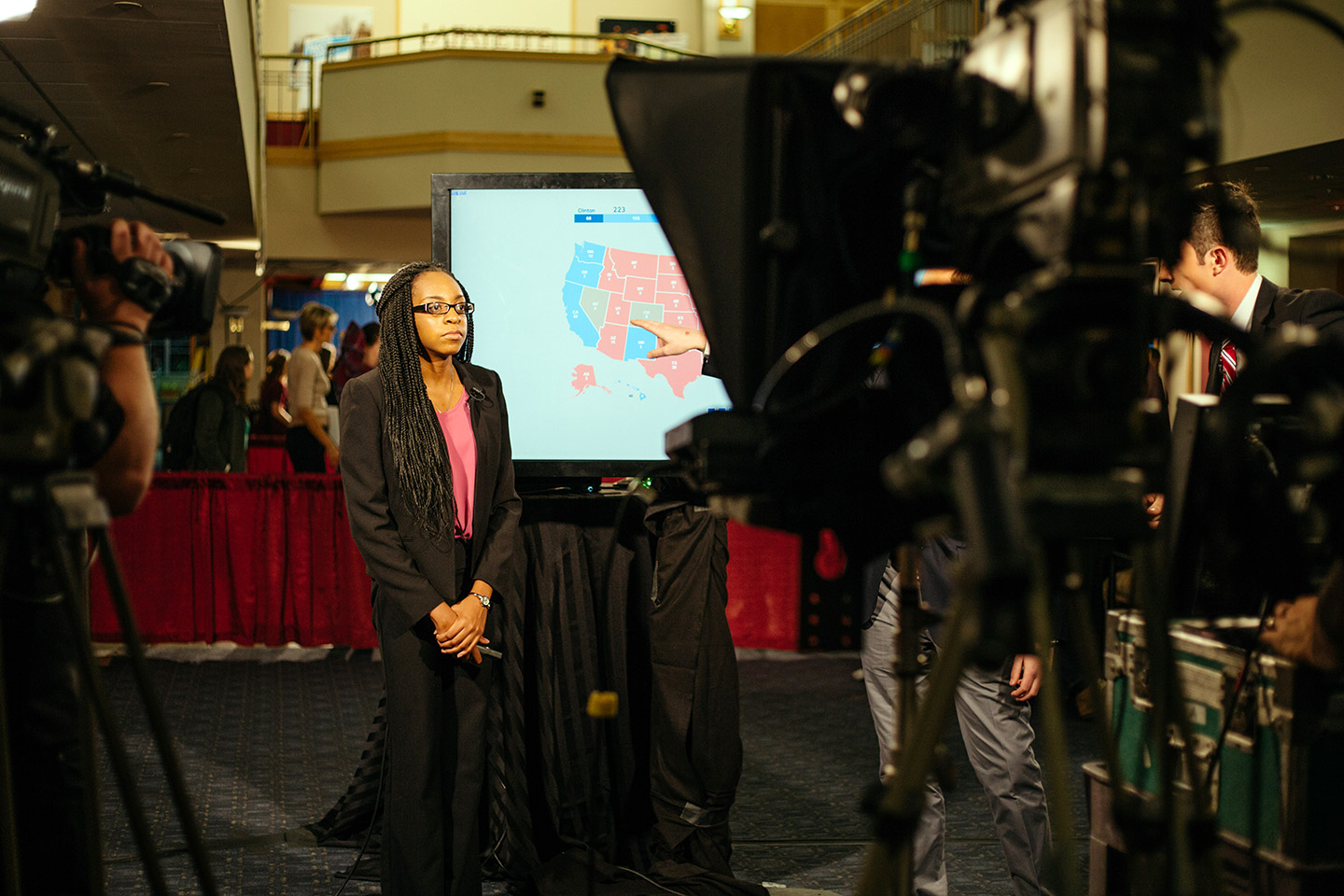 “Communication is the biggest challenge,” Mark Crain explains. He’s seated at the back of the bank of instruments on the truck, helping to control the massive production.

Though no enthusiastic students leap in front of the camera, as Illuzzi and Stevens worry, it doesn’t go off without a hitch. Three cameras fail. A frenzy of technicians work to resuscitate them.

At 11 p.m., a new president hasn’t been named, but the Lafayette broadcast wraps.

As the camera cuts away, Illuzzi and Stevens each breathe sighs and seem to deflate. High fives and hugs take over the room.

“It went great,” Janacek says. “It was really smooth. That two hours felt like two minutes. I can’t believe it’s 11.”