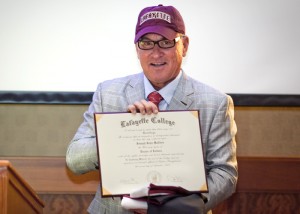 First Joe Maddon ’76 helped the Chicago Cubs face down 108 years of history, leading them to an epic World Series victory. Then he reveled in the win with five million deliriously happy fans. Now this Lafayette alum is heading back to College Hill to celebrate.

As part of the College’s Rivalry Week festivities and in support of their Respect 90 Foundation, Maddon and his wife Jaye are holding a party and concert on campus 8:30 p.m., Friday, Nov. 18. Using a favorite catchphrase that helped lead the Cubs to victory, it’s called the “Try Not to Suck” party. The event is open only to members of the Lafayette community.

Sponsored by the Maddons and alumni of Zeta Psi, the event will feature live music by “The B Street Band,” a popular Bruce Springsteen Tribute Band. A longtime Springsteen fan, Maddon introduced The Boss’ music to Will Forte, his childhood friend and the B Street band’s founder. The opening band is Walla.

Maddon will also attend the 152nd matchup between Lafayette and Lehigh—college football’s most-played rivalry—on Saturday, Nov. 19, 12:30 p.m. at Fisher Stadium. Some game tickets are still available at www.goleopards.com. Leading up to the game, students will have a ball Nov. 15–19 during Rivalry Week, which features a variety of campus activities.

T-shirts will be available for purchase Friday and Saturday to support the Maddons’ Respect 90 Foundation which supports various charities including the Hazleton Integration Project (HIP). This community-based effort promotes interaction between people of different ethnicities and races in Maddon’s hometown of Hazleton, Pa. HIP’s Hazleton One Community Center hosts educational, athletic, and cultural activities at little or no cost to participants while fostering trust and respect among all of the region’s ethnic cultures.