Charles “Charley” Hugel ’51, trustee emeritus and one of the College’s most devoted supporters and benefactors, died peacefully Dec. 5 at his residence in the Sugar Hill Retirement Community in Wolfeboro, N.H. 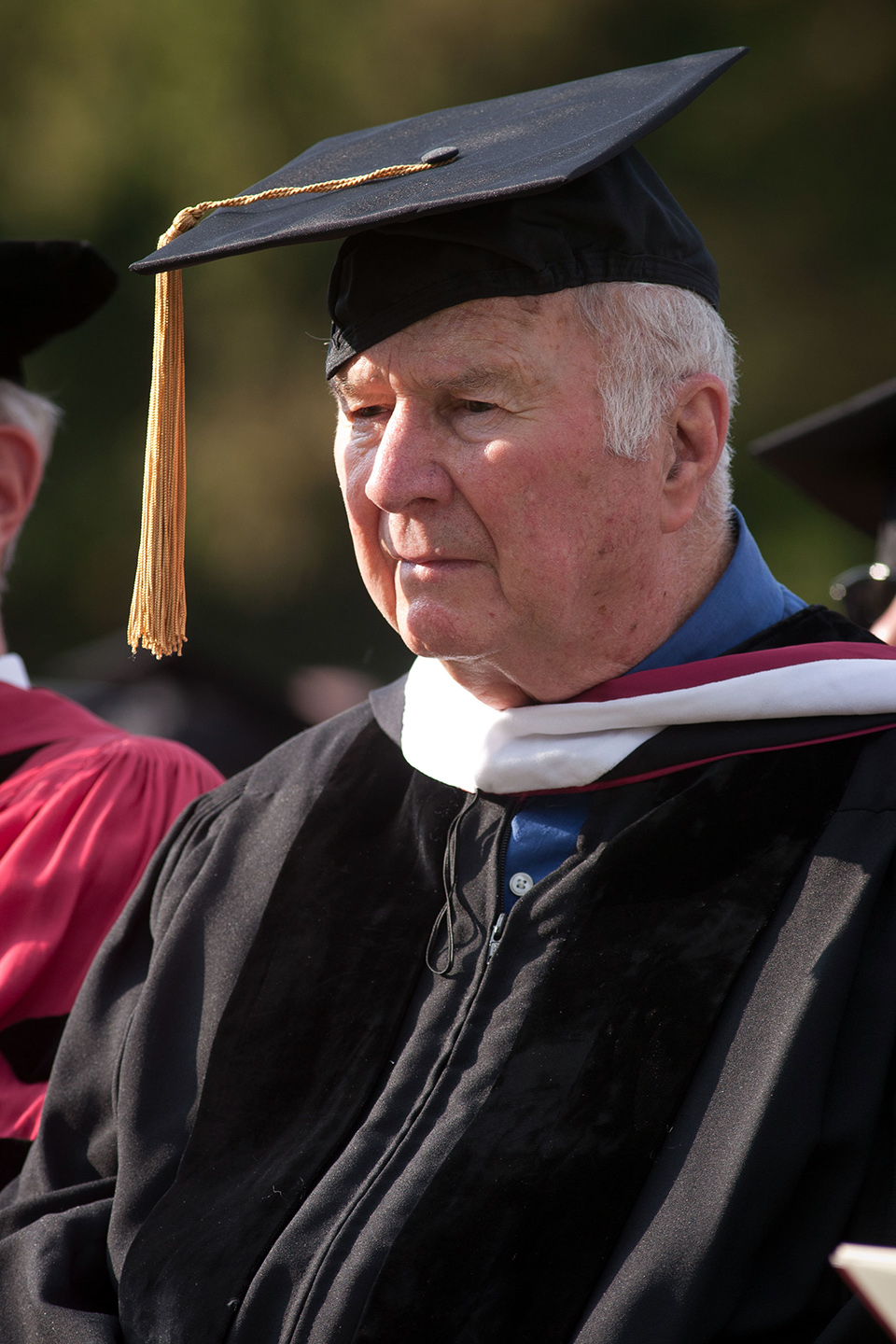 “He is one of the people who have made an enormous difference at Lafayette,” says President Alison Byerly. “He was a giant in industry and a giant to the College. His legacy will continue to benefit students in so many ways. I have the deepest respect and appreciation for Charley and his wife, Nina. He will be deeply missed.”

Hugel’s 88 years are the stuff of an Ian Fleming novel, minus the tuxedo (he refused to wear one). There’s corporate intrigue, helicoptering with world leaders, and a rags to riches backstory that begins in a tiny apartment in Plainfield, N.J., where he was raised by a single parent during the Depression. It continues through a corporate suite at one of the two Fortune 500 companies he headed simultaneously while serving as chairman of the College’s Board of Trustees.

“He had tremendous energy and breadth and depth in so many aspects of the world,” says Ed Ahart ’69, chairman of the Board of Trustees.

Ahart recalls several board meetings where Hugel had to leave early because he and his wife were flying to Moscow to meet with then- Soviet Union President Mikhail Gorbachev, whom Hugel referred to as “his friend, Mike.”

“From there they would often helicopter to Siberia. I’m not sure what they did in Siberia but it gives you a sense of the scope and energy of the man,” says Ahart.

Hugel’s dealings with “Mike” were related to a historic multibillion-dollar agreement he had brokered as CEO of Combustion Engineering to help build and manage a petrochemical complex in two Western Siberian cities.  It was the first venture between a U.S. company and the Soviet Union, and Hugel’s dealings were of keen interest to the U.S. government.

“The CIA debriefed my dad after several of his trips to the USSR and they told him that they received more meaningful intelligence from him than they had in the previous decade,” says Hugel’s son, Jeff. “I remember he said that the Russians had the ability to cause problems, but they only could do something once due to the instability of their infrastructure.”

Hugel wasn’t always so well connected. “Charley grew up a very poor kid who never thought he could go to college,” says Trustee Emeritus Gary Evans ’57. “He was not in a college preparatory program but Victor B. Liske ’33, who was a teacher at his high school, took an interest in him. Since Charley hadn’t completed the necessary courses to prepare him for college, Victor arranged for two teachers to teach him the necessary content, with one coming in early in the morning and the other staying after school to tutor him in subjects he did not complete.” 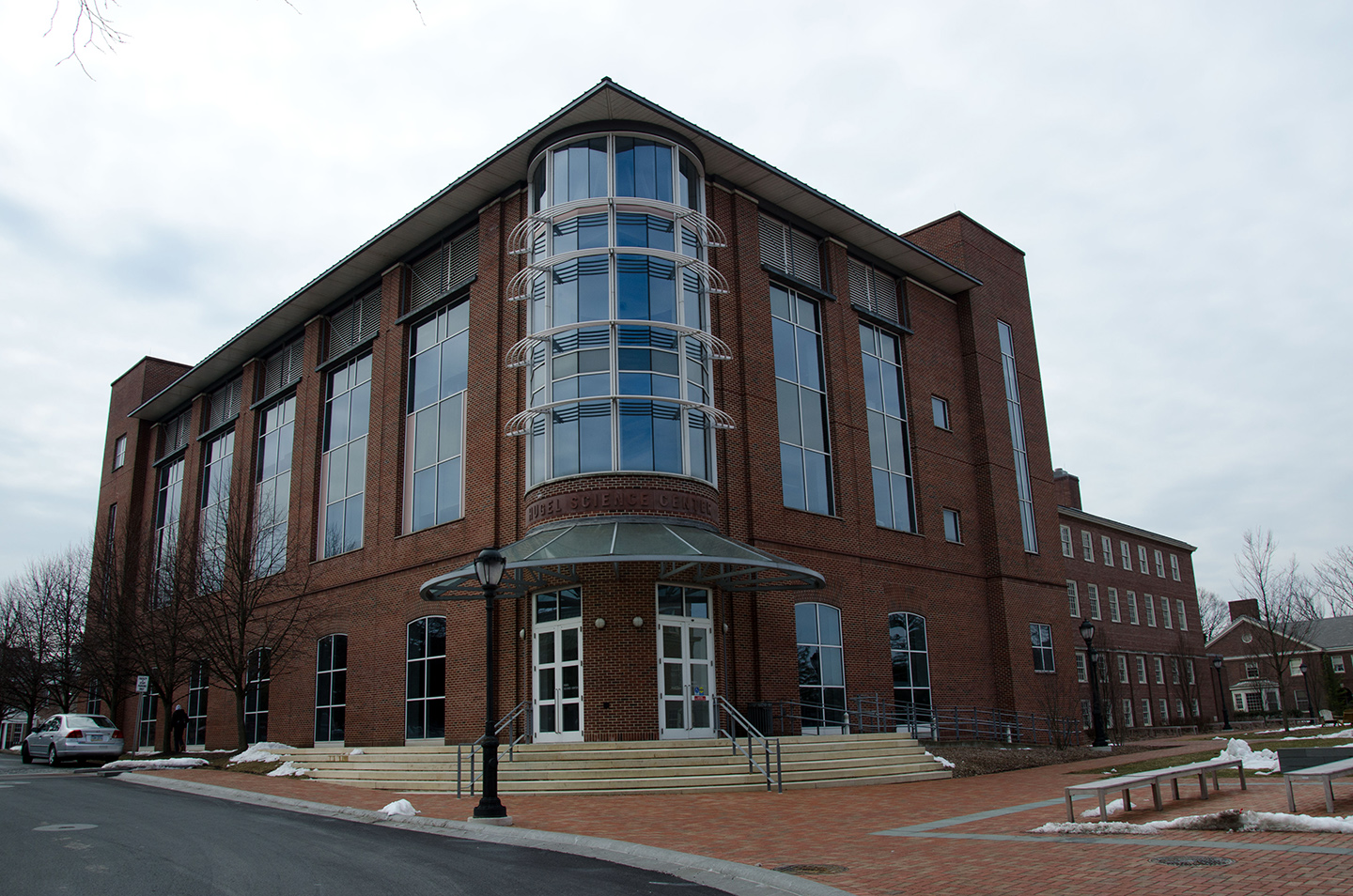 It took him an extra year to get through high school, but with Vic’s help, he received his diploma and found his way to Lafayette where he began studying psychology. After graduating and finishing a stint in the Army, he signed on with New Jersey Bell Telephone Company as a student engineer. Soon after starting his job in 1952, he bumped into Nina Fischer, a former classmate from grade school and high school, in the company lunchroom. The two married a year later.

But it wasn’t long before he was back in the C-suite as CEO of Combustion Engineering.  At the same time he was serving as a director at RJR Nabisco, a tobacco and packaged food producer. In 1987, he became chairman of the RJR board, making him one of the only people to hold such high-level positions at two of the country’s largest corporations at the same time.

At RJR, he presided over the corporation’s controversial leveraged buyout by Kohlberg Kravis Roberts. The takeover was chronicled in The New York Times’ bestselling book Barbarians at the Gate. The book was later made into an HBO movie.

“The truth behind the RJR/Nabisco leveraged buyout is that all of the activities that led to Barbarians at the Gate only occurred because my father was committed to getting the best deal possible for the stockholders of the company,” says Jeff Hugel. “Several months before Ross Johnson and his management team officially made an offer to buy the company, my father was offered approximately $20 million in stock options to approve the deal.  Of course my Dad knew that such an offer was not only immoral but illegal, and he was shocked. I remember him telling me that he thought they must be crazy because he knew that if he had accepted the deal that ultimately all that money would have been taken away from him and when he eventually got out of prison, he’d have no friends.

“Morality and integrity are the two biggest gifts that have been passed on to me by my parents.”

Hugel joined the Lafayette Board of Trustees in 1977, after a two-year term as president of the College’s alumni association. He was elected vice chair of the board in 1981 and chairman in 1986, a position he held until retiring in 1992 when he was elected to emeritus status.

“Charley was a very strong personality. He was very much in charge of the board,” says Ahart remembering a meeting where Hugel held court in front of the room.  “He said we need to create a really strong study abroad program because the world is changing and we need to do this for our students. So we did.”

Hugel was also deeply engaged in philanthropy and headed the capital portion of The Campaign for Lafayette, which concluded in 1985 and raised more than $53 million, a record for Lafayette at the time. Ten years later, he signed on to chair the Lafayette Leadership Campaign, and helped raise $213 million, more than $60 million above the College’s goal. The College named the Hugel Science Center in recognition of the couple’s $10 million commitment to the campaign.

An earlier gift from the couple endowed the Cornelia F. Hugel Chair in History, now held by D.C. Jackson. The chair is named in honor of Nina Hugel, who was a history major at Smith College and “the woman behind the man in their 64-year marriage,” according to Jeff.

Hugel explained at the time the couple’s decision to endow a chair: “Nina and I have often discussed the fact that America’s future will be decided not only by our domestic policies but by how we adapt to global developments.”

In 1987, the Hugels were inducted into the Societe d’Honneur, an organization that recognizes the most significant benefactors to the College.

Despite Hugel’s sophistication and worldly milieu, it’s doubtful he donned a tie and tails for the event as he “hated formal dress,” says Ahart. “He wouldn’t allow us to have any formal occasions requiring a tuxedo.”

It’s no surprise then that Hugel never forgot his humble roots or the College that gave him his start.

“He always felt indebted to Lafayette for giving him a firm foundation that led to his successful business career,” says Jeff.

Charley Hugel is survived by his wife, Nina, sons Jeff and Chris ’83, granddaughters Lt. Lauren E. Hugel ’06 and Stephanie Hugel, and great grandson Colton Hugel. There will not be a funeral but a Celebration of Life will be held in late spring 2017.