Phages – viruses that infect bacteria – are the most abundant organisms on earth, numbering approximately 1031 (“…that’s 10 with 31 zeros after it”), with about 1023 infections per second on a global scale. With that kind of evolutionary diversity, researchers will never exhaust their opportunities for discovery.

Lafayette students have the unique opportunity to add to the world’s knowledge of phages. Contributions from College Hill have included “Olive,” “GregsThing,” “No2Pencil,” and “SouthernMiss.” 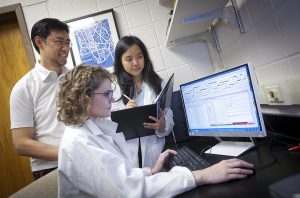 During the first semester wet lab, students isolate a bacteriophage from the environment, purify and amplify the phage, extract its DNA and characterize it by electrophoresis, and take a picture of the phage using electron microscopy. In the second semester dry lab, they annotate the genome of the phages, which are sequenced over the winter break at the Pittsburgh Bacteriophage Institute. It’s a unique undertaking that blends the fields of biology and computer science.

The program is supported by funding from John ’43 and Mary Bolton.

“Teaching the class would not have been possible without the Boltons’ gift,” says Bob Kurt, Kreider Professor and head of biology.  “We spent the bulk of the money purchasing lots of equipment we did not have and supplies needed to run the course.  Items include a gel documentation system, water baths, spectrophotometer, microcentrifuge, etc.”

Nguyen discovered her phage in a soil sample taken outside of Kunkel Hall. She named it Olive for the tiny, round plaques that it created on the agar plates and its resemblance to an olive in its electron microscope photograph. Olive is now part of the online Actinobacteriophage Database

“First-year students at Lafayette have never done anything like this before,” says Laurie Caslake, professor and assistant head of biology, who points out that the scope, time commitment, and project ownership make this an invaluable lab for undergraduates, particularly those who plan to pursue further research.

From the beginning, students have one project with an unknown outcome, unlike more traditional biology labs in which experiments may be repetitive and have known results.

For computer science major Greg Shindel ’19 (Stamford, Conn.), who discovered his phage near Marquis Hall, the first-semester wet lab took him out of his comfort zone. His phage, GregsThing, grew easily and rapidly, nearly quadrupling in size after one day. The SEA-PHAGES lab provided Shindel the perfect opportunity to jump into research early in his college career.

“The most exciting part of studying my phage was it was unique to me and that I was the first one to ever study its growth and characteristics,” he says. “Participating in small-group research as a first-year student allowed me to make personal connections with my professors that have significantly impacted my college experience in terms of available opportunities.”

The time commitment required of the lab is more rigorous than a traditional lab course: Students are scheduled for four hours per week with an optional fifth hour. Biology major Sabatino Ciatti ’19 (Warren, N.J.) calls it the most “hands-on class I have taken at Lafayette so far,” and says the class taught him to be a perfectionist when it comes to research. He found his phage, which he called Tinoioli, outside Markle Hall

“No scientist had isolated Olive before, so I never really knew what to expect from the experiments,” says Nguyen, who is now performing research through the EXCEL Scholars undergraduate research program. “I was always so excited to go into lab and see the results of my tests.”

The excitement that Nguyen, Shindel, and Ciatti felt as they studied and characterized their phages is the goal of the lab, says Caslake. It’s also important for students to understand that biologists cannot effectively work in a vacuum – it takes collaboration with all fields to move science forward.

“To have first-year students feel like they belong here, in biology, in lab, is what we hope and strive for,” she says. “As biologists, we no longer have the luxury of working by ourselves, and we must model that behavior as professors. The data set that is generated, even through sequencing small phages, is enormous and requires computational biologists and computer scientists to help organize and make sense of the data. And after we’ve made sense of the data, the ways we communicate that data in a figure requires an interdisciplinary team of scientists.

SEA-PHAGES is sponsored by the Howard Hughes Medical Institute and based at the lab of Graham Hatfull, Eberly Family Professor of Biotechnology at the University of Pittsburgh.