You can navigate the Xs and Ys, know your cosines from your coefficients, and rattle off theorems like nobody’s business.

But what does it all mean? 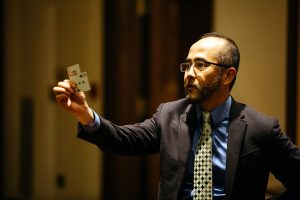 Without meaning, says Francis Su, the Benediktsson-Karwa Professor of Mathematics at Harvey Mudd College, math, numbers, and even mathematical aptitude is little more than a pile of rocks.

“The most important human pursuits arise from a quest for meaning,” Su told a crowd of students in Kirby Hall of Civil Rights. “And pursuing these meaningful things cultivates in us certain virtues.”

Su’s counter-intuitive talk considered how math fits into a liberal arts education. He quoted Henri Poincare, the French mathematician and physicist, who said, “Science is built up of facts, as a house is with stones. But a collection of facts is no more a science than a heap of stones is a house.”

Math seeks to find truth, beauty, and meaning in the universe, Su says. Each problem is a fold in a larger tapestry, and learning occurs not in the solving of problems, but in the struggle for the answers.

“So the next time you’re struggling … don’t get discouraged. Rejoice!” Su said to a burst of laughter. “That’s actually equipping you to persevere. It’s equipping you to solve problems you haven’t even solved yet.”

The struggle is familiar to Ha My Phan Bui ’17 (Hanoi, Viet Nam), a math and economics major.

“I’m doing a thesis,” Bui said moments after Su’s talk. “It’s a yearlong thing. I really struggled through it. … It’s very rewarding when you find something fun in it. It’s worth the struggle.”

“I’ve never made the connection from math to joy and beauty and freedom,” Rabens says. “I never connected the dots.”

“Subconsciously, math plays a part in how I do things,” Neely says. “Now I’m analyzing how I use math in what I do.”