As part of its plan to admit outstanding applicants regardless of their families’ finances, Lafayette College is joining an alliance of nearly six dozen leading colleges and universities that are committed to expanding the number of talented low- and moderate-income students they enroll.

The alliance, called the American Talent Initiative (ATI), is funded by Bloomberg Philanthropies and includes all eight Ivy League schools, four University of California campuses, and 10 Pennsylvania colleges and universities among its 68 members. The alliance was launched in December 2016 with a goal of educating 50,000 additional high-achieving, lower-income students at the 270 colleges and universities with the highest graduation rates by 2025. (See the membership list at the end of this article.) 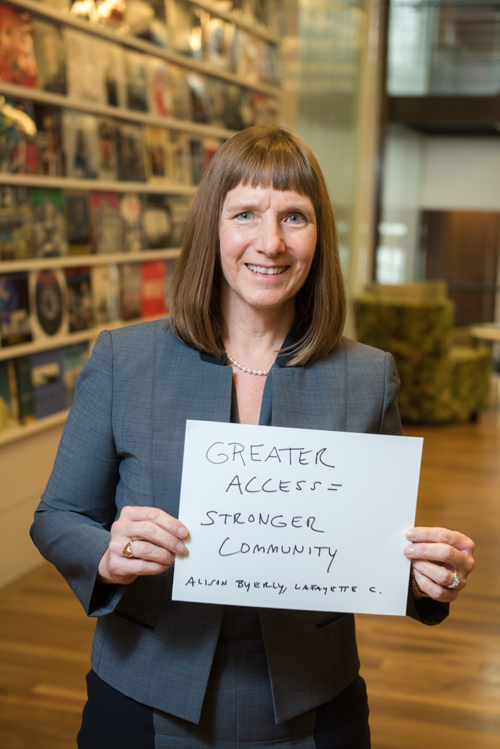 “Living and learning with people from a wide range of backgrounds and experiences is at the heart of the immersive liberal arts education that we provide,” says President Alison Byerly. “Making a Lafayette education more accessible to a broader range of students will not only benefit talented students, it will enrich the entire community.”

To support its affordability initiative, Lafayette is growing its student body by 400 students, to 2,900 total, over the next six to eight years; reallocating some merit scholarships to need-based aid; setting aside 1 percent of any tuition increase to directly fund more financial aid; and making financial aid a special priority in its fund-raising efforts.

Research shows that when high-achieving, lower-income students attend institutions such as those associated with the American Talent Initiative, they graduate at higher rates, and access to those institutions provides them with a much greater chance of attaining leadership positions and opportunity throughout their lives. Yet each year, there are at least 12,500 lower-income high school graduates with outstanding academic credentials who do not enroll at institutions where they have the greatest likelihood of graduating.

“We know that students from a range of backgrounds, including those who are the first generation in their families to attend college, can flourish at Lafayette, and we are committed to seeking out those students,” says Greg MacDonald, vice president for enrollment management.

The College’s partnerships with community-based organizations and charter school networks across the country that educate and support underrepresented students have contributed to record-high applications to Lafayette in five of the last six years, including a doubling of applications from domestic students of color. Applications for financial aid have grown by 77 percent, and the College is exploring additional network partnerships in Texas and California.

“No one college can do this on its own,” says Byerly. “But by coming together in this initiative, America’s highest-performing colleges and universities can transform enough lives to impact our nation’s future.”

Colleges and universities participating in the American Talent Initiative will further the national goal of developing more talent from every American neighborhood by:

Lafayette and other ATI members will share lessons learned as well as institutional data and throughout the coming years will annually publish their aggregate progress toward meeting the national goal of 50,000 additional lower-income students by 2025.

Member institutions of the American Talent Initiative are committing substantial resources to attract, enroll, and graduate students at their individual campuses. This initiative is co-managed by the Aspen Institute’s College Excellence Program and Ithaka S+R  and funded with an initial $1.7 million, multi-year grant from Bloomberg Philanthropies. Through this nonprofit consortium, practices that lead to measurable progress will be studied and shared with member institutions through regular publications.  The first of these publications, “Funding Socioeconomic Diversity at High Performing Colleges and Universities,” was published on the ATI website in February. Grant funding will be used for best-practice research and dissemination, convening college presidents and staff, and data analysis and reporting.

Categorized in: News and Features
Tagged with: Admissions, Financial Aid