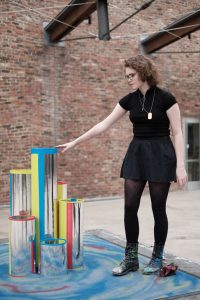 Megan Mauriello ’19 helps install art in the courtyard at the Williams Arts Campus.

At the base of College Hill, in the courtyard that separates the theater of Lafayette’s recently completed William C. Buck Hall from the Williams Visual Arts Building, Megan Mauriello ’19 is thinking about vision.

She and five fellow art students, neuroscience majors, and others are putting together “How We See,” an installation art project sponsored by the local nonprofit Laros Foundation. Led by Julia Buntaine, a New York-based visual artist, the project takes its inspiration from the visual system. So there are giant paper mache rods and cones, and tubes that allow you to look down at the Lehigh River through a web of Christmas lights.

“I’m setting up projectors,” Mauriello says. A reception will open the project at about 4 p.m., when people from the Easton community and Lafayette will attend.

Inside the mammoth brick Williams Visual Arts Building, in one of the open spaces loaded with easels and painted canvasses, Kayla Birde ’17 is spending an hour making neurons. 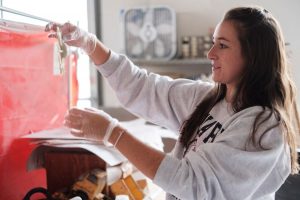 Kayla Birde ’17 works on sculptures of neurons for an art class.

The neuroscience major is here for an hour or two every day making her oblong star shapes out of a mineral-based epoxy. It’s for a sculpture class.

“I’m taking sculpture because I want to be a dentist,” she says. “So I’m working on my manual dexterity.”

Her neurons are mock ups of transmitters in the human brain. She plans to hang 100 of her sculptures (if she manages to make that many. On this day she has 15, the project is due Tuesday, and each neuron takes about two hours to set) in a tree outside Skillman Library.

Keith Hamilton Cobb, an actor and playwright, takes the stage at Colton Chapel. It’s the first event of a two-day symposium, 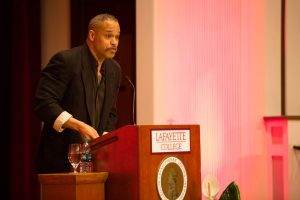 Actor Keith Hamilton Cobb talks to students in Colton Chapel about being a black actor who plays Shakespearean roles.

“Shakespeare, Race, and the Practical Humanities.”

Cobb has played roles in a number of Shakespearean plays, including Othello in his own one-man performance, American Moor.

He speaks of the responsibility he feels for authenticity and how the choices directors and production companies sometimes make can be insulting.

For example, one director decided a pie fight should break out at the end of Othello.

“Why do you insist upon these choices as authentic when the actor you hired—the thing itself … is telling you that they are not authentic at all?” Cobb asks.

Chris Bouquet ’17, an English major, is moved by the speech.

“I’m taking a Shakespeare class,” he says. “We talk a lot more about the text than we do the performative aspects that Shakespeare was writing for. It was really cool to hear that side of it.” 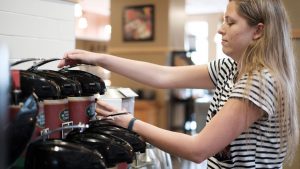 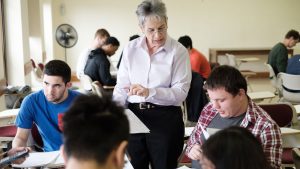 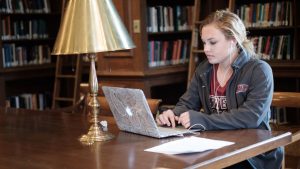