Stacey-Ann Pearson ’15 is the recipient of a prestigious Schwarzman Scholarship for graduate study at a leading university in China known for its scientific research, technological accomplishments, and international partnerships.

Pearson plans to pursue a master’s degree in global affairs with a focus in international studies during a year of learning Mandarin and cultural immersion at Tsinghua University in Beijing. Her ultimate professional goal is to establish a consulting firm that will help business owners in her native country of Jamaica and other Caribbean nations navigate trade courses with one of the world’s emerging global economic superpowers. 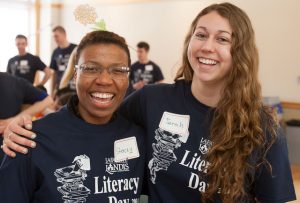 “The Caribbean has really had a tumultuous time with global relationships and development,” says Pearson, one of 127 scholarship winners culled from a field of 2,747 candidates from 119 countries. “China is a great economic power, but there is often a lack of understanding of business practices and culture with their Caribbean partners. I want to help Caribbean companies work with Chinese investors and business leaders and help create a bridge on issues such as labor, money, and culture.”

After graduating, Pearson spent two years working as a risk analyst at Morgan Stanley in New York City before resigning to devote her time to volunteering and preparing for her year in China. Currently, she serves as board director and development chair at Kings County Tennis League, a youth development nonprofit. She’s also a life coach at Ali Forney Homeless Center and a mentor at Big Brothers Big Sisters.

The Schwarzman Scholars are an elite group of young college graduates who bring an entrepreneurial bent to international relations. Pearson will live and study with the other scholars in Beijing, attending lectures, traveling, and developing a better understanding of China. The program—which is in its second year— was inspired by the Rhodes Scholarship, founded in 1902 to promote international understanding and peace.

At Lafayette, Pearson graduated with Sigma Xi honors, earning a civil engineering degree and a minor in economics. She conducted research in renewable energy, cofounded an LGBT safe haven, won several social activism awards, and was a student liaison to the Board of Trustees’ Finance Committee.

Pearson leaves the United States next month to return to Jamaica and then will embark on a Trans-Siberian railroad journey across Europe and Asia with a group of fellow Schwarzman Scholars before they settle in for the yearlong program.