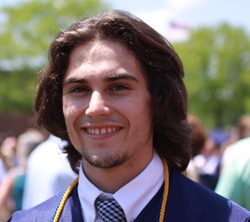 When Joseph Kirkpatrick ’19 asked someone “What’s up?” or “How are you doing?” it wasn’t a gratuitous question. He genuinely wanted to know.

“He would listen and offer his wisdom even if your answer stretched beyond the customary one or two words expected,” says Stephan Geneus ’19. “I’ve never met a person who cared so much about the well-being of others and would do everything in his power to help them.”

As news of his death on Friday, May 19, filtered through the Lafayette campus and social media channels, students remembered Kirkpatrick as a rare and special individual who left an indelible impression on everyone whose life he touched. A recently declared psychology major from Galena, Md., Kirkpatrick, 20, was in Mexico exploring the desert and experiencing its beauty with his best friend when he died in a tragic accident, according to his obituary.

Ashley Carey ’19, also a member of the Outdoors Club, recalls a weekend camping trip to the Gap with Kirkpatrick and others when the Norovirus hit campus last year.  “No one got it,” she says. “We all avoided it.”

The group built a campfire, and Kirkpatrick held court on one of his favorite topics: music. “He introduced me to a lot of new music I wasn’t into,” says Carey.

In fact, he exposed a lot of people to interesting sounds as cohost, along with Slater Stark ’19, of the radio show Late Night, Low Fidelity on College station WJRH.

Abby Williams ’19, who became friends with Kirkpatrick during First-Year Orientation, says he liked listening to “weird, atmospheric, trippy stuff that you can feel in your soul.”

“He loved the radio station more than anything,” she says. “He spent a lot of time listening to music in his room. We’d say, ‘Come out with us,’ and he’d say, ‘But I just found some sick beat.’”

He adopted the DJ name Trappleseed, but Williams doesn’t know why. “He was a goofball,” she says fondly, albeit a brilliant one, who loved engaging friends in philosophical conversations about life.

“One of the most profound things he ever said to me was, ‘We should increase the amplitude of our lives rather than the frequency because then the surface area of our existence will be greater,'” recalls Paige Santelli ’17.

Before declaring a major in psychology, Kirkpatrick had indicated an interest in neuroscience, and Dru Germanoski, professor of geology and environmental geosciences, had been his adviser.  In his 30 years at Lafayette, Germanoski says Kirkpatrick was one of his favorite advisees. “I found Joseph to be one of those very rare individuals who from the moment you meet him, you like immensely,” he says. “The world was truly a better place with him in it.”

That’s because Kirkpatrick excelled at being human, his friends said, and making a practice of showing up in their lives. Geneus says Kirkpatrick never missed one of his Jazz Ensemble concerts and even stuck around afterward while he packed up his instrument and left the stage. “Another trait that made Joe so special was his unconditional selflessness,” Geneus says. “Joe really was the type of man who would split his last dollar with you, and even more, he wouldn’t even tell you that he was low on cash because he wouldn’t want to make you feel worried.”

When Williams learned of her friend’s death she headed to a crystal shop near where she lives in Connecticut. Kirkpatrick liked rocks and crystals, and she picked up one of his favorites, peacock ore, better known as the stone of happiness.

“I always felt like he was on a higher plane than anyone,” she says. “He really liked Buddhism, he meditated a lot, and he did a lot of thinking. He was a really connected person.”

Kirkpatrick is survived by his mother and step-father, Noreen and Joseph Davis; his sisters, Helen, Allison Rose, and Maggie Kirkpatrick; brother, Drake Davis; nephew, Max; aunts and uncles; and friends.

Categorized in: News and Features, Students