Noah Steinberg ’17 traces his fascination with the brain to a seventh-grade biology class, in which a substitute teacher showed a movie demonstrating that bungee-cord jumpers felt capable of processing about twice as much information during their descents than they did standing on the platform seconds before.

It’s a phenomenon known to anyone who’s experienced an automobile crash: Time seems to slow down. Steinberg’s middle-school realization that the brain could “change reality” set him on a journey that now includes a two-year fellowship at the National Institutes of Health. From there, he plans to pursue an M.D/Ph.D. and a likely career as a neurosurgeon. 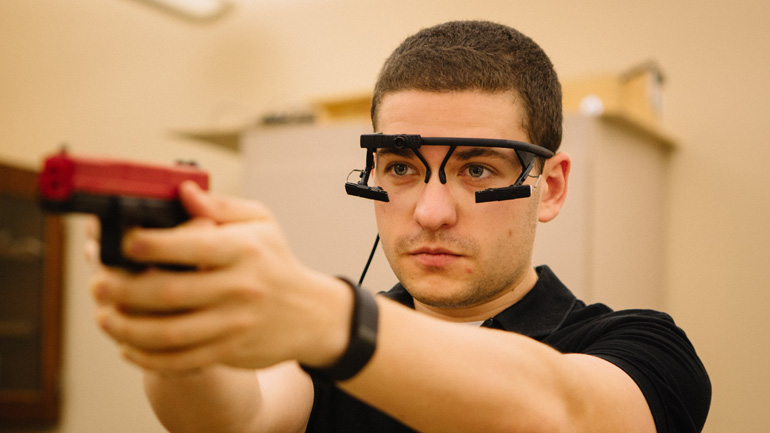 “Lafayette has taught me to love asking questions for which I don’t even know how to begin to find the answers,” Steinberg says. “I’ve become hooked on figuring out how to figure it out.”

It’s that attitude, and his research with professors Luis Schettino in neuroscience and Alex Brown in mechanical engineering, that drew competing fellowship offers from four different labs at NIH. In a nutshell, Steinberg researched whether the brain can detect predictable patterns in complex motion.

His studies used a simulation written by Brown—­an assistant professor who also is a competitive marksman—that mimics a competitive shooting task.  Five steel-plate targets are presented on the five points of a star hanging independently on pendulum arms suspended from a tripod. Remove one plate, and the remaining targets swing and rotate unpredictably.

Students participating in the study visited Schettino’s Oechsle Hall laboratory, where they were handed a camera-equipped headset that tracks eye movements and given a weighted laser pointer in the shape of a pistol. Its appearance is realistic enough that Steinberg made sure the door was closed lest a passerby get the wrong impression. The task: Use the laser gun to hit five targets projected onto the wall. Every time someone shoots off a target, the whole apparatus swings and rotates chaotically. 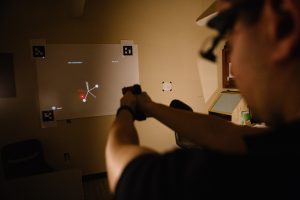 Repeat shooters often developed the ability to shoot out all five targets quickly—Steinberg can do it in fewer than three seconds—which minimizes the challenge of shooting at chaotically moving targets. But when both speed and precision are measures of success, there’s a 50-50 split between which variable participants seem to value more. Steinberg was most interested in how participants progress over time. Do their scores improve? How do they get better? Do their eye movements seem to anticipate seemingly unpredictable movements of the targets? Can the brain “change reality” enough to detect patterns in chaos?

Steinberg trained people to shoot better by shooting more often, even though their shots were spread across a wider area as compared to expert shooters. As expected, there is a tradeoff between accuracy and speed.

He also found that some participants, “ambushers,” wait for targets to move into a particular region of their visual field, while others, “chasers,” track the targets. A possibility, according to Schettino, is that individuals with more eye-hand coordination training, including some athletes, naturally become chasers, while those with less coordination prefer to become ambushers. 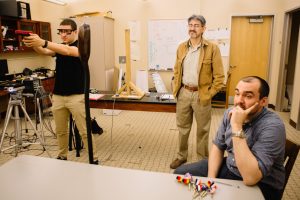 “Importantly, that decision is not made consciously,” says Schettino. “So yes, people improve their shooting, some of them track the targets, but before the motions become too chaotic. Whether that can be interpreted loosely as ‘changing reality’ is difficult to say. Our feeling is that all participants developed strategies to prevent the targets from becoming unpredictable by shooting them as quickly as possible in somewhat stereotyped sequences.”

Scientists have recently described the experience of “quiet eye,” a skill often found in exceptional athletes whose unblinking focus on targets (a steady basketball rim or a soaring clay target) can improve their success rate (making a foul shot or shooting targets with a shotgun). That unblinking focus blocks out perception of anything extraneous to the task and seems to reduce performance anxiety. It also suggests that coordination might be less about physical ability and more about cognitive and visual skills. And it’s quite helpful in fields other than sports. Think, for example, of a neurosurgeon removing a brain tumor.

No one has yet found a connection between “quiet eye” and chaotically moving targets. Although Steinberg wasn’t the first, he found evidence worth further inquiry.

Which, come to think of it, is precisely the point. Steinberg is not driven by finding the answer; he’s focused on figuring out the next question.