Bruce Edwards ’01 advocates for children as a lawyer and new author. Twitter

The defining moment in the life of Bruce Edwards ’01 came while researching a law school paper on racial disparity in America’s criminal justice system.

The soon-to-be attorney was watching “America Beyond the Color Line,” a PBS documentary that focuses on the mass incarceration of African American men in the U.S. What struck him most, he says, was the fate of the millions of children the men left behind to be raised by their mothers, grandparents, or placed in foster care.

So beginning in 2004 with his law degree in hand, Edwards took a job representing inner-city foster children from Baltimore, kids from wrecked homes with dim futures who otherwise would’ve been all but forgotten in a legal system that devotes little attention to them.

“That program really spoke to me,” says Edwards. “I thought, ‘who is going to service them?’ Then I thought, ‘why not me?’ And from that day forward it has remained a pertinent focal point for me.”

More than a decade later Edwards is speaking to others, fathers and children alike, via a book, The 14 Virtues of the Good Father. Self-published through Archway in December, the book shares Edwards’ often difficult, soul-shattering experiences with inner-city youth and their fractured families. More importantly, he offers advice for men on building a foundation to be a good father and developing lasting relationships with their children to help them grow and succeed.

“It’s the one constant I’d see when doing these cases,” he says. “Where are the men, and why are they not engaged with their children?” 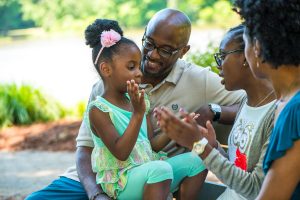 Bruce Edwards with his wife, Rhonda, and their two daughters.

It’s a question Edwards asked of his own father.

Edwards grew up with his older sister, Demesha, in Fort Lauderdale, Fla. Their mother, Dianne, was a telemarketer at Motorola while Bruce Sr. worked at a local dairy company.

But his father wasn’t much of a presence in his son’s life. Instead, he struggled with alcohol, numerous affairs, and other personal demons that are well-documented in the book. And his volatile relationship with Edwards’ mother ended with them ultimately divorcing, leaving Dianne a single mother at a time when the crack epidemic was overwhelming south Florida.

“There was a high rate of incarceration, and a lot of men would disappear,” says Edwards. “My mother is a woman of conviction who wanted better things and gave me discipline, structure, and a fear of God. She said you can make it if you stay faithful.”

Edwards credits his mother’s guiding hand for helping him steer away from trouble. Several times a week she brought him to their local Baptist church, which to this day serves as the foundation for his deep faith.

She also sought out a friend whose husband was a custodian at one of the best schools in the region, St. Thomas Aquinas High School. Knowing she couldn’t afford the tuition, Dianne asked if there was any way he could help her son attend school there.

“She wanted me to go to a nice high school, and the custodian, Charles Brown, was well-liked and respected, and got me interviews,” says Edwards. “They saw my transcripts and that I had straight A’s, so they gave me a scholarship. And Mr. Brown became a father figure to me.”

Edwards maintained top marks through his years at St. Thomas and also played wide receiver and cornerback on the football team while holding a job as the school bookstore manager.

After graduation, with his eye on an Ivy League education, Edwards did a postgraduate year at the prestigious Phillips Exeter Academy in New Hampshire to improve his SAT score. When it came time to choose a college, it was his mentor, Brown, who set the course for Lafayette.

“His coach at St. Thomas came to me and said Lafayette had an academic scholarship for a minority player, and would Bruce be good,” says Brown. “I told the coach he’d be great.”

After researching the school, its academics, and Division I-AA football program, Edwards made the decision to attend Lafayette. He did it without paying a visit to the campus or to Easton, so when he arrived in the summer of 1997, he realized that there might be some social challenges given the relatively small number of minority students.

Football helped buffer some of that awkwardness, and many of the friendships he made with teammates continue to this day. Initially a computer science major, Edwards switched to government and law and made the dean’s list every semester.

While he flourished academically, his football career under head coach Bill Russo languished.  Toward the end of his first year, playing defensive back, he suffered a torn meniscus and underwent knee surgery. At the end of a mediocre sophomore season, still hobbled by the injury, Edwards stepped away from football.

It was a tough decision, but one that ultimately paid off.  “Academically, the foundation I had from my professors was phenomenal and prepared me for the real world. I started dwelling on other things.”

Edwards volunteered with a local community outreach center in Easton and served as a chaperone for the Boys and Girls Club. He also found himself playing the role of campus political advocate after a Lafayette art class project depicting a black family in need of financial aid was posted in a public area.

“The sentiment was that a black family was the face of aid, and if you looked like this you needed financial aid,” says Edwards. “We had a town hall meeting. You could feel the underlying racial tension.”

The protest struck a chord in Edwards, who enjoyed the social activism. So as he entered his senior year in 2000, he decided to apply to law school and was accepted to New England Law in Boston, where he became head of the Black Law Students Association. After getting his law degree in 2005, he traveled to Washington, D.C., with the idea of nabbing a job as a civil rights attorney. But jobs were few, and the leads grew cold. It was a chance meeting with a colleague, who said she had a friend starting up a firm representing foster children, that led Edwards to Baltimore and Mecca’s Place Inc., a child welfare community law firm. There he quickly saw firsthand the horrors suffered by many inner city youth, the result of a host of ills, from squalid living conditions, to sexual and physical abuse, to complete parental neglect resulting from drugs and crime.

“We worked with the largest foster care population in the city of Baltimore,” says Edwards. “I was the only male doing it there the first three years, but I liked it because it put me in the community, and I felt like a crusader out there trying to help kids that were abused and neglected.”

As their legal advocate in the foster system, Edwards represented children being removed from their homes at the behest of the Department of Social Services. Removals are emotional for the children, the parents, and for Edwards, who would be assigned at least four per week, followed by numerous court appearances and frequent contact with the children. It’s tough work and not for the faint of heart. Edwards didn’t just see himself as the children’s legal representative, but as their advocate.

“I’m interacting with families at all times,” says Edwards. “I do field visits, independent investigations. I want to be able to have a tangible experience every day. My best interaction is, do I make a good legal argument? Not every child wants to be moved. But it’s important to address their needs now because maybe they don’t graduate from high school and become part of the prison population.”

According to the U.S. Justice Department, 2.2 million adults were incarcerated in a federal, state, or local prison facility in 2015. Although African Americans and Latinos make up 29 percent of the U.S. population, they account for 57 percent of the prison population. The dearth of adult males has had devastating consequences on the families they leave behind.

“My most difficult clients are teenage girls,” says Edwards. “People mostly speak about fatherlessness and the lack of connection between father and son. No! With girls, their father shapes their overall identity. He’s the first person who gives them a sense of purpose, and many of these teenage girls don’t have it and never had it. A lot of work needs to be done there.”

That disconnect was among the reasons why Edwards decided to write his book. Urged on by his wife, Rhonda, an attorney with the Maryland attorney general’s office (who also wrote the book’s forward), Edwards spent three years putting his thoughts on paper. He then shopped the book to several major publishers, but without an agent, he found it nearly impossible to get anyone’s attention. So he took it to Simon & Schuster’s self-publishing arm, Archway Publishing, and the result is an inspirational and instructive book that relies on Edwards’ deep experience in addressing a wide variety of issues, with a central focus on improving the ability of a man to be a good father.

There are chapters on gaining self-identity and confidence, learning how to be affectionate toward your children, giving them your time, learning the value of discipline and patience, demanding accountability, and offering forgiveness. And throughout each chapter Edwards reaches back to his faith and provides strategically placed Bible scripture. While aimed at black men, the lessons Edwards teaches in The 14 Virtues of the Good Father can be absorbed by any dad willing to understand how fatherlessness affects poverty, teen pregnancy, incarceration, and foster children.

“When I read it I was surprised at how easily he had written it,” says Rhonda. “The way he communicates his thoughts, it seemed to be so natural for him to just get that down on paper, and that was the ‘wow’ factor for me.”

And these are lessons taught by a man who, having been raised by a single parent, not only shares the same experiences as the young people he represents, but practices what he preaches raising his own two daughters, ages 13 and 6.

“I’ve been there, so I’m not a phony to these kids,” says Edwards, who now splits his time between Baltimore and Washington, D.C., at his own firm, Advocates For Justice Inc.

He also serves as a panel member of the Maryland State Advisory Group on Juvenile Justice & Delinquency Prevention and is an executive board member for the Court Appointed Special Advocate of Prince George’s County.

“There are so many social ills,” he says. “I see it every single day, and every day I do a reassessment to see if I touched someone’s life. What I do, this is a calling.”

The 14 Virtues of the Good Father can be ordered at fatherhoodvirtues.com.