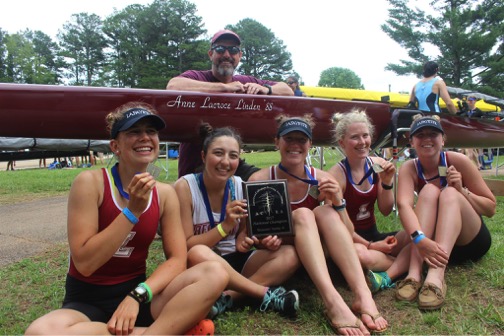 They are the champions: (L-R) Nicole Harry ’19, Julia DeFranco ’17, Carolyn McDonough ’18, Rachel Marbaker ’19, and Emily Smith ’18, led by head coach Rick Kelliher, named the ACRA Women’s Coach of the Year for the Mid-Atlantic Region. The women race the Anne Lacroce Linden ’88 in memory of the coxswain of the women’s lightweight 4 of 1988. The five-year-old boat has won more medals than any other in Lafayette history.

The team—Nicole Harry ’19, Rachel Marbaker ’19, Carolyn McDonough ’18, Emily Smith ’18, and coxswain Julia DeFranco ’17—had scarcely caught their breath since their last national contest. Two weeks earlier, on May 13, the Lafayette women stunned in Philadelphia by taking first place in the Dad Vail, the largest collegiate regatta in North America. Rowing through torrential rain, the fantastic four-plus-one bested 29 teams competing in the varsity open category, including many Division I NCAA powerhouses.

The twin wins capped a spring season in which the Women’s 4+ climbed the medal dock six times—five of them to claim gold.

Not a bad run for a club team barely out of the novice ranks. None of the five had rowed before college.

David versus the Goliaths

From its tents and high-tech gear to the generous support of the Lafayette community, the 45-member, co-ed Crew Club gets to look, train, compete, and win like a varsity team. But technically, it isn’t.

The difference between varsity and club rowing teams is the former’s NCAA membership, says Rick Kelliher, head coach of the Lafayette rowing team. Kelliher has coached both types of programs over his 30-year career.

NCAA varsity rowing teams tend to be bigger—in both physical size and head count—than their club counterparts. They’re financially equipped to recruit. They compete in leagues and have their own championships that exclude club teams. (Likewise, the ACRA championship is a club-teams-only event.)

During the regular regatta season, however, the line between club and varsity blurs. Open events invite all eligible teams to race each other. The competition gets tougher.

“Every year, big Division I rowing programs like Drexel, U-Mass, Northeastern, and Wisconsin get 20 scholarships to award to women rowers,” says Kelliher. “There’s no way our little club team should have beat them. But we did.”

Powered by hard work and heart

The 2017 Women’s 4+ is neither big nor strong. But what the athletes lack in physical stature, they make up for in mental toughness, mutual trust, and a shared sense of purpose.

“What makes this crew so unique is their faith in each other. When a team succeeds at this level, a bond forms between them. It’s rare, but these [five] certainly have it,” says Kelliher.

“This team pushes you to be your best,” says Smith, club president and women’s 4+ stroke. “You’re surrounded by people who love what you love and are as committed as you are.”

Even so, the crew life is not easy. Days start at the crack of dawn. Practices are long and exhausting. And free time is hard to find for student-athletes striving to achieve on both fronts.

But for the disciplined who love a challenge, Lafayette Crew offers the experience of a lifetime—and just maybe, a national championship (or two).