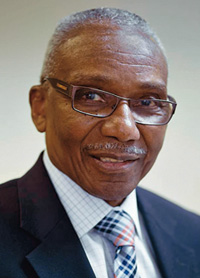 When Eugene DeLoatch ’59 graduated from Lafayette, less than 1 percent of all engineering graduates in the country were black. His desire to change that statistic spurred a long and influential career in which DeLoatch became a champion for minorities in science and technology fields.

In recognition of his decades of work, DeLoatch was recently honored with the Black Engineer of the Year Award by the BEYA STEM selection committee. Thirty professionals in science, engineering, and math from more than 20 U.S. employers have received the award since it was established in 1986. In fact, DeLoatch was among the engineers who created the award with the goal of fostering more interest in engineering among young people.

“After I earned my degrees, I knew there were many other young African Americans who could do the same, and I knew I wanted to help make that happen,” he says.

Over the course of his nearly half-century-long career, DeLoatch became an iconic leader in the engineering field and an advocate for those who may not have otherwise considered an engineering career.

In 2002, he was elected president of the American Society of Engineering Education, becoming the first African American to ever hold that role. As dean of Clarence M. Mitchell Jr. School of Engineering at Morgan State University, DeLoatch earned a reputation for preparing graduate and undergraduate students for their careers. He served as Howard University’s chairman of the department of electrical engineering and dean of the Council of Engineering Deans of Historically Black Colleges and Universities.

Indeed, when DeLoatch retired in 2016, he received a congratulatory note from President Obama recognizing the educator’s accomplishments. “By breaking through barriers and extending possibility, you’ve set a powerful example,” the letter reads. “Through your endeavors to shape a future that reflects our diversity as a nation—one in which all our young people have the chance to pursue their passion in any field of study, including engineering—you’ve helped bring about progress, now and for generations to come.”

DeLoatch acknowledges there is still work to do. Today, just 5 percent of all engineering students are black.

“That’s why we need programs like [the Black Engineer of the Year Award],” DeLoatch says. “The numbers have improved greatly, but engineering education still has a long way to go. All of us need to keep working to make an even greater impact.”