If you want to know Chris Hunt‘s approach to life and work, you need only look at a piece of art hanging in his office. It depicts someone reaching over a wall in an effort to grasp another person’s hand. 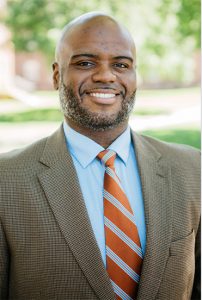 When Hunt, who started as Lafayette’s new dean of equity and inclusion July 1, was an undergrad at West Chester University, a predominantly white institution, his was the hand stretching skyward for support. It was often met by staff and faculty mentors and members of the Black Student Union, who helped pull him up and over challenging times.

“When I was going through something, I knew there was someone who understood my experience and could relate to it,” says Hunt, former associate dean of students and director of intercultural advancement and global inclusion at Moravian College. “The best part was knowing folks were in my corner; there were people who had my best interests at heart.”

Now the figure on the other side of the wall, Hunt hopes to serve as a resource to Lafayette students navigating their college years. This means focusing on groups beyond those that have a natural affinity to his position.

“I want to get to know other parts of campus that wouldn’t necessarily expect a visit from the dean of equity and inclusion,” he says, including sororities and fraternities, sports teams, and clubs.

Creating those connections will help foster an open atmosphere for the exchange of ideas and dialogue on campus as a way of increasing appreciation and awareness of each other’s respective experiences, he says. “I want to make sure everyone has a chance to be heard, and everyone is hearing and understanding each other.”

This isn’t the first time Hunt has worked at the College. In 2003, he served as assistant director of residence life during which time he and his family forged meaningful relationships with many members of the Lafayette community, including Britney Janae McCoy ’05 and Jhennelle Andrade ’06. Hunt says he and his wife were so impressed by the young women that they incorporated their names into those of their daughters, ages 13 and 9.

But before he dives head first into his new job, Hunt plans to take pause and focus on building relationships with stakeholders.

“The biggest thing for me is to listen, especially in this first year,” he says. “I think it would be a mistake to execute goals that are specific without understanding the climate. You need to understand the environment before doing a whole lot of things quickly.”