Valerie Melson ’17 calls the opportunities she received during her stellar college career a combination of  “sheer luck and niceness.” The 22-year-old native of Prince George’s County, Md., is almost self-effacing in describing herself.

Though many would beg to differ, Melson says a “special group of people” in an almost continuous stream over her four years at Lafayette College served as friends, guides, and mentors, allowing her to make incredible academic progress, as well as advance social justice issues on campus.

In recognition, the McDonogh Network awarded her the 2017 Jeffrey Robinson ’80 Leadership Award.

“I’m honored,” Melson says, because such an award, from people with whom she sees and interacts every day, feels more personal and “closer to home.”

“The black students who came here before me paved the way for me to accomplish what I wanted to do,” she says. “It means a lot coming from a community I care about.” 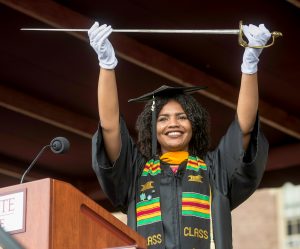 Pepper Prize winner Valerie Melson ’17 presents the sword of the Marquis de Lafayette to the Class of 2017.

The neuroscience graduate also won Lafayette’s 2017 Pepper Prize, the first African American female to do so.

The two awards come together to paint a picture of a young woman who cares deeply about others and is willing to spend time and effort to affect change, especially within marginalized and underserved populations.

But there is even more to Melson.

She once thought she wanted to follow in the footsteps her mother forged as a lawyer, but a molecular biology class at Sidwell Friends School changed that. A lab that allowed her to actively participate in experiments took hold of her, and she has not let go.

Since joining the Lafayette community as a Posse Scholar four years ago, her summers have included a range of research internships that have allowed her to safely say she will pursue a career as a physician who cares enough to know her patients by name. Additionally, her dedication to research, social justice, and an opportunity to work last summer in a Maryland HIV lab revealed her life’s passion: public health and community medicine.

“It is amazing to me how much of science is social justice,” Melson says.

“Science is based on facts, but it is affected by people. And there are no non-biased scientists. Each looks through a certain lens to get the answers they want, so we need a diverse population of researchers looking through many lenses in order to solve the varied aspects of a problem. That way more people can have the best health care.”

So much research years ago was done on white males, she says, but the findings had damaging–sometimes even deadly–consequences for those who were not white males.

“It’s so important to consider race and gender in the course of research. I mean, hormones may be messy, but they make women, women.”

She profoundly believes research will progress more quickly if there is a more diverse group of people at the lab table developing treatment strategies.

Melson’s passion for social justice shines through just as profoundly as her dedication to research and providing the best health care.

In light of ongoing racial tensions on campuses across the nation during the 2017 spring semester, she helped organize a Lafayette-wide conversation, #MORETHANMIZZOU in Farinon Atrium, which was attended by a combined crowd of more than 500 students, faculty members, and administration.

“This is a different place than other campuses,” she says.  “Our administration wants to have these conversations.”

Issues discussed at the forum gave life to the “List of Diversity and Transformation Concerns of Marginalized Students,” a 15-page document taken by students to President Alison Byerly. The list cites topics that range from housing and safe space concerns to economic to faculty to Greek-life issues.

“It is critical to me that Lafayette College continues this way, because I want it always to be as great as it was in that moment, to live up to its potential,” she says.

Melson is living up to hers.