Travis Shoemaker ’18 was confident that his research presentation went over well with the judges when they asked, “Are you a master’s or Ph.D. student?”

The civil engineering major took first place in the student poster contest, open to both undergraduates and graduates, at this year’s Geotechnical Frontiers conference in Orlando, Fla. Held by the Geosynthetic Materials Association and the American Society of Engineers’ Geo-Institute, the conference gathers together academics and professional geotechnical engineers, those who specialize in earth materials in the design and construction process. 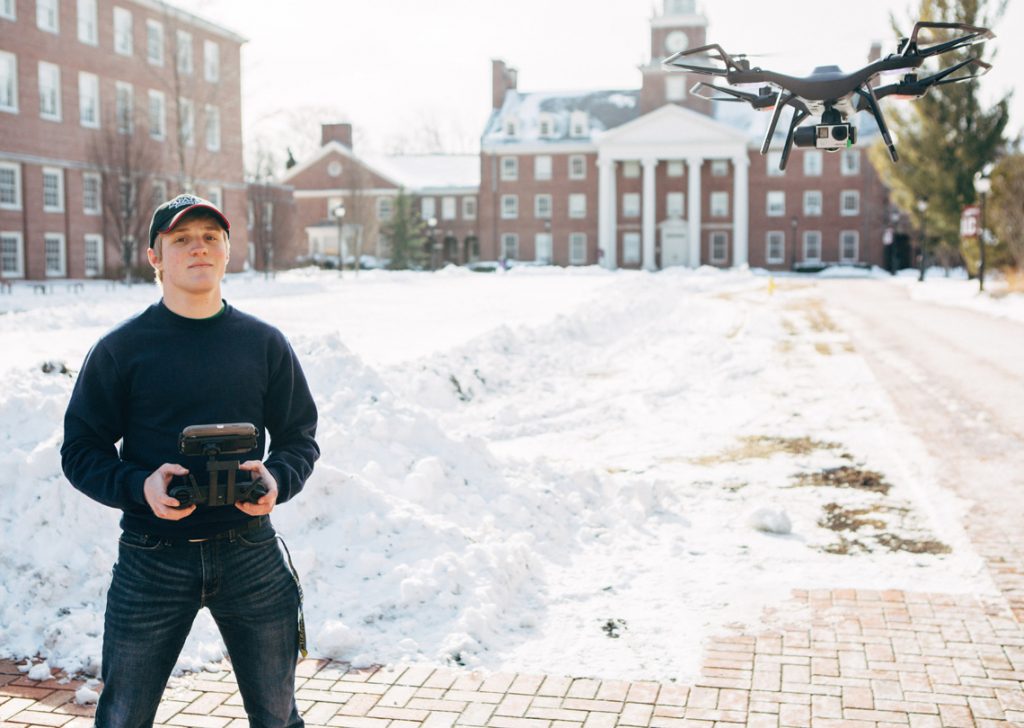 “I was tickled that he got that far,” says mentor Michael McGuire, assistant professor of civil and environmental engineering. “That he won is just amazing.” According to McGuire, this is only the second time in the contest’s seven-year history that an undergraduate has won it.

Shoemaker’s winning presentation covered his research on the use of remote sensing technologies (laser scanning and photogrammetry) to evaluate the integrity of dams. Shoemaker has developed software that evaluates the images generated by these technologies to determine a dam’s structural integrity. Currently, trained dam inspectors walk the dam’s length in order to evaluate its integrity; Shoemaker and McGuire hope to develop this more cost-effective alternative.

Geotechnical Frontiers was only one of several venues where Shoemaker presented his work this past year. He and Michael Bennett ’17 were invited to present at the Delaware Valley Geo-Institute (DVGI) Student Night at Villanova in March, and he was awarded a DVGI scholarship. He presented at the David and Lorraine Freed Undergraduate Research Symposium at Lehigh, where he earned honorable mention. Shoemaker was also chosen to participate in April at the National Conference on Undergraduate Research in Memphis.

The Association of State Dam Safety Officials recently named Shoemaker the recipient of its 2017-18 Senior Undergraduate Scholarship, which includes $7,500 and complimentary registration and travel to ASDSO’s annual conference, scheduled for Sept. 10-14 in San Antonio.

To cap his successes this year, Shoemaker earned a Goldwater Scholarship, which provides up to $7,500 toward college costs. Shoemaker was one of two Lafayette students and one of 13 in Pennsylvania to receive the Goldwater, the premier undergraduate award of its type in the fields of mathematics, science, and engineering.

“Travis is extraordinary,” says McGuire. “In this area of research, it’s so cutting edge that it’s a little different than a traditional mentor-student relationship. In this case, we’re both learning the right tools to apply to the project at the same time. Those tools are new, so it’s great to have someone like Travis who can operate at a level where there isn’t a big hierarchy. There isn’t a big difference in our skill sets.”

Two other groups of Lafayette students earned recognition at Geotechnical Frontiers and a stipend to attend the conference. Winning second place were Kelly Hogan ’18, Laura Strang ’18, Matthew Baldino ’18, and Emily Maj ’18, who created a video called “Candy Crusher,” which explained how to run a triaxial test for a soil’s shear strength by using candy in the place of soil. Winning third place were Jingchen Liu ’18, Ziqi Chen ’18, and James Roberts ’18, who created a video called “Trollgaine,” explaining capillary rise in soils through an advertisement for a product that stops sweat rising in troll hair. Students created the videos as part of McGuire’s course Geotechnical Engineering.

“The majority [of the student teams] are probably not going to ultimately pursue geotechnical engineering,” says McGuire. “It still just gives them a great experience to interact with graduate students, meeting practitioners and academics at other schools. That’s valuable because even in their own specialty, it’s somewhat the same way. This is their first big technical conference experience of any kind.”