Rachel Robertson ’18 was packing for a vacation trip to the Pacific Northwest when she checked her phone.

There was a message from Frankie Illuzzi ’18, who was interning at PBS39 this summer. He’d been attending the station’s “Emmy reveal” party, where the staff learned who’d been nominated for awards from the Mid-Atlantic Chapter of the National Academy of Television Arts and Sciences. 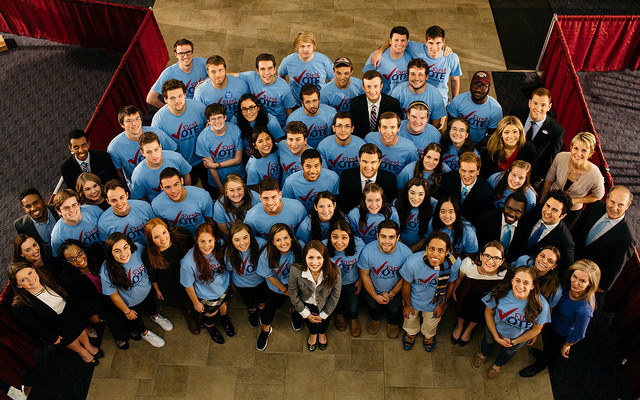 Illuzzi, Robertson, and other Lafayette students were among the nominees.

“I actually tripped over my suitcase, I was so excited,” Robertson says.

This is the fourth time that Lafayette students have produced a live Election Night Broadcast, the last two in partnership with WLVT, the PBS affiliate in the Lehigh Valley.

The two-hour broadcast draws crowds of students to the first floor of Farinon College Center and is the culmination of months of preparation. Students research issues and candidates, write scripts, prepare storyboards, and create video segments on specific issues.

“It’s a tremendous honor,” says Nicole Crain, visiting professor and coordinator of the policy studies program, who along with Mark Crain, Simon Professor of Political Economy and chair of policy studies, serve as executive producers on the project. “It provides external validation of the quality of the collaboration between policy studies, PBS39, and [consultant] Nancy Werteen. It is profoundly satisfying to know that our students have the ability to compete on any level, including against larger programs with more resources. The honor is accorded to a subset of the students participating in the broadcast, but it took all of the students participating to support them in their role.” 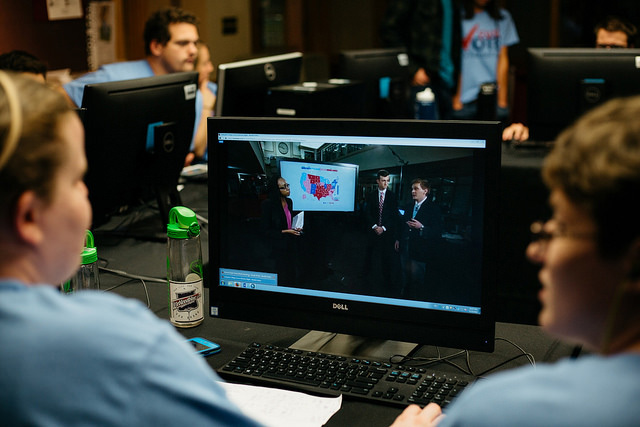 “I couldn’t believe it,” she says. “One of my biggest dreams has been to be an Emmy-nominated producer.”

Nolan edited the script and helped edit the student videos that fed into the production. She also worked as a commentator in the production bullpen, discussing how issues of the day affected her vote.

“I learned so much,” says Nolan, who will begin work in September as a production assistant on the Netflix show “House of Cards.” “Working with such a large group…tested my organizational skills, leadership, problem solving, and delegation skills. The opportunity to learn so much about television firsthand has been an invaluable one to myself and everyone involved.”

This year’s program was designed around the nation’s contentious political discourse.

“The biggest difference was that the atmosphere was so charged,” says Nicole Crain. “The students working on the broadcast came from all sides of the political spectrum. We faculty advisers were aware of the lack of polite discourse on a national level and worked to create an environment where students felt safe to voice their opinions, fears, and uncertainties.”

Robertson was student producer of the broadcast. 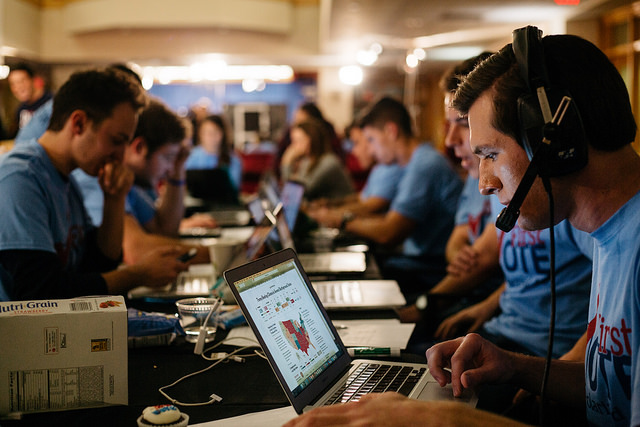 “I couldn’t even begin to list all of the things I learned through this whole process,” she says. “I think the most important thing I learned as the producer was how to manage a team and operation as large as ours was. What made us successful was being able to maximize the strengths of each team member and creating an effective communication system. People and communication, I’ve learned, are the keys to success.”

Robertson isn’t planning a career in front of the camera. Rather, the double major in policy studies and international affairs is heading for law school after graduation.

“I think the most important thing, especially in the current political climate, is how to work successfully in a team of people that has a wide array of political views and personal experiences,” she says. “That such a diverse group of students can work together to create a high-quality product that achieves industry recognition in the way this one has sets an incredible example.”

Ten students are named in the nomination: