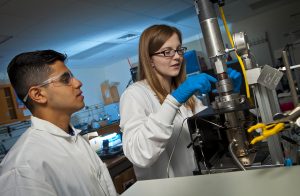 Lafayette’s engineering program moved up to 12th place in the nation among primarily undergraduate programs in the latest ranking by U.S. News & World Report.

“This is a major achievement that reflects all of the great work happening across our engineering programs,” says Scott Hummel, William Jeffers Director of the Engineering Division. “Last year we were ranked 13th. It may not sound like a big jump, but there’s more behind these numbers.”

“So essentially we completed the pass of 10 schools last year,” says Hummel, ticking off some of the quality schools that Lafayette has bested in the past five years as it’s moved from the 30s to 12th place nationally. They include California State Polytechnic University-Pomona, Embry-Riddle Aeronautical University, Kettering University, Valparaiso, The Citadel, Gonzaga, Loyola Marymount, San Jose State, Swarthmore, and Bradley. Among non-military schools, Lafayette ranks eighth in the nation.

The engineering ranking is based solely on the reputation of the schools as reported by engineering deans, including Hummel. They are asked to rate each program they are familiar with on a scale from 1 (marginal) to 5 (distinguished).

“This new listing demonstrates a significant increase in our national reputation among engineering deans,” Hummel says.