Baba Brinkman describes himself as a hip-hop version of the troubadour, a latter-day practitioner of the oral art of the epic poets who uses the same titillating themes that have captivated humankind since ancient times.

A favorite repeat campus guest, the Canadian actor and rap artist opened his recent two-day residency with his rap interpretation of the Epic of Gilgamesh at Markus Dubischar’s classical mythology class. 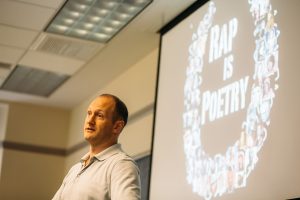 Before the performance, Brinkman explained how his degrees in English and comparative literature evolved into an unshakable love of hip-hop and rap. In the final analysis, he said, great literature, both oral and written from Hellenic poets to Shakespeare, often shares the same thematic repertoire as rap—sex, violence, jealousy, and greed.

Growing up in Vancouver, Brinkman, 38, started listening to and memorizing rap when he was 11. But as a white, middle-class Canadian, he kept his distance from what he considered to be an exclusively African-American art form.

“‘I can be a consumer and not a producer of hip-hop and rap,’” he remembered telling himself.

Then he began noticing that other cultures in Vancouver had their own distinct rap voices—Filipinos, First Nations people, and Sikhs. “I thought ‘yo, you’re not black. How are you getting away with it?’” 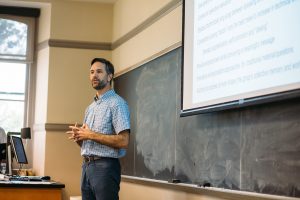 Brinkman said he soon discovered that “people respond to skill rather than ethnicity.”

“Halfway through my English literature degree, I started to hear parallels with Chaucer and rap,” he said. “The Canterbury Tales was really a competition among poets and a commentary on society, calling out injustice, but not purely altruistic.’”

His 2004 “The Rap Canterbury Tales” has warmed modern teenagers to the 14th century classic.

“Writing is a blueprint of an oral event,” he added, noting that oral poetry was the primary means of storytelling from antiquity until the invention of the printing press in the 16th century.

“Bards were the entertainment of the time for generations,” Brinkman said. “No poet could think of reaching eternity through a book.”

Then came Edison’s invention of recorded sound, demonstrated by recording a rhythmic poem, which reached a mass audience without written words.

“It paved the way for the hip-hop culture and rap,” he said.

Now, the bardic tradition of oral storytelling has come back full circle in a society where many no longer have the time or inclination to read poetry.

Brinkman gave the class a taste of “lit-hop,” a lively delivery of his rap adaptation of Gilgamesh, considered the oldest known work of literature from ancient Mesopotamia, originally chiseled on clay tablets in cuneiform.

Sprinkled with pop culture references that he admits are starting to date themselves, only eight years after he completed his rapped Gilgamesh, Brinkman’s adaptation does not shy away from Gilgamesh’s physical attributes, ravenous sexual appetite, and harsh abuses that angered the people of Uruk.

When the gods created Gilgamesh they gave him a perfect body
Like Arnie when his films were still impressive
Like Conan the Barbarian, physical brilliance
Like sculpted steel as flesh
The gods endowed him with strength and courage and fine
Features, like a work of art, perfectly refined
Brad Pitt would have looked like a turd beside him

“Did I mention that sex and violence are enduring themes of our species?” Brinkman said. “It’s as true an adaptation as I could achieve while updating the style.”

Dubischar, who heads the classical civilization program, warmed up his students before Brinkman arrived, describing how modern rap artists share the same lineage with the epic poets of Homer’s day.

Like rap, the underlying metrical structure of ancient epic poetry is simple, allowing the poet to produce line after line after line. “And in the end, you get the Odyssey with 12,000 lines,” he said. “At the same time, the meter’s basic simplicity also allows for great artistic variance that keeps the flow of poetry flexible and stimulating.”

“He doesn’t shy away from big topics, especially in his more recent science rap albums on topics like the evolution of religion or the neuroscience of consciousness,” he said. “He has something worthwhile to say about them in his art, continuing a long tradition of the bard who has the ability and the authority to express or even shape the group’s collective discourse and memory and outlook on life.”

Brinkman noted that “rap is poetry.”

“The oral experience resonates with us because our species has evolved to trade stories to titillate each other,” he said. “Rap is fulfilling that possibility.”

Sponsored by the Andrew W. Mellon Foundation, the Office of the Provost, and the departments of English, theater, foreign languages and literatures, and psychology, Brinkman’s residency also included a rap writing workshop, a performance at the Weiss Theater, and a writing workshop.