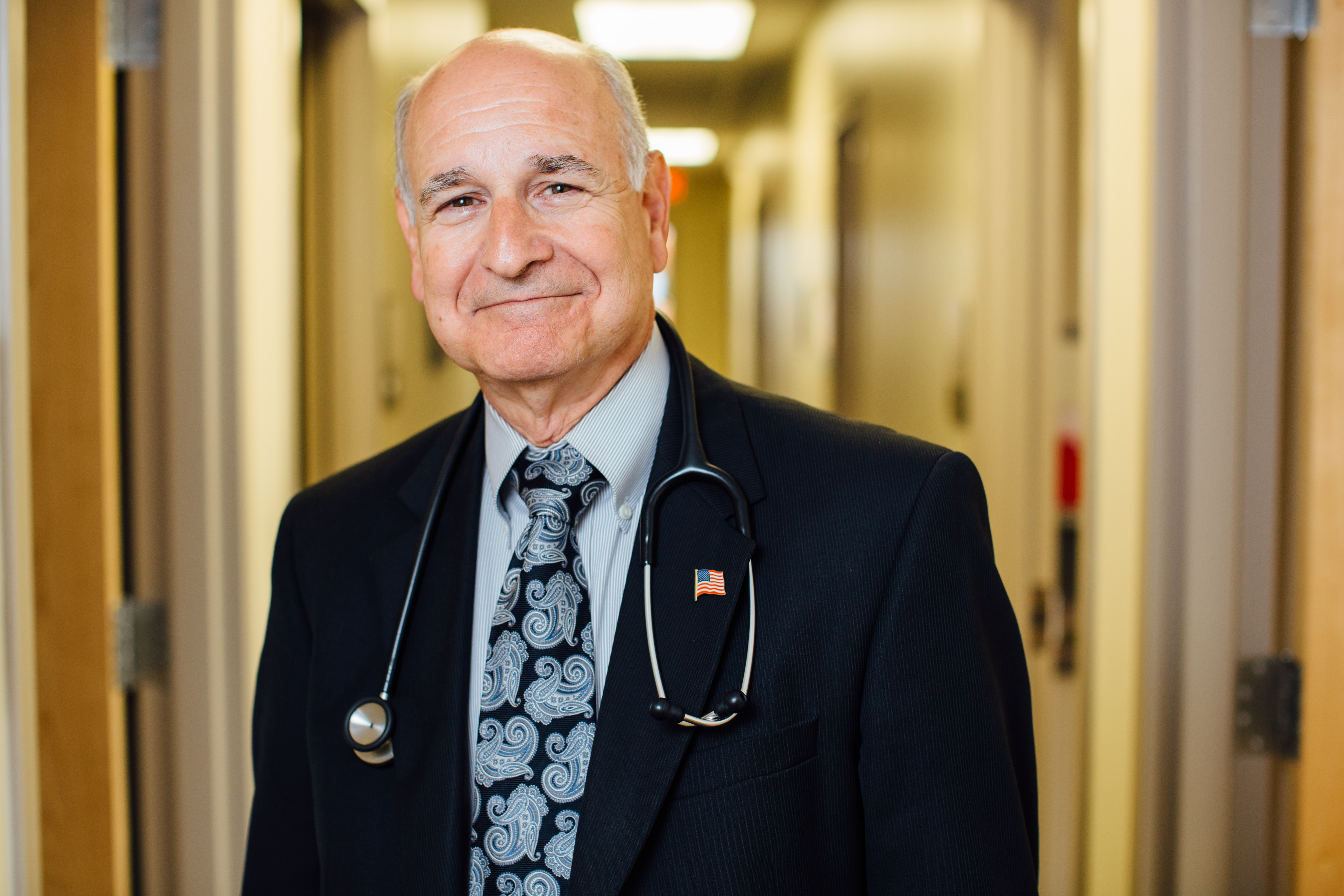 Every three months or so, Dr. Mark Koshar ’70 makes Paul Schlueter his last patient of the day. Uninterrupted by disruptions, the primary-care physician can devote ample time to the medical concerns of the retired English professor and writer, an 84-year-old diabetic he’s been tending for 40 years. The Easton residents can spend the rest of their 90-odd minutes together discussing their passions for politics, religion, literature, family, the state of Lafayette, and the condition of medicine. At the end of the day they’re just friends taking the temperature of life.

“The luxury of time is a beautiful thing, especially when you spend it with a smart, funny, decent man,” says Koshar. “I’ve learned an awful lot from Paul just listening to him. As my father used to say, ‘You never learn anything with your mouth open.’”

Two years ago, Schlueter decided to thank Koshar for five decades of careful, caring care for himself; his wife, June, a retired Lafayette professor of English and former provost, and scores of Lafayette family members, from deans to custodians. The Schlueters established the Mark I. Koshar M.D. ’70 Award, given annually to a graduating senior oriented towards practicing primary-care medicine, hopefully internationally. The first recipient, DaMarcus Ingram ’15, a biochemistry/French major who played defensive back on the football team, is teaching high school chemistry. He hopes to practice medicine at an outpatient clinic or serve as a pediatrician in an underserved area.

The Koshar prize is the couple’s third Lafayette endowment, joining the Schlueter Lecture in the Art and History of the Book and a grant for Skillman Library support staffers named for Neil McElroy, former dean of libraries, and his wife, Marilyn Kann. It’s the second Lafayette award for Koshar, joining the Willis Roberts Hunt Prize he earned as a senior biology major 47 years ago.

“Mark is an exceptional physician and an exceptional human being,” Paul Schlueter says of the internist who has guided him through knee replacements and a circulation problem that nearly cost him a toe. According to June Schlueter, Koshar has all the qualities of a healthy physician: punctuality, passion, compassion, intelligence, wisdom, patience. “We wanted to honor him,” she says, “and the college that produced such a fine doctor and a fine man.”

Koshar learned of the Koshar Award in a letter Paul Schlueter gave him at the end of a check-up—a rare case of a patient providing paperwork. “I was flabbergasted,” says the physician, whose Fleck Consistent Giving Society brick resides near the handicapped ramp to Skillman Library. “It was the nicest thing that anyone has ever done for me, that’s for sure.”

Koshar is speaking in an examining room at his Palmer Township office, waiting on his day off to examine Paul Schlueter after a remarkable recovery from a dangerous gall bladder blockage. The internist is dressed neatly in tasseled black loafers and a pearl-grey suit, an American flag pinned, as always, to a lapel. His manner is similarly soothing. He’s a gracious host and a generous storyteller. His humor is casual, his smile kind.

Koshar grew up in Nutley, N.J., the child of a Better Business Bureau controller. He was 8 years old when his 4-year-old brother, Joseph, died from brain cancer. The trauma made him want to spare others from losing a loved one. His desire to become a doctor was strengthened by his respect for physicians who shepherded his sibling, including a family doctor who made house calls.

Lafayette made Koshar better. He enjoyed playing intramural sports, serving the community with his Kappa Sigma brothers, taking religion classes. He didn’t mind the end of mandatory chapel attendance in 1965, the year before he arrived on College Hill, or the introduction of female students in 1971, the year after he left College Hill. During his sophomore year he met his future wife, Iris, a student at a women’s college in New Jersey, the child of a surgeon and a future librarian. Married two weeks after he graduated from Lafayette, they’re the parents of Ben, a business consultant, and Lynne, a medical attorney.

Koshar relished research projects with Bernard Fried, a now retired professor of biology renowned for student partnerships. His most memorable Fried assignment involved mucking around for a snail parasite found only in a pond in Marlton, N.J. Things were going swimmingly until Koshar rolled off a log, his hip waders filled with water, and he sank to the bottom. “I was pissed off and scared and frozen,” he says. “I learned a great lesson that day: Don’t go harvesting for parasites in January.”

Another mucky situation surfaced during a required junior-year meeting with Lafayette’s medical advisory committee. Faced by a semi-circle of teachers, Koshar was grilled about his choice of a primary-care career. “I said I planned to have a family, and I needed to make a living,” he recalls. “I wanted my life to have some meaning. It seemed to me that to be able to relieve pain and suffering and perhaps give some direction would mean that my work would not just be a job.”

Koshar received a recommendation from committee member Earl Pope, a professor of religion and namesake of Lafayette’s annual Lecture in World Christianity. Koshar thanks the late Pope for giving him spiritual knowledge, Fried for giving him an expertise in parasitology, and other Lafayette leaders for giving him confidence. “I knew what I needed to be successful,” he says. “I knew that in medical school I wouldn’t take a second seat to anyone.”

Koshar attended New Jersey College of Medicine and Dentistry, where a state resident paid $710 for tuition instead of $25,000 charged by better-known medical schools. He used the $75 from his Lafayette biology prize to buy two books. After graduating, he served as an intern and a resident at Jefferson Hospital in Philadelphia, where he studied with the late Dr. Anthony DePalma, a pioneer of hip replacements.

Koshar was at Jefferson when he received a telephone call from Dr. George Joseph, who asked the resident to join his Easton practice. Koshar declined, telling Joseph he planned to teach at Jefferson and join a practice at another hospital. Two days later Joseph made the same offer, this time in the Jefferson doctors’ lounge. This time Koshar agreed to visit Joseph’s office. “He had come all the way from Easton to Philadelphia. How could I say no?”

Koshar joined Joseph’s practice in 1977, the year June and Paul Schlueter settled in Easton after she was hired to teach English at Lafayette. Among his first Lafayette patients were the late Robert Bradford and the late Donald McCluskey ’36, his former English professors.

Koshar worked with Joseph until 2003, when the latter died from brain cancer, the same disease that killed Koshar’s brother Joseph. He remembers his late partner as “a real prince of a man.”

Koshar’s patients praise him royally, too.

For Weiner and Koshar, talking is a form of therapeutic friendship. Over four decades they’ve traded tales of their synagogue, caring for ill parents, changing their fitness regimens to fit their changing bodies. Weiner no longer plays tennis; Koshar no longer runs in the New York City Marathon that he entered seven times. While both men take the same cholesterol pill, only Weiner eats ice cream.

“Mark knows how to treat every aspect of a human being,” says Weiner, whose wife, Sandy, is also a Koshar patient. “He helps you focus on what’s most important, on what to sweat and what not to sweat. He’s non-judgmental about issues like weight and diet; his mission is to help you deal better with issues like weight and diet. He interprets the human condition broadly because he’s part of the human condition.”

Koshar practices hard to keep his practice in tip-top condition. He regularly works from 4:45 a.m. to 7 p.m., refusing to leave until he’s answered every message. He makes house calls to long-time elderly patients who can’t visit him. Paul Schlueter isn’t the only recipient of end-of-day appointments, a privilege both practical and personal.

“I enjoy my patients,” says Koshar. “I enjoy following them from their 60s to their 90s. These are people who lived through World War II, who lived through the Korean War, who have stories to tell, who have a plethora of experience. It’s really pleasurable to be with them.”