As president and CEO of Levi Strauss & Co., Charles “Chip” Bergh ’79 always has the perfect excuse to wear jeans. But he, like many Americans, has been wearing the iconic brand since childhood.

He remembers as a teenager pleading with his mom to drive him to a store in a nearby town so he could get a pair of Levis and be cool. 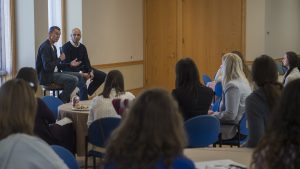 “The people who weren’t naked at Woodstock were wearing Levis,” he says.

Bergh began his career in brand management shortly after graduating by taking a position with Procter & Gamble. His 28-year career with the company included the turnaround of Old Spice, Folgers, and Jif Peanut Butter, and the creation and launch of the Swiffer. Following his retirement from P&G, in 2011 he took the helm of Levi Strauss, one of the world’s leading apparel companies with $5 billion in sales annually. He also is chairman of the board for Hewlett Packard Enterprises.

In his first trip back to campus since 1989, Bergh sat down with students, administrators, and faculty to talk about his career. The event, hosted by Yusuf Dahl, director of the IDEAL Center for Innovation and Entrepreneurship, was sponsored by the Office of Career Services and the IDEAL Center. 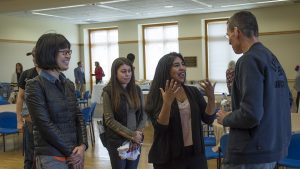 I was a junior at John Jay High School in Cross River, N.Y, when I came to Lafayette College on a beautiful day much like this one. I had gone to Lehigh in the morning—my dad went there. As soon as I stepped foot on campus here, I knew this was it. It felt right. The decision was intuitive. I was an international affairs major and Ilan Peleg, Dana Professor of Government and Law, was my adviser. I had thoughts of living abroad and working for the State Department. I was on an ROTC scholarship, so after my four years here, I had made a commitment to Uncle Sam. While here, I took literature, history, economics—just an array of courses because there was a different approach to what counted for your major. In 1975, the world was changing, and I had an intense curiosity about the world. I wanted to understand everything that was new and different. I got that hunger and thirst to never stop learning here at this institution.

In my career, I have had the benefit of developing and launching new brands. I started at Procter and Gamble as a general manager over a few brands that weren’t very glamorous, like Mr. Clean, Spic and Span, and Comet. At the time, the cleanser Comet had 50 percent of the market share. I watched that erode over a few years to 20 percent as Clorox introduced Soft Scrub. Household surfaces were changing, and we had lost touch with our consumers. They didn’t want or need a harsh cleanser anymore, and lives had changed as dual income households had couples with less time to clean.

We went on a consumer-learning journey. That’s when the Swiffer was born. We used the same technology from our Pampers diapers to develop what would become the Swiffer Wet Jet. The Swiffer dry technology was something we found globally and modified and refined. Now the Swiffer Dry is a $700 million line of business. If companies don’t innovate, they die or become commoditized. We always need to be looking at the next scene and for the next need.

Consider Levi’s. It started 164 years ago at a dry goods store in San Francisco. The gold rush was in full swing, and the prospectors’ pants kept ripping. Each week, they’d return to Levi’s store for more pants. So Levi teams up with Jacob Davis, a tailor, to place rivets in the weak spots on blue denim. They patent the rivets, creating the first blue jean. So Levi’s are born out of innovation. 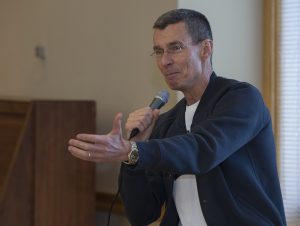 But when innovation stops, brands decline. Some of you may remember Dockers. That brand launched in 1986 just when start-ups are popping up on the West Coast. Those workers are not interested in wearing business suits. Dockers khakis become a billion dollar brand. By the mid 1990’s, Dockers stops innovating and advertising. They became commoditized as every business rushed to put out the cheapest pair of khakis on the shelf. Today Dockers is a $350 million brand. They lost their story and then the consumer. When you lose your mojo, it’s an uphill climb back to the top.

Levi’s slipped in the 1990s as well. In 1996, Levi’s was bigger than Nike. We were a $7 billion dollar brand. In fact, their CEO would study Levi’s and benchmark against us. We dropped to $4.1 billion while Nike is now a $35 billion brand.

When I took over as president and CEO, I did my homework, looking at the annual report and digging into the facts, financial numbers, and data. I also asked consumers about Levi’s. While they had fond memories of us, they hadn’t bought a pair of our jeans in years. We had lost relevance.

Google, a neighbor in our city, also prizes innovation. They work on interesting stuff that may have no use. They had developed a conductive fiber that could be woven into a garment. Seeing we had an innovation center, they called us. Over the last 18 months, the two teams worked to create a connective trucker jacket that links to your phone, and with a tap or swipe of the sleeve, you can answer calls, control music, and anything else you may want. It’s on the market now. We sent the first one off the line to the Smithsonian Institute. 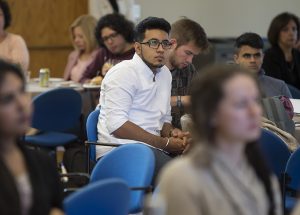 Will it be successful? Not sure it will sell, but conductive clothes are the future. Its success for me is how it changed the culture of our company. Over its development, the jacket failed. One time it caught on fire. The Levi’s team would say this won’t work while the Google team would be excited by a new challenge to solve. The Levi’s team began to catch that same innovative spirit.

Everyone has a Levi’s story. Here’s mine. I was traveling in Germany staying in hostels. Back then, people would wash their clothes by wearing them into the hostel shower, lathering them up, and rinsing them out. You’d hope they would dry overnight so they wouldn’t be too wet when you wore them the next day. I was getting in the shower and set my wallet on the window sill. I washed my clothes and left them out to dry. The next morning, I woke up, remembering my wallet was on the window sill all night. I ran into the bathroom. My wallet was there but my Levi’s were gone.

I knew guys who filled a trunk with Levi’s and Marlboros and bartered their way across Europe and Russia. Levi’s were as good as cash.

These stories are part of the art and science of being successful. To get those stories, you have to understand the consumer. I go right into the consumer’s home. I was in Bangalore, India, in the apartment of a young woman. I asked her to bring out her jeans. She laid them out, and we talked about each pair and when she wears them. When she got to her Levi’s, she had two pairs. The last one she talked about made her wistful. She said that pair didn’t even fit her anymore, but she couldn’t part with them. That pair had too many memories. She then said, “You wear other jeans, but you live in your Levi’s.” That phrase became the slogan for our campaign. You’ve heard “Choosy moms, and now dads, choose Jif” and “The best part of waking up is Folgers in your cup.” “Live in Levi’s” is now ours… I hope it outlives me.

My time in ROTC taught me a lot about responsibility, leadership, and myself. I graduated from Lafayette one weekend, was married the following weekend, and off to Texas for officer’s basic training the next. After five months, I was stationed in Germany for three and a half years. I had a platoon of commissioned and enlisted men, many of whom were Vietnam vets. They may have to salute you and call you sir, but it doesn’t mean they respect, trust, or follow you. I had to earn that. To do so, I rolled up my sleeves and served as a role model. We ran drills, and I did all that they did, filled in for some of their team members, worked in every position. I got my hands dirty. I had gone to jump school prior to basic training. The first person out of a plane with a parachute is the most vulnerable. Maybe you jumped too soon to hit the target. Maybe the enemy will shoot you first. As a leader, you have to be first out the door. And the last person to eat at meals. As a manager, my style is based in honesty and transparent communication; what you see is what you get. It is also important to connect the team’s work to the company’s goals. So you create context that gives them the clear conditions for success. Then it is all about execution. You have to execute.

For more from Bergh, check out this article he referenced on his 10 lessons in leadership: https://fusionleadership.org/10-lessons-leadership-chip-bergh-ceo-levi-strauss-co.