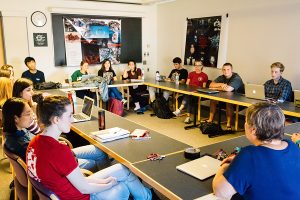 Eighteen first-year students are gathered around four long tables configured into a square. A large screen is lowered, and a squirm-in-your-seat clip from Wes Craven’s 1991 horror-comedy The People Under the Stairs is cued up.

That’s one of two Craven films students will be dissecting today in Fear, a First-Year Seminar taught by Elaine Reynolds, associate professor of biology.

Students spent the first half of the semester exploring the psychology of fear and neurological processes that underlie the emotion. Building upon that foundation of knowledge, Reynolds is now focusing on fear’s role in society, using horror films to show how societal fears are represented in pop culture. 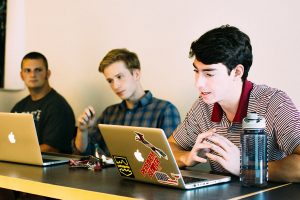 Reynolds presses students on the last aspect—Craven’s social commentary—which she feels is the critical lesson.

“What was the social atmosphere during the time this film was made?” Reynolds asks. “What are the big social issues Craven is commenting on? Think about the social structure of upper-middle-class America during this time.”

Sarah Bender ’21 says that the film is set in a “white-picket-fence neighborhood with zero diversity.” A few other students agree and chime in, offering observations about Craven’s portrayal of segregated communities: They aren’t perfect utopias. Instead, they hide dark secrets.

Reynolds provides additional insight on the period of time and family dynamics of the 1980s. “It’s a commentary on the family, preying on fears of that time period,” she says. “Divorce was becoming more common, and there were more opinions expressed about child rearing. The film has an impact, based on the fears society was facing at that time.”

The conversation carries over to the second presentation of People Under the Stairs, which generated further student discussion about Craven’s views of American social structures and family life.

Reynolds explains the fear of child abduction during mid-to- late 1980s. “This was during the height of ‘milk box kids’—when abducted children were pictured on milk cartons,” she says. “It presented a sense that child abduction by strangers was more common than it actually was. The movie disrupts the sense that America was trying to create safe spaces.”

During the last 15 minutes of class, students have the opportunity to share their personal experiences with fear from their recent field trip to Dorney Park’s Halloween Haunt. Students and Reynolds reflect on the anxiety felt during a slow climb up a roller-coaster hill, stress of navigating narrow and claustrophobic spaces, creepy behaviors of costumed characters, and finally, the frightening prices of amusement park concessions.

Categorized in: News and Features
Tagged with: First-Year Seminar