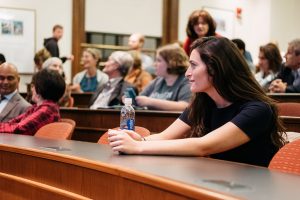 They’ve  joined a capacity audience in the Kirby Hall of Civil Rights auditorium to hear guest speaker Angeline Chiu discuss how ancient Romans marked the Ides of March (March 15) before and after the assassination of Julius Caesar.

Timekeeping was not all that consistent in the ancient world. At the time of Julius Caesar, Romans still followed an ancient calendar until the powerful general and eventual dictator consulted with a Hellenic astronomer to create a new one based on the solar year, which includes a month bearing his name, July. 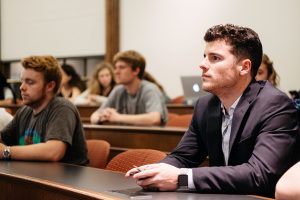 “Cicero didn’t like it either. He joked, ‘Now even the star constellations rise by Caesar’s decree,’” she says.

It also threw into disarray the traditional feast of Anna Perenna, a lesser-known Roman goddess, which occurred on the Ides of March, the New Year’s party of its day. Romans drank with abandon to honor the goddess of renewal, who added a year of life for every cup of wine consumed.

The Ides of March took another turn with Caesar’s assassination on March 15 in 44 B.C., Chiu says. His conspirators and supporters went to great lengths to get public opinion on their side. Brutus even minted a dime-size coin celebrating Caesar’s murder, with images of daggers, a liberty cap (a symbol of the Roman Republic’s freedom), and the inscription EID MAR (Ides of March).

Brutus’ opponent, Octavian, on the other hand, who was Caesar’s adopted son, minted coins propagating the posthumous deification of Julius Caesar, and he tried hard to cast Caesar’s murderers as lawless criminals. Octavian consequently wanted the Ides of March to be remembered as the day of a sacrilegious crime. This perception legitimized his war against Brutus and, eventually, his rise to power as Rome’s first Emperor.

“New imperial politics inserted themselves into the old Roman calendar,” Chiu says, noting that Caesar’s assassination is still commemorated by some in Rome with reenactments on the Ides of March. There’s even a hashtag, #idesofmarch.

Like others attending Chiu’s animated talk, Moran and Bianchi are left spellbound.

“I was struck by how the perception of power can be manipulated by how we record time,” Moran says. “This was an amazing presentation. My roommate was here—he’s not into classics—and he wanted to go to Colton Chapel to hear (Daily Show correspondent) Aasif Mandvi. But he stayed here.”

“It seems that politics can shape so many things, even the calendar and how we observe the conduct of our lives,” Bianchi says. “I never heard of Anna Perenna before, but it sounds like she’s worth a rediscovery.”

Categorized in: News and Features
Tagged with: Classical Civilizations