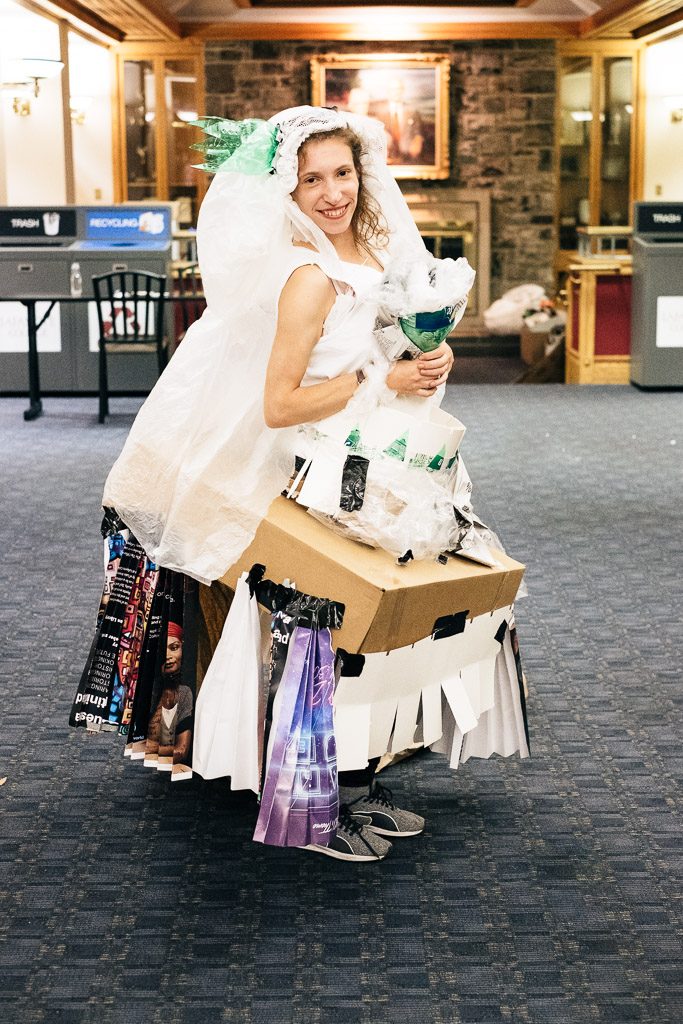 Students strutted their sustainable stuff on the catwalk after crafting costumes from cardboard boxes, sheets of plastic, and soda bottles for Project Runway: Halloween Edition, held recently in the atrium of Farinon College Center to raise awareness about recycling.

Four groups comprised of 11 students total competed to see who could craft the most sustainable and cohesive Halloween costume in about 45 minutes using only recycled materials. The event was sponsored by the College’s ECO-Reps and Kaleidoscope, a social justice group.

At 7:30 p.m., the groups made their fashion debut on the makeshift runway while energetic music thumped, lights flashed, and the crowd of about 50 laughed and applauded.

Samson and costume partner Kira Botelho ’20 made good use of their recyclable stash.

“With the stuff left over, we were like ‘Oh, bangles! Bracelets,’” said Samson.  “We used a lot of [the supplies] and as we were going through them, we found new ways to use stuff.”

The group won a $125 gift card to Mesa Modern Mexican. 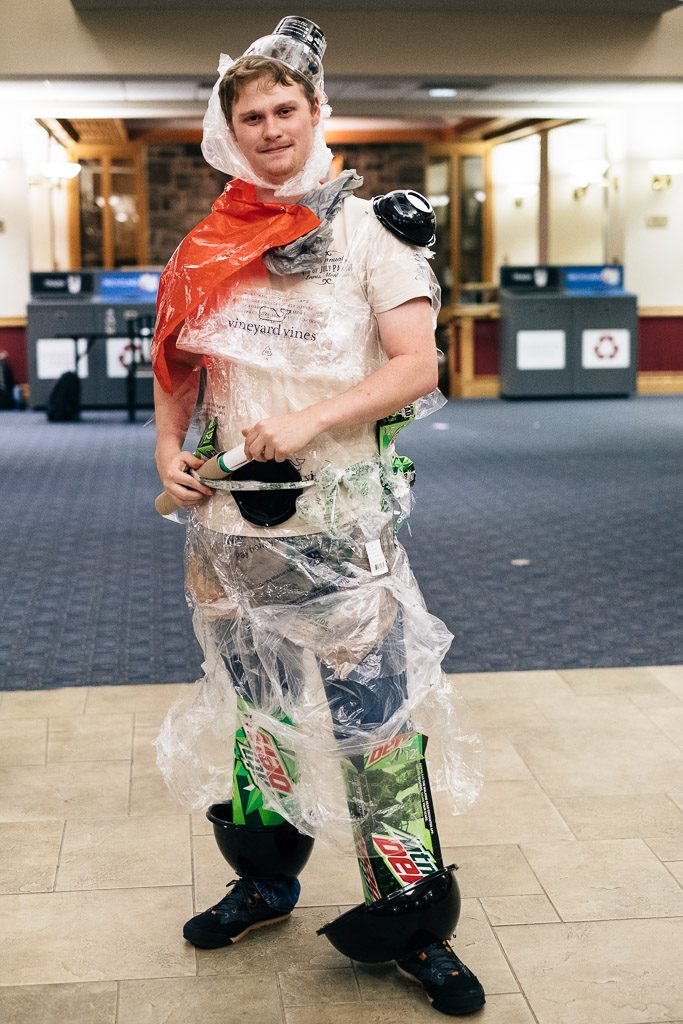 The inspiration for the design stemmed from the thought of returning the containers to where they lived before the food inside them was consumed. The group won a $25 gift card to Cosmic Cup.

The event was organized by Eco-Reps Josh Kline ’19 and Caroline Schaffer ’19.

Eco-Reps are the environmental equivalent of a resident adviser. There are nine to twelve Eco-Reps at the College, each assigned to a different dorm, said Kline, who oversees Gates Hall.

The Eco-Reps have become more of a presence on campus with the November 2016 arrival of Marie Fechik-Kirk, the College’s first director of sustainability. She has been working with the Lafayette community to promote a more environmentally focused campus. This summer, blue recycling bins were placed throughout campus.

“Recycling is the easiest thing someone can do,” she said.

Lafayette has adopted a “streamlined” recycling system, which means all types of recyclable materials, including cardboard, aluminum, newspapers, and glass, can go in the same bin.  It’s a project campus environmental groups have been working on for years.

“I think once the campus hears about ways to make more sustainable choices and contribute to our goals they are receptive to it,” said Fechik-Kirk.

Take this year’s Green Move-In for example. Sponsored by ECO-Reps, the program promotes the recycling of boxes at the start of the school year. This year, five tons of materials were collected and shipped to a recycling center, 2.5 more tons than last year.

Kline hopes events like Project Runway will continue as a way for Lafayette to raise awareness about environmental issues. “As we show more signs of what we’re able to do and influence on campus, we hope to do more projects and initiatives,” he said.

Categorized in: Lectures-Discussions, News and Features, Students
Tagged with: Sustainability