Rexford Ahene has been running a marathon at a sprint pace. Fortunately, the finish line is nearly in sight. 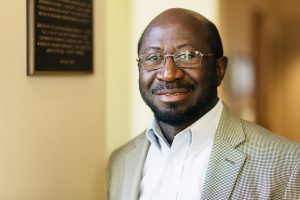 In June, the professor of economics was nominated by the Land Policy Initiative of the African Union and appointed by United Nations Economic Commission for Africa (UNECA) to be chairman of the Scientific Committee responsible for organizing the 2017 Conference on Land Policy in Africa, a major international event in Ethiopia next week.

A conference of this magnitude typically takes about 18 months to plan. Ahene had five months.

It’s a huge undertaking, which is why UNECA selected Ahene for the job. He’s one of the foremost authorities in the world on land-tenure and land-policy reforms in Africa. It’s been the focus of Ahene’s work for more than 30 years, but issues surrounding land grabbing and disrespect for property rights on the continent have only come into the spotlight in the past decade.

“There’s been the equivalent of a global gold rush to acquire large-scale pieces of land in Africa,” says Ahene, an institutional economist who was born in Ghana. “Because a lot of African countries have weak governance and regulatory institutions, foreign and unscrupulous land investors are acquiring thousands of acres and privatizing them. It’s a huge problem because the investors often disregard the impact of such acquisitions on local communities’ livelihoods and the ecological consequences.”

The conference aims to address those issues. More than 4,000 participants will gather in Addis Ababa Nov. 14-17 to share ideas and collaborate on land-policy development.

Implications of the event are considerable. The African Union, UNEC, and several international organizations are depending on ideas and information shared at the conference to address issues of land and social justice, women’s land rights, poverty, and youth unemployment. There is an urgency to protect rural poor and marginalized communities and ensure that ecological and environmental planning and sustainability are prioritized. Lafayette has a seat at this table and is part of the conversation surrounding these critical issues, thanks to Ahene’s ongoing leadership role. 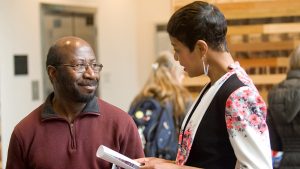 To ensure the conference is inclusive and accessible, scholars from poor countries will have their travel covered. “We want to encourage people who normally don’t have the resources to participate in these conferences to gain exposure and to share their knowledge,” Ahene says.

Shortly after receiving his appointment in late June, Ahene put the call out to collect papers. Within a month, he had received more than 400 submissions. He spent the first few weeks of the fall semester narrowing them down with the help of his 10-member scientific committee. Ultimately, the conference will feature 120 papers in 24 sessions, 35 roundtable discussions, and 20 side events.

This is the second time the conference has been organized by the African Union Commission on Agriculture. It was first held in 2014 in recognition that Africa’s untapped natural resources were in demand—but not always by those who valued Africa’s own needs and future.

Ahene’s contributions as a member of the steering committee in 2014 were so valued that he was asked by UNECA to chair the second iteration of the conference. The tight time frame concerned Ahene, but “they wouldn’t take no for an answer,” he says, with a smile. “I used my teaching and advisory responsibilities at Lafayette and my ongoing land-policy reform responsibilities in several African countries as an excuse, but it didn’t work.” 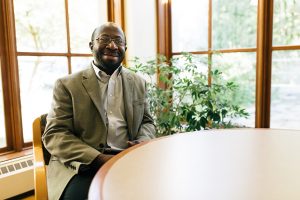 Mackay Rigava, a land-tenure officer at the UN Food Agriculture Organization, knew Ahene was the person for the job. “Professor Ahene has a passion for improving the governance of tenure of land and other natural resources on the African continent and has dedicated his professional life to promoting land policies that support responsible governance tenure,” Rigava says.

Indeed, Ahene has been studying land policy since he was a graduate student at University of Wisconsin in the late 1970s. “When I joined the department, their entire focus was on Latin America, and I bucked the trend by asking ‘what about Africa?’” he says. “I worked with my professors to redefine land-policy reforms in Africa, and my dissertation was used by some key World Bank economists as one more reason to begin to approach land reform in Africa from an African perspective.”

After he joined Lafayette in 1982, he continued to be an influential resource to developing countries in Africa over the next three decades. In advisory roles with the United Nations Food and Agriculture Organization (FAO) and World Bank, Ahene has worked to develop land-reform policies in Tanzania, Uganda, Sierra Leone, Ghana, and Malawi. His role has been to balance  property rights of the community, national economic interests, and opportunities for responsible investors, as well as any land-tenure reforms and other potential sources of conflict. He was one of a small group of scholars invited to South Africa to argue for an end to South Africa’s apartheid land policies prior to the end of the system in the early 1990s.

“To be picked to organize this conference is recognition of the role that I’ve played in land- policy reforms and the leadership I’ve demonstrated in this area for a long time,” he says.

And if he’s asked to lead the conference planning committee again? “I won’t volunteer to do it,” he says. “But if I’m asked—and if I have one-and-a-half years to organize it—I’ll say yes.”