Donating equipment to the community. Cutting down on food waste. Recycling more. Increasing energy-saving measures and conserving water. Sound like the sustainability report at a board meeting?

Nope. It’s the “Food with Integrity” commitment at Chipotle, the Mexican grill that believes burritos can change the world.

If you’ve never peeled back the foil on one of its massive burritos, you are missing the experience of food as a process. Employees mash each avocado, lime and salt the chips, grill all the meats, and dice all the pico de gallo. 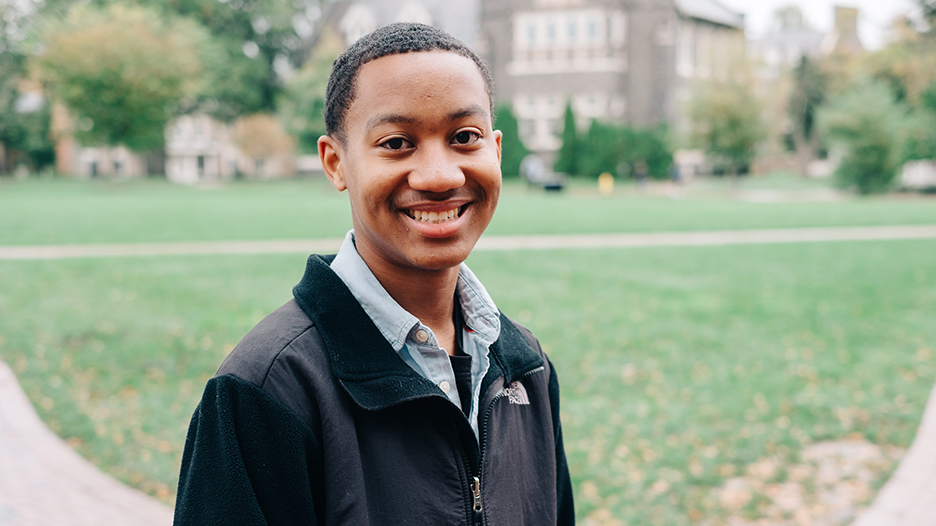 The integrity that combines locally sourced ingredients with traditional kitchen techniques extends to employees as well, like Tyler Cook ’21. Before his senior year in high school, he was named manager of the Chipotle in his West Philadelphia neighborhood.

His co-workers voted him into the role. “They knew I was young, but they rallied around me because I was ready,” he says.

Ready is an understatement.

Cook was entering his senior year at Mastery Charter School and was dual enrolled at Community College of Philadelphia. Taking a full slate of college courses, including biology, psychology, African American history, and Spanish, he dedicated his mornings and early afternoons to school.

Then he was back home to do schoolwork.

Cook was raised in a single-parent family with four siblings—three older brothers and his twin sister. He learned responsibility at a young age, starting to work in retail as a 16-year-old. Making the shift to food service, he saw opportunity for better pay, raises, and advancement.

Six people were on his evening shift, covering the kitchen prep, grill, food line, and cash register. Cook had to master them all. More so, he had to lead.

“I had to ensure operations ran smoothly, maintain food safety, keep up the appearance of the restaurant, coordinate catering, and handle customer service,” he says.

How did that go when all the employees were older?

“It was overwhelming at first as I wanted to be respectful of my elders,” he says. “Over time, I figured out what the title meant and used the authority and trust my co-workers gave me.”

He used that same trust when it came time to select a college. He had a full-ride offer at a school in Boston, but he knew it wasn’t the right fit.

“Deep down, I knew Lafayette was where I belonged,” he says. “I kept picturing this campus and loved the idea of being closer to family.”

He got his first glimpse of Lafayette during a weekend trip as part of Our Beloved Community, a symposium named after Martin Luther King Jr.’s vision for a society that embraces its members in all of their differences. The event draws prospective students from around the world to engage in dialogue about social justice topics and active citizenship.

“I got to really see the community here at Lafayette over that weekend,” he says. “I met and talked with so many positive people.”

Cook was so convinced that Lafayette was his best choice, he applied early decision. He received a generous need-based financial aid package. Now he is on the pre-med track, planning to major in psychology.

“I’ve had three medical internships at hospitals and medical schools in Philadelphia, from same-day surgery centers to clinical practices,” he says. “I am leaning toward orthopedic surgery.”

Running a kitchen during peak hours may provide some transferable skills to running an operating room: prepping for the shift, covering breaks, delivering results, and keeping customers satisfied.

“If one of those things was not going well at the restaurant, I had to learn to juggle,” he says.

Sure, the 30-day training course helped, but keeping several balls in the air is Cook’s specialty. As a worker, manager, and student, it’s easy, and cheesy, to see that he’s nacho average guy.