Are these story headlines from National Public Radio? Topics of conversation at an academic dinner party? Or seminars at a national conference? 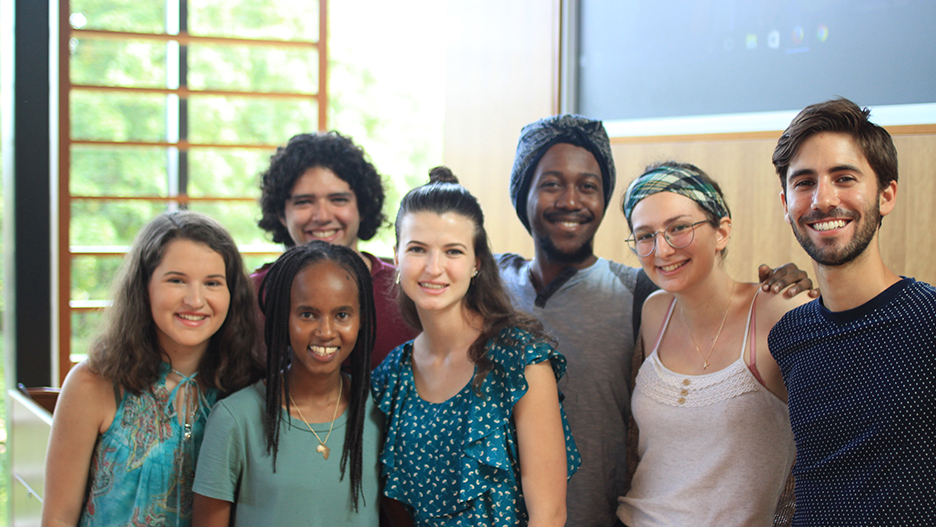 While all may be true, if you answered the latter, you’re right.

The group of students began an arduous six-week journey as undergraduate interns guided by former research and instruction librarian Sarah Morris. The program was initiated by Skillman Library with funding from an Andrew W. Mellon Foundation grant, and Morris led it for its first two years.

Students are tasked to build digital humanities projects and prototypes of their own design. Digital humanities is a collective process, not solitary. Plural, not singular. Dynamic, not static.

The methodology pushes students to collaborate, learn and use many tools, and live beyond words on paper. And to move a project from conception to completion in six weeks means focus and execution are two sides of the same coin.

Tedi Beemer ’20, a double major in government & law and philosophy with a minor in Russian language, says the process was rife with surprises and challenges.

“It moved with velocity,” she says. “We started slowly with two weeks to discuss articles on digital humanities and learn the foundation and structure for projects. Then the gears changed as we began to collaborate, refine, and create.”

John Rodriguez ’19, a double major in English and art, enjoyed the process despite its rapid acceleration. “Talking and debating was helpful for me to establish the themes, structure, and talking points for my project and then translate it into digital tools, like Scalar and WiX,” he says.

Scalar is a free, open-source platform that many digital humanities scholars use because of its ease in assembling various types of media with writing. Like Scalar, WiX is a free website builder that requires no coding experience.

“I wanted to make a project expand through an online tool,” Rodriguez says. “To translate a paper into an online project.”

But determining and narrowing a project can often be harder than learning the online tools to translate it.

“I had looked at the EXCEL Scholars program, but I wanted a topic I was passionate about and where I had more free rein,” says Beemer. “But the focus of my research took shape more slowly.”

She wanted to explore reality love television, joking that meant watching The Bachelor all summer. As she looked at research, she found many articles discussing race, culture, class, gender, and sex, but few that talked about ability.

She had remembered a female contestant on Bachelor in Paradise who had a severed arm. She then stumbled upon a British show entitled The Undateables where all of the contestants were differently abled.

“My questions truly began to form around why visibility is important to underrepresented groups, how depiction of those groups can help and hurt, and how common it is to use able-bodied actors to represent these groups,” she says.

Her investigation only prompted more questions, the discovery of a lack of data, and the near-universal tone in the shows that patronizes, delegitimizes, and marginalizes this group.

Rodriguez’s project drew from his passion for music. Kendrick Lamar’s album To Pimp a Butterfly earned critical praise, a shout-out from then-President Barak Obama, and a Grammy. But many rap albums, whether hardcore, hip-hop, or gangster rap, are dismissed by the dominant culture for unwelcome themes like violence, misogyny, sex, and drugs.

“People often miss that an album like this is a lens that focuses on real experiences in our country,” he says. “The mental, physical, and cultural conditions that surround the African American community can be ignored.”

That’s why Rodriguez wanted to tease out how the messages in a complex work of “oral literature” relate to social injustice experienced today.

“I found two recurring themes in the album,” he says. “One was institutional racism and another was self-esteem.”

Both Beemer and Rodriguez have written many lengthy papers, but with their narrowed topics and clear discoveries, they now had to translate the ideas into digital tools.

On a bright sunny afternoon in September, the Gendebien Room in Skillman Library is buzzing. Students, library staff, and faculty fill lunch plates and sit to listen as each scholar presents his or her project, discoveries, and future research plans.

The presenters appear calm, having already presented their work-in-progress over the summer to digital humanities scholars at Bryn Mawr College. Some presenters are using today as preparation for the conference at Bucknell.

While Rodriguez is still in class, others presenters are ready to go. Maria Ahmed ’20 begins. Bright maps with pins and colored arrows track the secondary migration of Somali immigrants. Her Wix-created site shows images of the secondary cities while she talks of the factors that inspired the moves: economics, community, and safety.

Idil Tanrisever ’19 arrows through images of women in advertisements following World War II and from today. She built a digital book and gallery. Tableau, a data visualization program, helped her to comprehend and compare the roles, occupations, and representations of women in the ads.

Aerial shots of neighborhoods in Bogota, Columbia, are shaded according to how buildings are ranked by appearance. This stratification, says Daniel Gonzalez ’19, determines how much a resident might pay for utilities. He used Story Maps to help illustrate how culture and policy impact the classification of buildings, income, and people.

Ben Minerva ’18 pulls up another Wix site to show evidence and maps to explain how Jews were forced from Christian countries and welcomed in Islamic countries in the 15th century. He discusses how it is a narrative absent from public discourse today.

Absence was the theme in Camilla Samuelsson’s ’20 project. The Sami people, indigenous to Scandinavia, are lost in government policies that leave them untracked. Her image-rich Scalar site shows a people and way of life that are nearly gone.

Jovante Anderson ’19 reclaimed a space for Jamaican women: the dancehall. The illustrations, photos, and videos sway viewers to see that the dance moves transform a denigrating space to a liberating venue for women.

Beemer’s project is, as she describes it, “pretty.” The faint watercolors coupled with images from television shows do as she hoped: lift it away from the standard ink and paper.

Is she sold on the idea? Not fully. “I’m more traditional than my other scholars,” she says. “I like the links and pictures and embedded videos, but the substance still comes from my writing.”

Rodriguez is more impressed. “Without this project, I would have missed out on how to use these tools, go deeply into library resources, and collaborate with fellow students,” he says. “We breathe the same air and share the same core values, so it is valuable to create projects like these that help me learn about myself and the community around me.”

Such learning is lifted off the page as their scholarship is digitized.