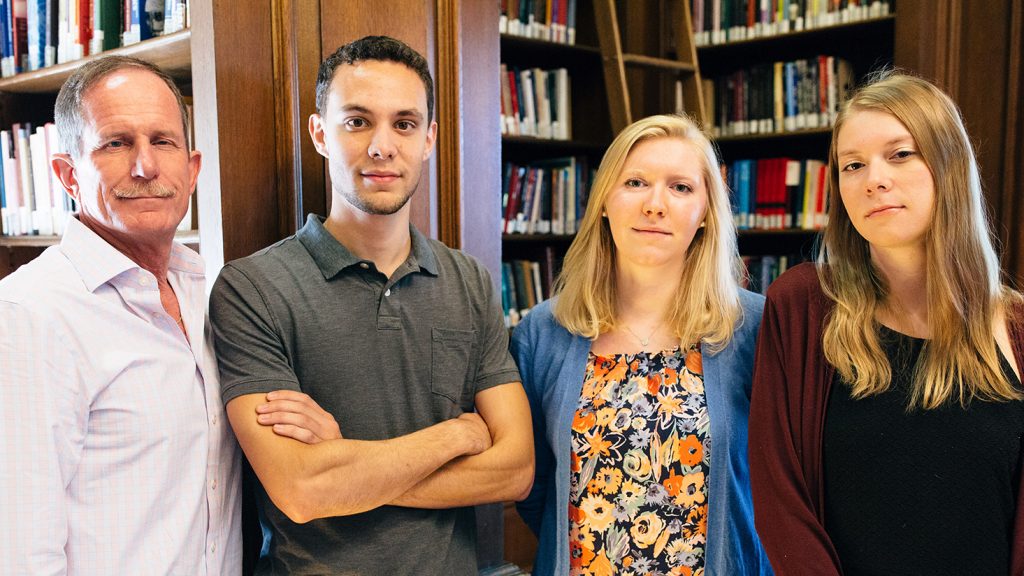 On conference tables in municipal offices throughout Pennsylvania at some point in 2017 is an outline for a Pollutant Reduction Plan. Townships have to earn permits based on their ability to monitor and manage pollution sources in their stormwater sewer systems.

Kari Schultheis ’19 stands in a room, binders lining the wall, in Lower Macungie Township’s offices. Each binder is filled with blueprints. Some prints, for a house, may be a single page, but larger projects, like industrial parks, fill multiple pages.

The civil engineering major will spend eight weeks of her summer looking at township blueprints to identify the 5,000 sewer inlets and outlets, many of which are underground.

Connecting these township interns is David Woglom, associate director of public service at Meyner Center for State and Local Government. Having served as a municipal manager for 27 years, Woglom has built relationships with regional leaders across seven counties near the College, and for two years, he has worked to match talented students to real-world projects for a summer internship program.

“I contact municipal managers in the area and down into suburban Philadelphia and solicit their interest in interns,” he says. “I often speak with managers, help draw up job descriptions, and outline time frame, hours needed, and compensation.”

Woglom then shepherds students through a process, posting the roles in career services and departments like engineering, interviewing candidates, and presenting the best to townships.

As a rising sophomore, Schneck was hoping for a summer internship but didn’t expect it to pan out. “I was prepared to work in the warehouse at Dorney Park again, loading up boxes to be delivered to various parts of the park,” he says. “I was excited to have an opportunity to use my skills and work on a project like storm sewer pollution.”

Woglom adds, “The township sensed that Calvin had an aptitude for the work and offered him full-time hours.”

Schneck hit the road to count and map drains. He presented maps at township meetings and worked with the township’s contracted civil engineering firm.

“It was interesting to see what goes on behind a big engineering project like this one,” Schneck says. “I hope to use this internship to help me stand out and secure a mechanical engineering internship next summer.”

Two of Woglom’s hopes for students: Make a meaningful contribution to a project and build a resume with tangible experiences.

Swanson did. Bethlehem Township is approaching build-out with its developable land, so redevelopment and vacancy planning are crucial. She picked up where another Lafayette intern left off last summer. Calling realtors about warehouse listings, tracking new inventory of vacant spaces, and searching online for what had been leased or sold, Swanson was committed to the bigger picture.

“It wasn’t very glitzy work, but the larger implications matter,” she says. “The trend is important—what the markets are doing and how to manage available space. Smart growth planning based on those trends is glitzy.”

Swanson also liked seeing how government operates. “I sat in most meetings and saw how government works,” she says. “While not many residents would attend, the few who did posed questions and brought up concerns, like low tree branches. It would be easy to dismiss these residents as complainers, but they are truly invested in their township, trying to understand decisions and improve their community. Having them in the meeting alongside officials who make decisions helped me to see things differently.”

This is another of Woglom’s goals: Get experience with local government. “I want them to go to a meeting and see what it’s like to operate a township,” he says. “To see the underbelly, get a sense of people and projects in the building that are unrelated to their internships.”

After a few lunches with co-workers, Schultheis learned that more work goes into keeping the basics running than citizens may realize. Still, she kept her nose to the grindstone.

“I formed relationships with the independent civil engineering firm the township consults with,” she says. “I balanced blueprints with fieldwork, had a crash course in geographic information system mapping, and got to see the project from start to completion.”

Schultheis was in her element as she tracked pipe types and sizes and then digitized the information.

“I got a strong sense of what working in my industry was like,” she says. “There was a lot of collaboration throughout the project. I learned the regulations, used the tools, and lived the lessons I learned in class.”

Sure, they all can be haunted by the work as they drive over and past things others might not notice, like storm drains, vacant offices, and places to capture runoff. Sure, they heard town workers patiently explain rules and regulations to some irrational citizens. Sure, they sat in long and often uneventful municipal meetings.

But their experiences are not unlike that of the Meyner Center’s namesake. Before he was New Jersey governor or a lawyer of reputation, he began as a clerk at a small law firm.  What did he gain at that time? Meyner said “a lot of experience but little money.” Some things never change, but those things are usually exactly what you need.