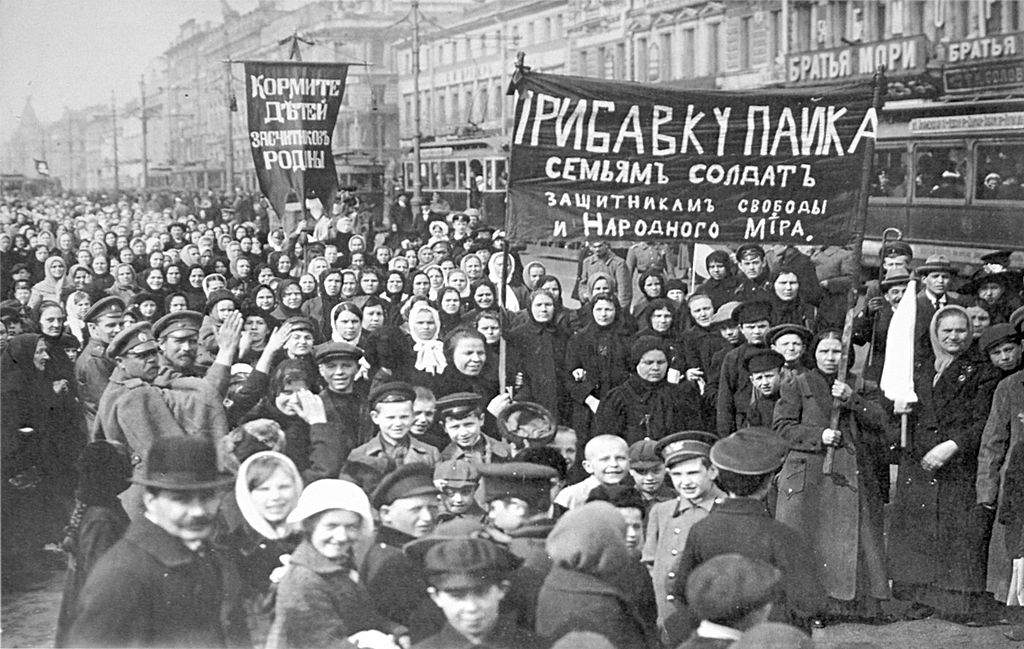 Nov. 7 marked the 100th anniversary of the Russian Revolution. And Lafayette did something the Kremlin did not: We commemorated it.

Sanborn and Ceballos led a panel of experts, which included Christopher Lee, associate professor of history, Michael Feola, assistant professor of government and law, Jesse Sharkey, vice president of the Chicago Teachers Union, and Jennifer Wilson, postdoctoral fellow in Russian and East European studies at University of Pennsylvania, to discuss the historic event and its implications on modern-day activism.

Missed the talk? No worries; we went. Here’s our takeaway.

In 1917, two major revolutions occurred. The first (on March 8) was led by urban women opposed to World War I and the government that waged it. Within a matter of days, Tsar Nicholas II was forced to abdicate. The second (on Nov. 7) was led by Vladimir Lenin and his Bolshevik Party. This revolution gave rise to the Union of Soviet Socialist Republics (USSR), a Marxist state that promised social equality at the end of the revolutionary process. But in a tragic twist, the Soviet regime ultimately gave way to violent and authoritarian rule.

Why is it so significant?

Wait, why is the Nov. 7 revolt called the October Revolution?

Yes, let’s clarify: The October Revolution, also known as Red October, occurred on Oct. 25, 1917, because the Russian Empire and its tsars followed Eastern Orthodox Christianity and its calendar. The Julian calendar was out of step with the Gregorian calendar, which was used in Europe. When Lenin took power, he adopted the Gregorian calendar, and so Oct. 25 jumped to Nov. 7.

There seem to be lots of social protests these days (the Women’s March, Standing Rock, Black Lives Matter). Could a Russian Revolution happen again—here?

Sharkey thinks so: “To me, a fundamental component to a revolution is a tyrant, and the tyrant is unresponsive to what people in society need,” he says. “This idea of a tyrant with authority—it’s not that big of a stretch to me to imagine our government going in that direction in the face of some crisis, perhaps a terrorist attack or climate change. Sea levels are going up. What will happen 100 years from now when New York City floods and if the people in the White House don’t believe in climate change or environmentalism? I think society might be faced with a situation where they might need to revolt.”

Lee disagrees: “I think it’s highly unlikely in terms of some kind of Bolshevik-style revolution, where you’re taking on this massive project in a huge country. I think that is something we will never see again,” he says. “I think that nation-state matters less and that power is organized differently in the world today. It’s organized around cartels of nations and corporations, like the G8 and the Big Five technology companies, and I think that makes it harder to generate activism. I don’t think we will see a revolution of that nature again.”

Sanborn thinks that large social revolutions are more likely in times of acute crisis: “I think that for a revolution of that nature to work, you’d need to recreate World War I, because that hurt the country’s economy and led to food shortages, which led to the revolution,” he says. “I hope that we won’t see another World War, but I think that’s part of the tension needed for that level of ambitious, sustained revolt.”

Is it all doom and gloom?

No, Lee offers some optimism: “Something that has resonated with younger people in the United States is the idea of autonomist Marxism that opposes class inequality but doesn’t require a fixed kind of organization that you had under Lenin,” he says. “Even if a Bolshevik-style revolution never happens again, there are still other options to mobilize and protest against social-class inequality and fight for human rights, and I personally find that very important and necessary.”

Can modern-day activists learn anything from Lenin?

“If you follow the successful model of the Russian Revolution, a grassroots effort is not a good principle,” he says. “Occupy Wall Street, I think, is an example of a failure. It was a grass-roots movement, led from the ground, a lot of activism, and a lot of energy. But I don’t see any long-term outcomes from that. I think that if Lenin came back from the grave, he’d say, ‘I told you so.’ Right? He would say that that kind of movement doesn’t work, that the only way to build a revolution is through order, hierarchy, and discipline. The October Revolution is the victory by this disciplined party in the midst of chaos where grass-roots efforts had not successfully produced a victory. That Bolshevik model, however, proves highly problematic once power is seized, as these hierarchical, disciplined parties tend to build authoritarian and frequently violent states. Contemporary activists need to be aware of these twin lessons of the Russian Revolution.”

Lee adds: “I think political movements today should focus on making incremental changes rather than on producing a revolution.”

So, how does all of this go over in Russia today?

People are divided, Ceballos says. “For some people, the revolution is synonymous with victory and the overthrowing of an unjust leader,” she says. “But for others, it’s the event that leads to the collapse of the Soviet Union.”

And Sanborn says that Russia is downplaying the revolution, especially in the Kremlin. “Revolutions aren’t great for people in power,” he says. “You don’t want to stimulate rebellious ideas. There is an element of danger surrounding revolutions. And there is the Stalin question: Why did this revolution lead to Stalin, and did it need to lead to Stalin? Did it need to end with terror in Russia? When you think about the need for change in political society, and when you talk about a revolution, yes, it can change the culture and the way of thinking, and that’s super important, but it’s especially important to be aware that you are replacing leaders and state institutions.”