Justine Perrotti '19 and Prof. Dave Sunderlin are unlocking the secret past of petrified wood. Twitter

The razor-thin nearly transparent slide that’s under Justine Perrotti’s microscope lens used to be a hunk of rock. That used to be a towering tree. That used to live 220 million years ago—when the first dinosaurs roamed the Earth. 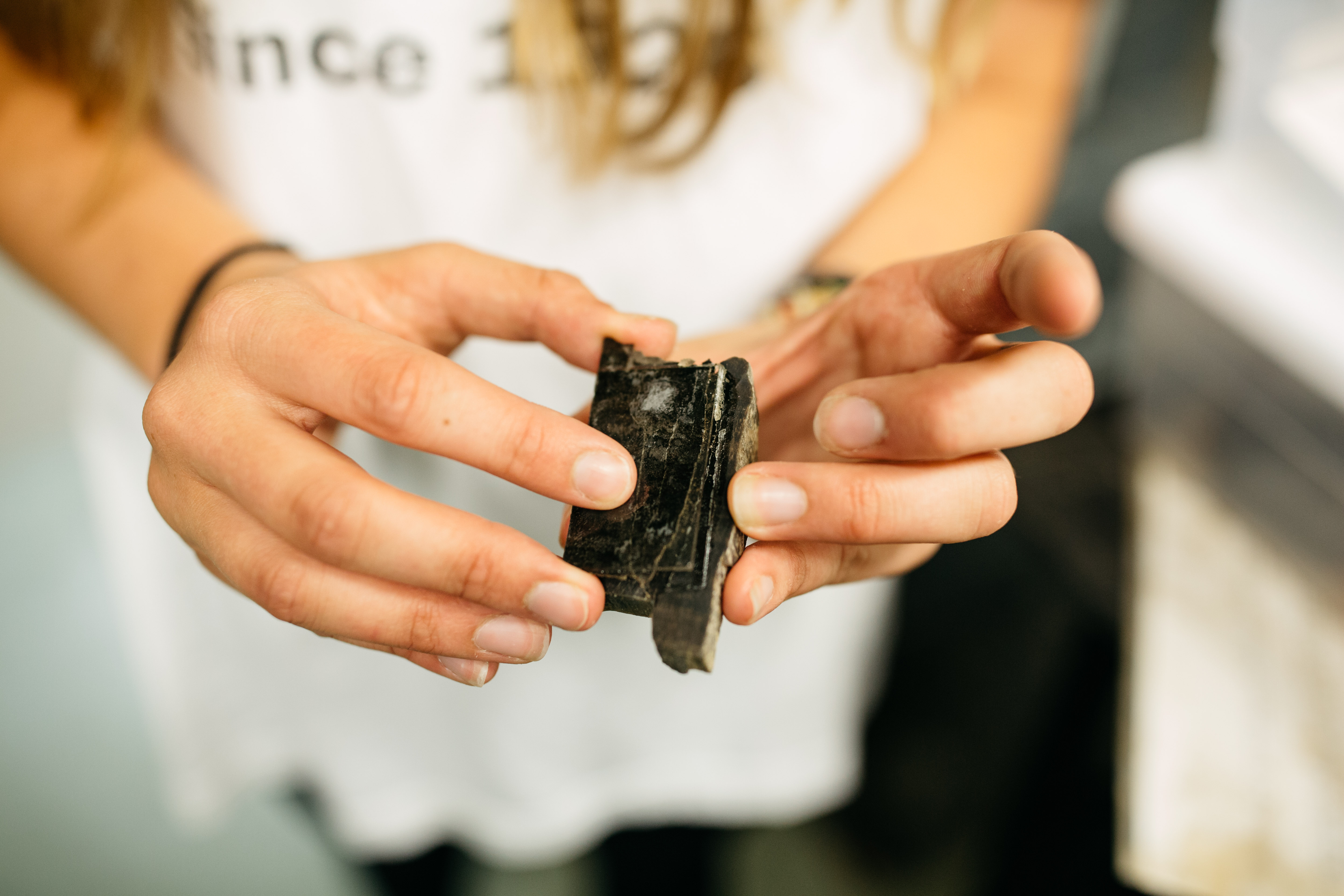 As EXCEL Scholar for Dave Sunderlin,  associate professor of geology, Perrotti ’19 spent her summer studying ancient petrified wood loaned to the College from Petrified Forest National Park in Arizona. As its name implies, the park is strewn with petrified wood, trees that became fossilized and crystallized with minerals millions of years ago.

The project originated thanks to an opportune encounter between Sunderlin and a National Park Service geologist during the geology department’s 2016 summer interim field course. Every other summer, Sunderlin and Larry Malinconico, associate professor of geology/geophysics, take 20 students to the Southwest to do fieldwork in several national parks.

Geologist Bill Parker overheard Sunderlin talking with his students, priming them for what they were about to encounter. After the students took off to explore, Parker, who is the park’s chief of science and resource management, approached Sunderlin. “He said that they know surprisingly little about the wood fossils in the park and wanted to know if I would be willing to look at a few petrified wood specimens to further their understanding,” Sunderlin says. 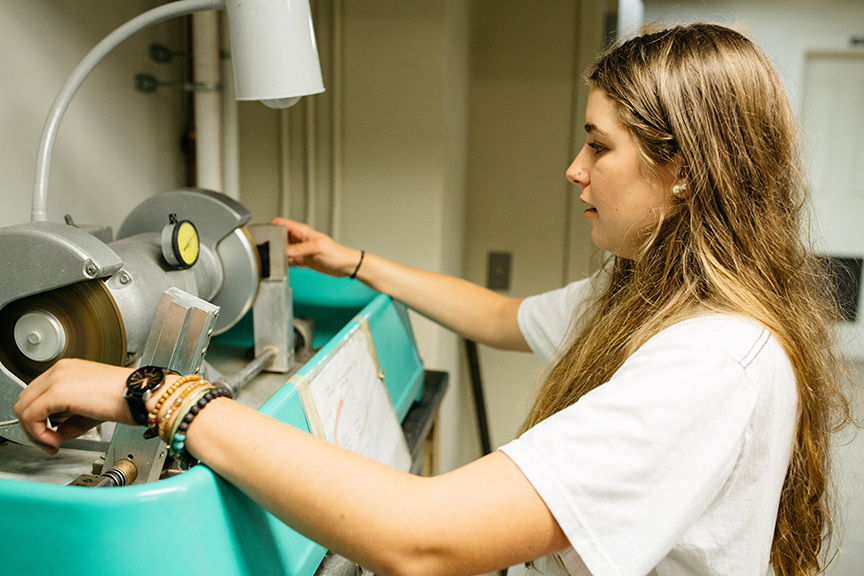 Sunderlin, a paleobotanist who describes himself as “more of a leaf guy than a wood guy,” focuses his research on the Eocene epoch, which at 55 million years ago is quite modern compared to Parker’s Triassic-period fossils. He told Parker that while he didn’t have the expertise to precisely identify the trees’ species, he would be happy to see if he could uncover details about the mineralogy of the petrifactive process that preserved the wood.

“Preservation minerals are important because they can tell you about the environment at the time the wood fell,” Sunderlin says. “By looking at the sedimentary rocks in which these were preserved, you can identify if the tree was in a river or a swamp, for example. There has been much reconstruction work about what Arizona used to be like, and it appears it was an environment similar to the modern-day Amazon.”

Back on campus, Sunderlin recruited Perrotti, a geology and engineering studies double major, who took the National Parks field course as a first-year student and had expressed interest in summer research opportunities. Perrotti also had a skill that was critical to the project: She knew how to create thin sections, thanks to the petrology course taught by Tamara Carley, assistant professor of geology. 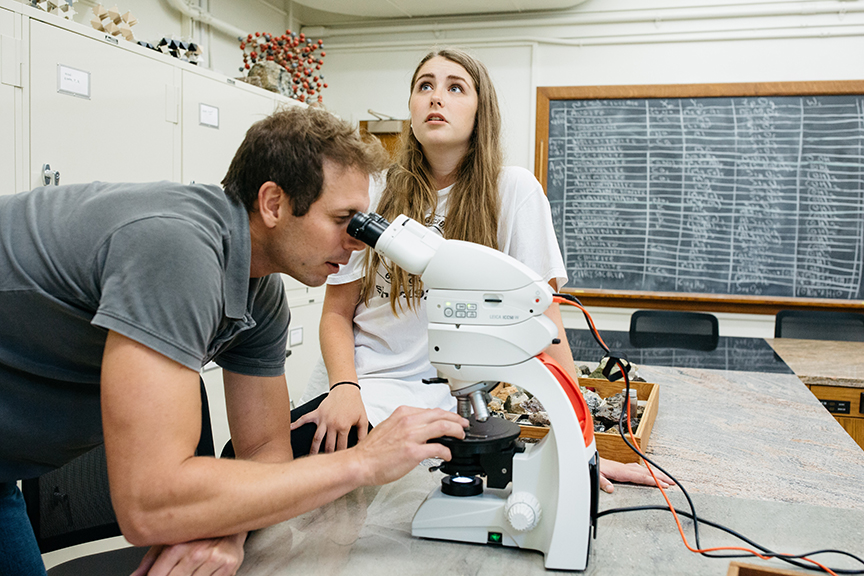 Making a thin section of rock is a painstaking, multi-step process. Over the course of four days for each sample in the geology lab, Perrotti used multiple tools—including rock saws, a hot plate, and a grinder—to get the specimens down to one-hundredth-of-a-millimeter thickness.

She then placed the delicate slides under the College’s most sophisticated petrographic microscopes for imaging of the wood’s cellular structure.  She also used the College’s X-ray diffractometer and scanning electron microscope to capture even more detailed images and chemically characterize the fossils.

“Creating thin sections to the proper thickness can be difficult,” Perrotti says. “But it was really rewarding to know that I was helping the National Park Service. The images we captured are very rare—high-quality images of some petrified tree types from the Petrified Forest don’t exist, even in textbooks.”

Sunderlin and Perrotti noted that tree rings appeared quite detailed in the thin sections, a sign that the tree preserved quickly. Had the process been prolonged, rings and cells would have been distorted.

“The images show the wood anatomy really well—astonishingly well with more detail than I expected, which is a credit to the lab work that Justine did so well,” Sunderlin says. 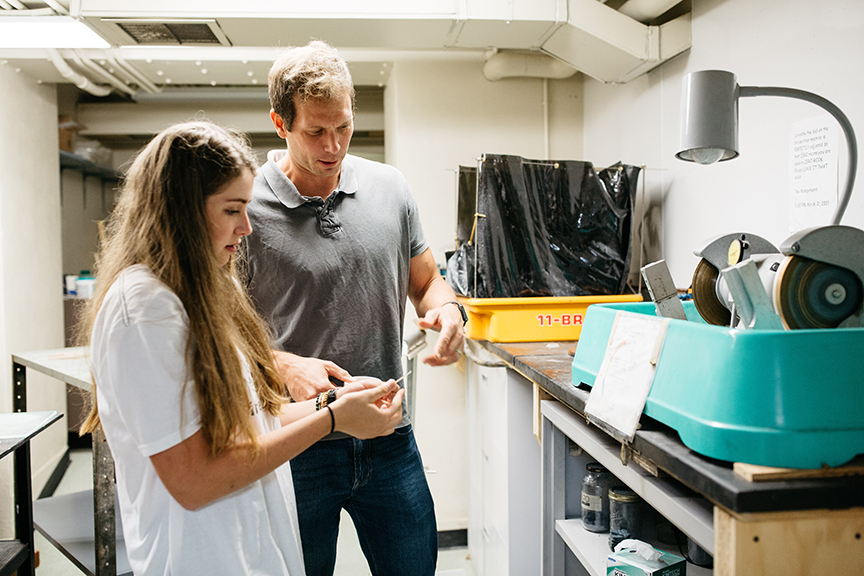 Perrotti also found traces of gold in one of the samples, which could be a sign of hydrothermal volcanic activity since gold can concentrate in close association with volcanoes.

Sunderlin will send Perrotti’s data and thin sections she created to Parker for further study.

“We collaborate with universities fairly often, but this type of study is incredibly rare,” Parker says. “We are excited to gain a better understanding of the fossilization process. It’s not entirely clear how wood fossilizes and how long this takes. Professor Sunderlin’s research will help with these questions.”

The national park course is just one of the many experiential opportunities the geology department offers students. Sunderlin and Malinconico rotate the national park excursion with an Iceland course. Sunderlin took students fossil collecting in Maryland in mid-September, and he and Malinconico spent fall break in October with students in Wyoming. Geology students also have the opportunity to travel to Hawaii with Malinconico and New Zealand with Professor Dru Germanoski.

“The fieldwork we do with these interim courses and other trips is very valuable,” Sunderlin says. “It stimulates research possibilities and scientific directions. It’s the best way to learn geology.”

“What can we learn about ancient warm environments that can be useful in predicting the behavior of future systems under warmer conditions?” Sunderlin says. “The present is the key to the past. The past is the key to the present. And both can help us predict the future.” 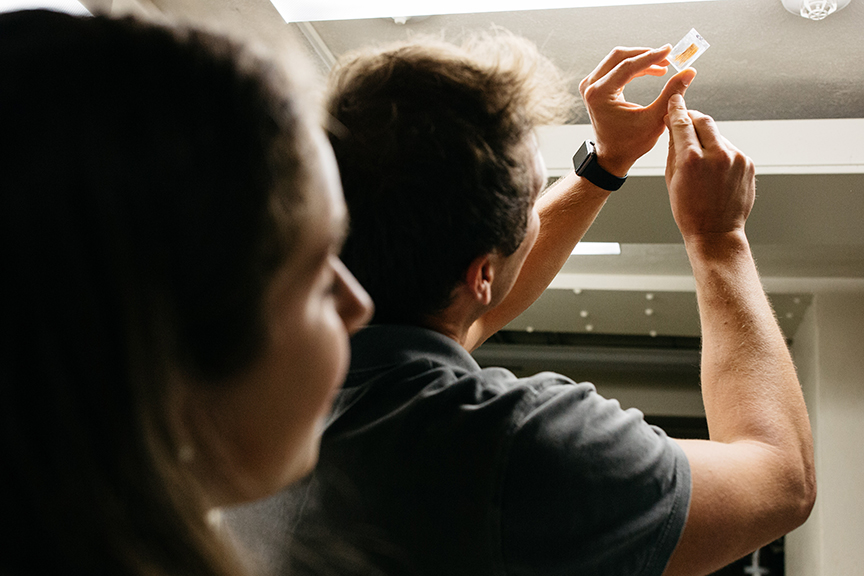