More than 60 astrophysicists from prestigious universities and research facilities around the country and Canada spent three days at Lafayette in November as part of their ongoing quest to unlock secrets of the universe.

NANOGrav astrophysicists study pulsars, remnants of dead stars that emit beams of radio waves, to detect gravitational waves—ripples in the fabric of space and time.

It was back in 1916 when Albert Einstein predicted the existence of gravitational waves via his theory of relativity. But it wasn’t until 100 years later, in 2016, that they were directly detected by the Laser Interferometer Gravitational-Wave Observatory (LIGO).

This was a monumental discovery that thrilled the scientific community, including members of NANOGrav. “The discovery is super-exciting,” Nice says. “It’s really energized our work.”

While NANOGrav and LIGO share the same goal—to detect gravitational waves—they go about it from two very different directions.

In contrast, NANOGrav scientists are looking for waves from supermassive black holes, more than 100 million times bigger than the sun. This research takes the big picture into account. Rather than studying the evolution of stars, it’s looking at the evolution of galaxies. And that requires many, many years of data collection.

That data collection uses large radio telescopes in Puerto Rico and West Virginia to time bursts of radio waves emitted by pulsars. These pulses normally occur very exactly and predictably, so if they arrive early or late, it’s an indication a gravitational wave affected their travel to Earth. 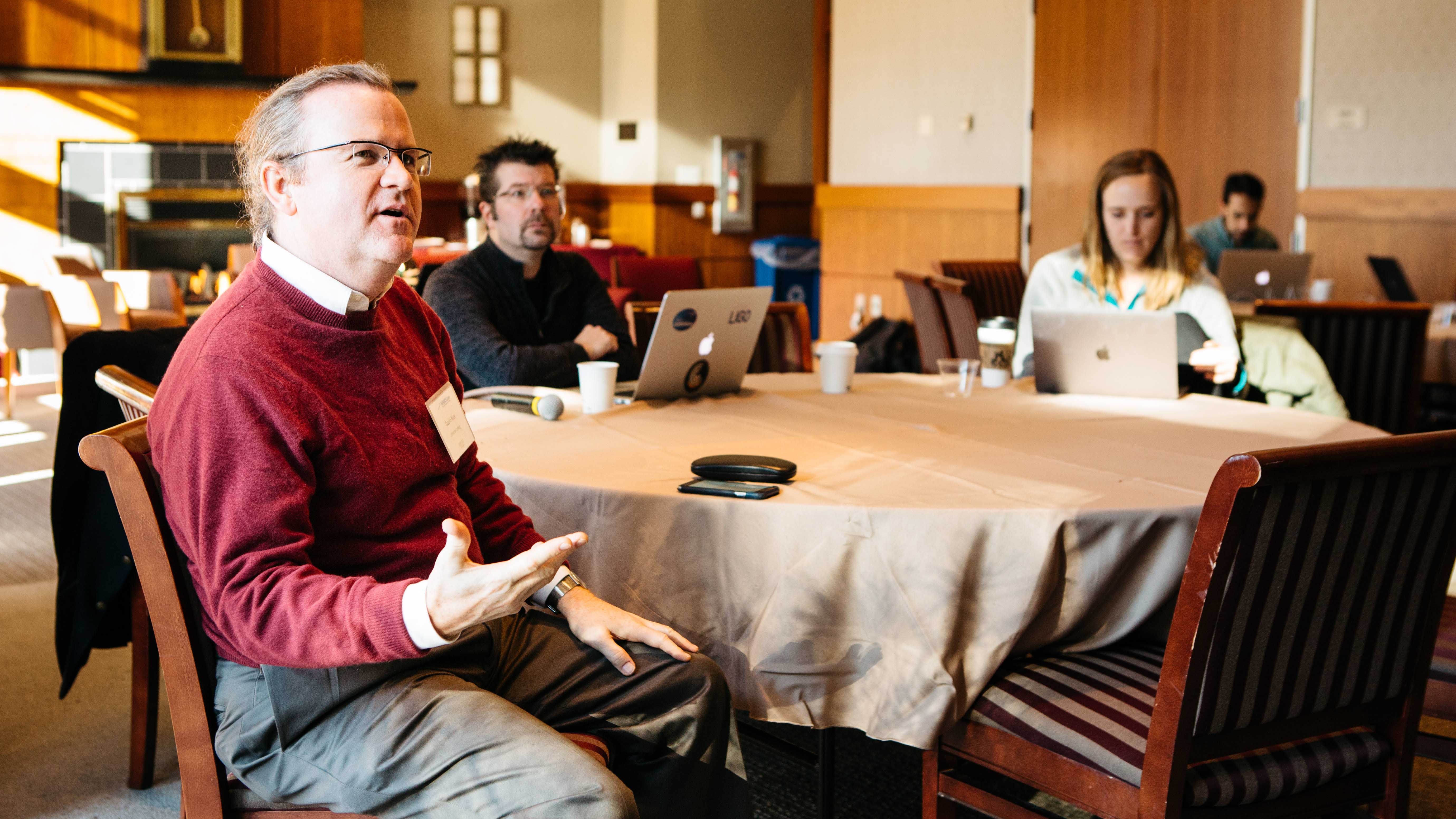 “LIGO detects waves that are maybe 10s of a millisecond in length,” Nice says. “We are looking for signals that are large scale and occur over many years. The equations we use are the same, but ours is a very long-term experiment. We are likely to gradually see hints of a signal, and over a couple of years it will emerge and become stronger and stronger as we get more data.”

NANOGrav astrophysicists plug away on this research project from their various home bases across North America, and they gather together twice a year to share findings and advance their collaborations. Nice organized the latest meeting at Lafayette with Megan DeCesar, a postdoctoral researcher who works with him. One of their EXCEL Scholars, Charley Western ’20, presented his summer research findings on pulsar timing to the group.

DeCesar, who says she’s loved astronomy since she was a kid, learned about pulsar timing as an undergrad and was immediately hooked. Recent advances in the field have proven it’s an exciting time to be an astrophysicist.

“The detection of gravitational waves is a huge human achievement,” DeCesar says. “It was a moment where I felt so proud of humanity. It was widely accepted that gravitational waves existed, but the confirmation opens up new areas of research and enables us to look at the universe in new ways and with a better understanding. It’s just amazing and fascinating to me, and it’s exciting to be able to contribute.”