Growing up outside Boston, Emily Smith ’18 had only a vague idea of what rowing was.

But Head of the Charles? The biggest two-day regatta in the world, located on the Charles River practically in her backyard? That Smith knew.

On Oct. 20 and 21, Smith, president of the Lafayette crew club, got her chance. She and her teammates competed against Division I schools like University of New Hampshire, University of Massachusetts, and University of Vermont.

And, in front of just about everybody from her old neighborhood who turned out to cheer her on, Smith and her Lafayette family owned it. The women’s 4+ boat took the second-place medal from a field of 36 teams. 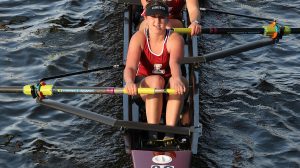 The day of the race

“We as a team, because we’re so small, don’t often send boats,” Smith says. “But because last season went so well, we really wanted to take the opportunity to go to as many regattas as possible and compete. I know I want to compete as many times with this boat as possible before I graduate.”

The team medaled six times last year, including five golds, and edged University of New Hampshire for the American Collegiate Rowing Association (ACRA) National Championship in Gainesville, Ga., in May.

Prior to walking onto College Hill, none of the women in the silver-medal boat had ever rowed before.

“My dad rowed in college, so I knew a little bit about it,” Smith says. “But he never told me I should row, because I would have just done the opposite of what he told me.”

Still, she wanted to be part of a team. Any team. Smith had run on her high school track team, and at Lafayette. She was searching for the same sense of belonging.

She found it in the crew club. She and Nicole Harry ’19, Rachel Marbaker ’19, Carolyn McDonough ’18, and Teresita Galarce-Crain ’18 have become more than teammates.

“One of the most important things to me is making sure everyone feels like it’s a family,” she says.

But how do you go from never having rowed before to grabbing a silver medal in one of the nation’s most prestigious races?

Smith credits coaching. Assistant coach Derek Richmond, a local attorney, provides training for the novices. And varsity coach Rick Kelliher has 35 years of experience skippering collegiate rowing teams. He was named the ACRA Women’s Coach of the Year for the Mid-Atlantic Region. As luck would have it, he lives minutes from campus.

“He’s just always willing to go out on the water when it’s cold and we don’t want to be there,” Smith says. “Five a.m. but he just … I can’t explain how he does it.”

The team was dealt a loss this year when coxswain Julia DeFranco ’17 graduated. Smith’s roommate, Galarce-Crain, stepped into the role.

“Head of the Charles is a coxswain’s race,” Smith says. The river’s twists and turns require airtight direction from the person barking orders.

Galarce-Crain pored over maps of the river, learning its nuances.

“She memorized who we were against, who was in front of us, who was behind us,” Smith says. “She probably saved us like 30 seconds in the race because she did such an amazing job.”