There is no arguing with logic. Seeing a shark circle nearby, feeling fear, and swimming away, hopefully with little splashing or thrashing, are all functions of the brain.

The brain is the focus for two Cheston Elementary classes at Lafayette. The kindergartners and fifth-graders are guests in assistant professor Lauren Myers’ Educational Psychology class.

In one class, kindergartners move among three tables and learn about neuroplasticity, parts of the brain, and how practice makes perfect. In the room next door, fifth-graders are doing the same as they drum, learn from failure, and use the globe to discuss memory.

Each mini-lesson is taught by a group of Lafayette students in Myers’ class. 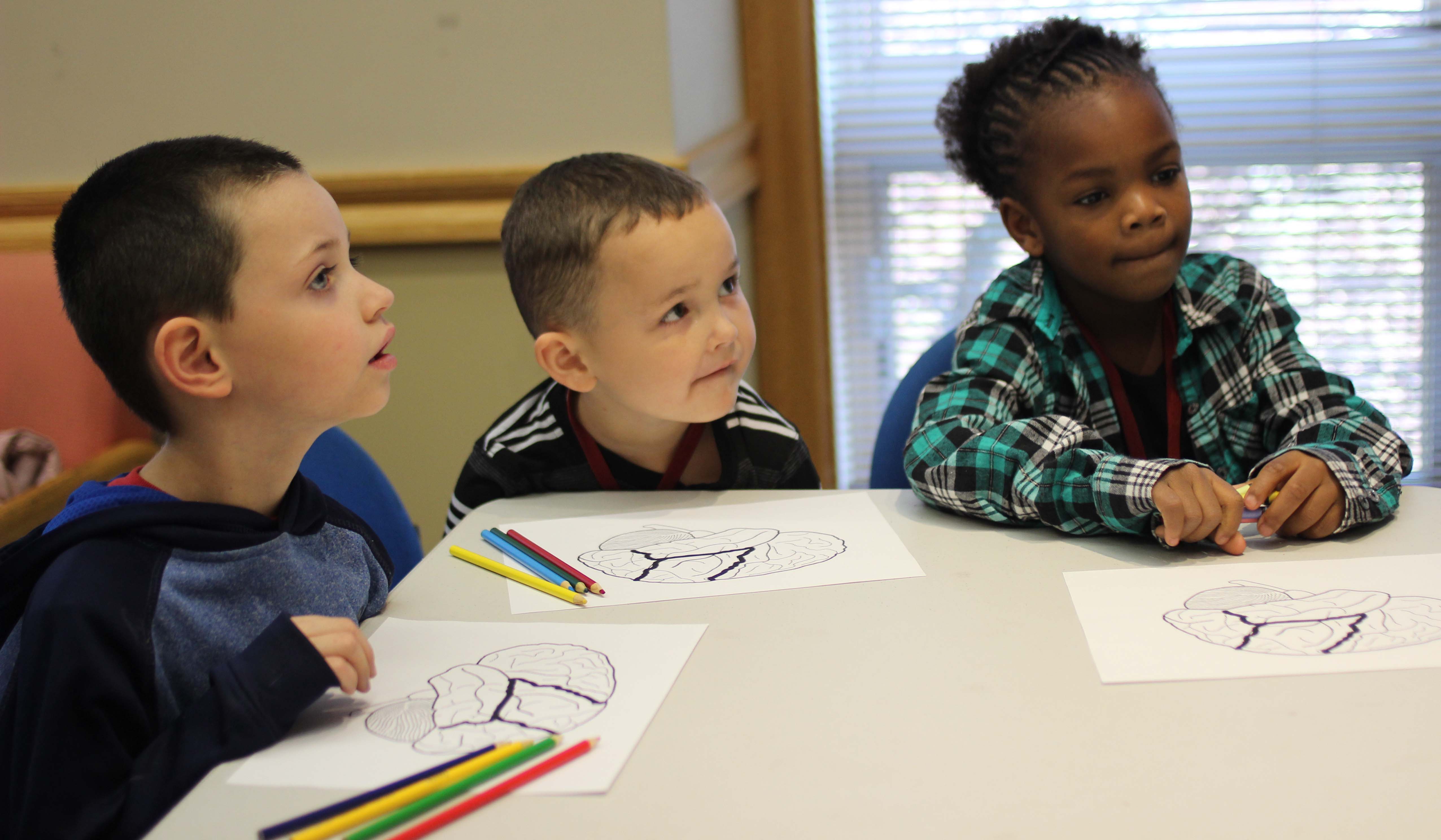 On a table in the fifth-grade room is an office box. Like a handkerchief in a clown’s sleeve, Lafayette students keep pulling out items and handing them to a few fifth-graders … a beach ball, basketball shoes, hat, scarf, five binders, and more. The fifth-graders are laden with stuff. The task? Fit it all in the office box.

They begin to stuff it, rearrange it, and eventually just pile it up.

The box is a representation of their working memory. “You just can’t hold it all in there,” says Elise Reynolds ’18.

Luckily, a big duffle bag, representing long-term memory, is placed on the table. Students begin to transfer the items. While jammed to bursting, all of the items fit.

But how could the fifth-graders use and develop these tools in their own lives? Memory aids! The exercises go global as fifth-graders look at a map and learn about France, Russia, and Spain. Each country introduces a different device to help move information from working memory to long-term, like imagery, mnemonics, and connecting new ideas to old ideas. 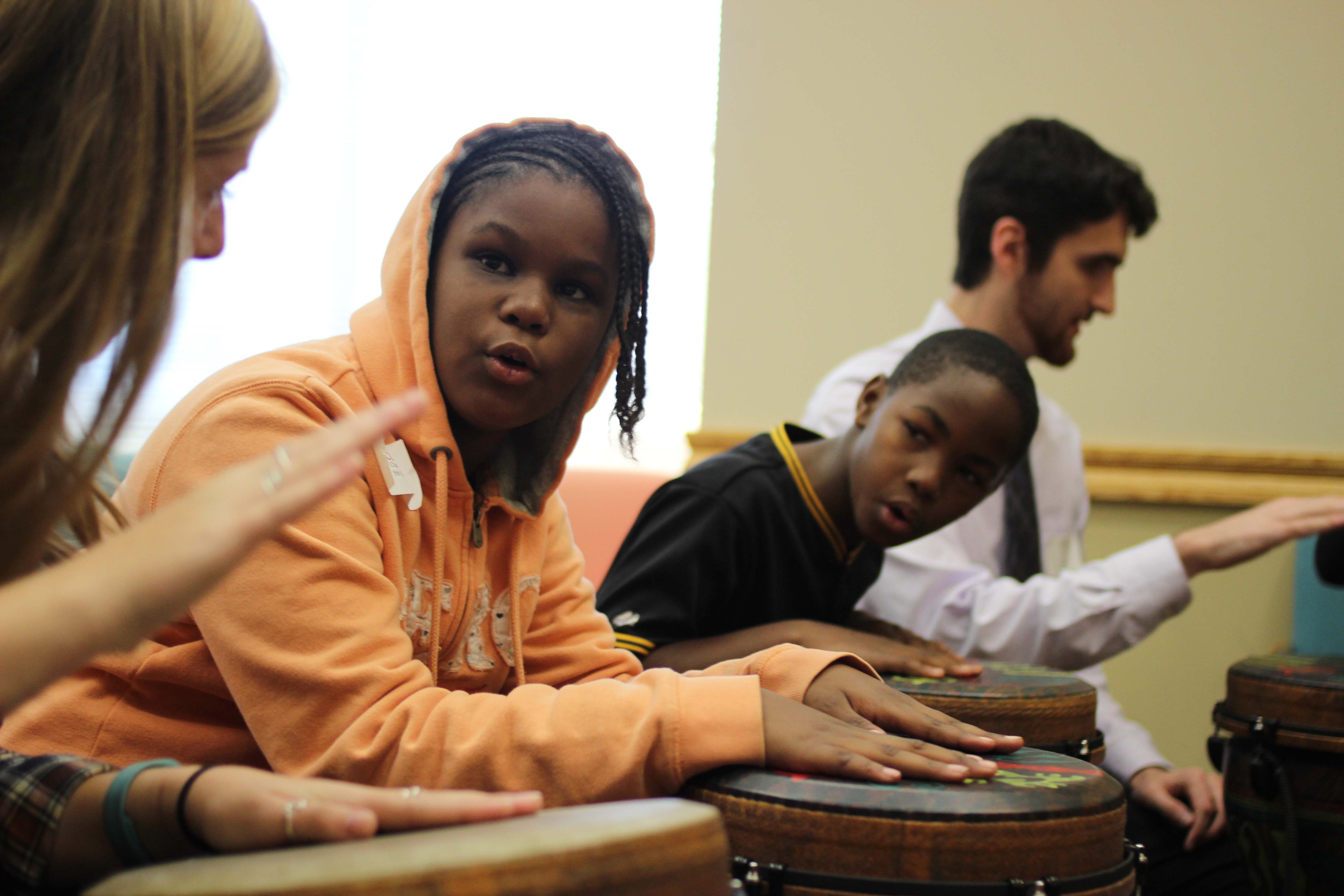 At another station, fifth-graders are beating tables and then drums. Mary Kate Brunk, Sarah Morris ’20, and Sean Gorman ’18 are leading the drumming circle. They start students on a table, following musical patterns. Then come the drums. Again, students practice the patterns.

Gorman is a natural at teaching and drumming. He is a member of the College’s Percussion Ensemble and soon will perform a piece he composed  at an ensemble concert.

“I taught seventh-graders over the summer in a Philadelphia school,” he says. He wows the fifth-graders with a few beats to demonstrate where practice can lead.

“Transforming a novice into a professional can happen if you adopt a growth mindset,” Morris says.

That term is one that resonates with the fifth-graders. It is plucked from the district’s “Leader in Me” program that uses Steven Covey’s Seven Habits for Highly Successful People.

Brunk reinforces this by adding, “Learners become leaders who can change the world.”

This is an important message. 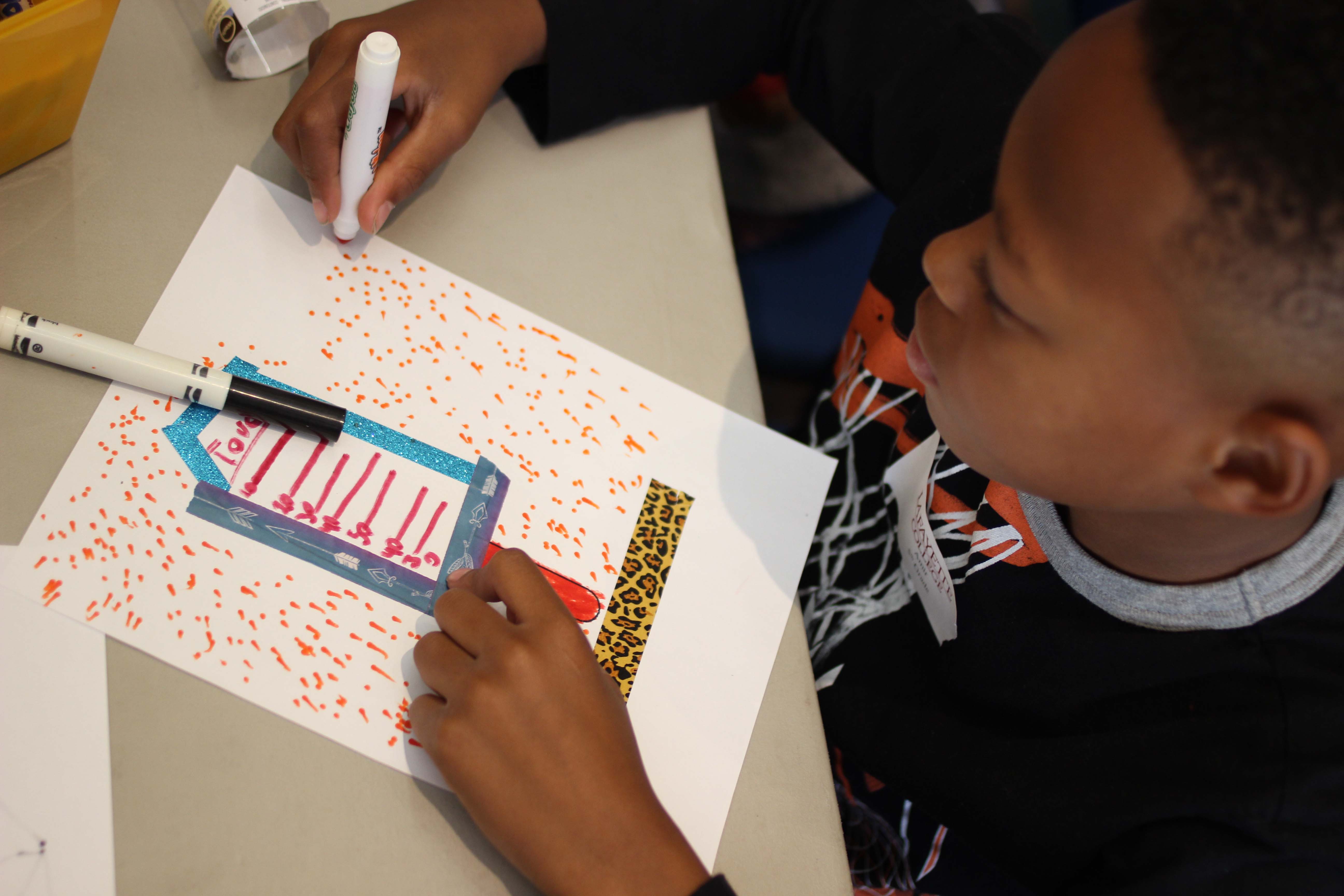 Cheston Elementary is one of two United Way Community Schools in Easton. United Way of the Greater Lehigh Valley is focused on leveling the playing field for schools where students face barriers to success. The schools become a hub of services that include on-site medical and dental, food banks, clothing closets, and housing resources. These services can help prevent issues that distract from learning.

Today’s class is part of a pilot program created by Center for Community Engagement that focuses on enhancing educational outcomes of core curriculum by bringing Lafayette faculty, Cheston teachers, and both Lafayette and Cheston students together.

Myers’ class has been visiting the Cheston classes all semester. “I wanted the students to observe the concepts we are reading about and discussing in class,” she says. Each student has visited each class for two hours.

During her observations, Brunk notices how concepts have shaped classroom management including autonomy.

Morris adds, “I got to see the students in a gym class where the teacher used timeouts strategically to entice students to see what they were missing and choose to return.”

These adjustments in the classroom can redirect students away from tiny daily failures. 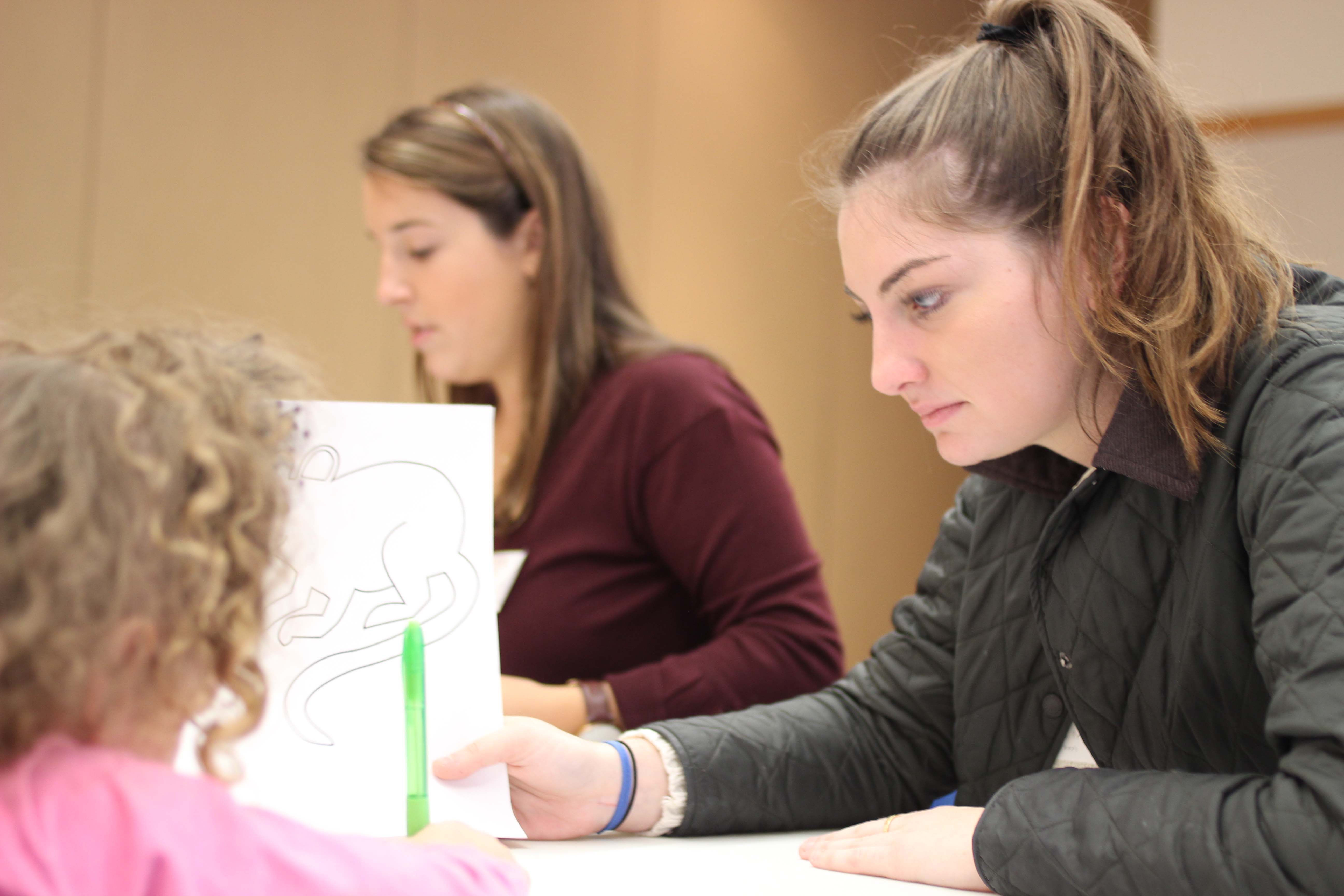 The last table in the fifth-grade room hits that lesson home even more. Lafayette students at that table show some examples of failures that turned out to be real successes … like the creation of Mickey Mouse, popsicles, and potato chips.

They then talk of their own failures in math, bike riding, driver’s tests, and skiing.

The fifth-graders draw one of their failures on a popsicle-shaped paper, turning it into brilliant shades of marker, stickers, and ribbons.

In the next room, kindergartners are also making art. They are drawing on brains. Each lobe is a different color–each lobe responsible for getting them away from that shark.

“All of them work together to help you learn,” says Lauren Wisniewski ’19. This message is another from kindergartners’ lessons from school.

It’s also a lesson Wisniewski has learned in her class. Using an approach called Meta Mindset, a conceptual model that helps students navigate a learning journey but not get overwhelmed by its demands, Wisniewski applied the mindset to her team’s lesson planning.

“We gathered inspiration for teaching the parts of the brain and collaborating as a group, but we faced obstacles in communicating the ideas to kindergartners,” she says. “We had to find developmentally appropriate ways to use colors and images to communicate big ideas. Eventually we formed a plan but adapted it over the course of the day today based on what worked.” 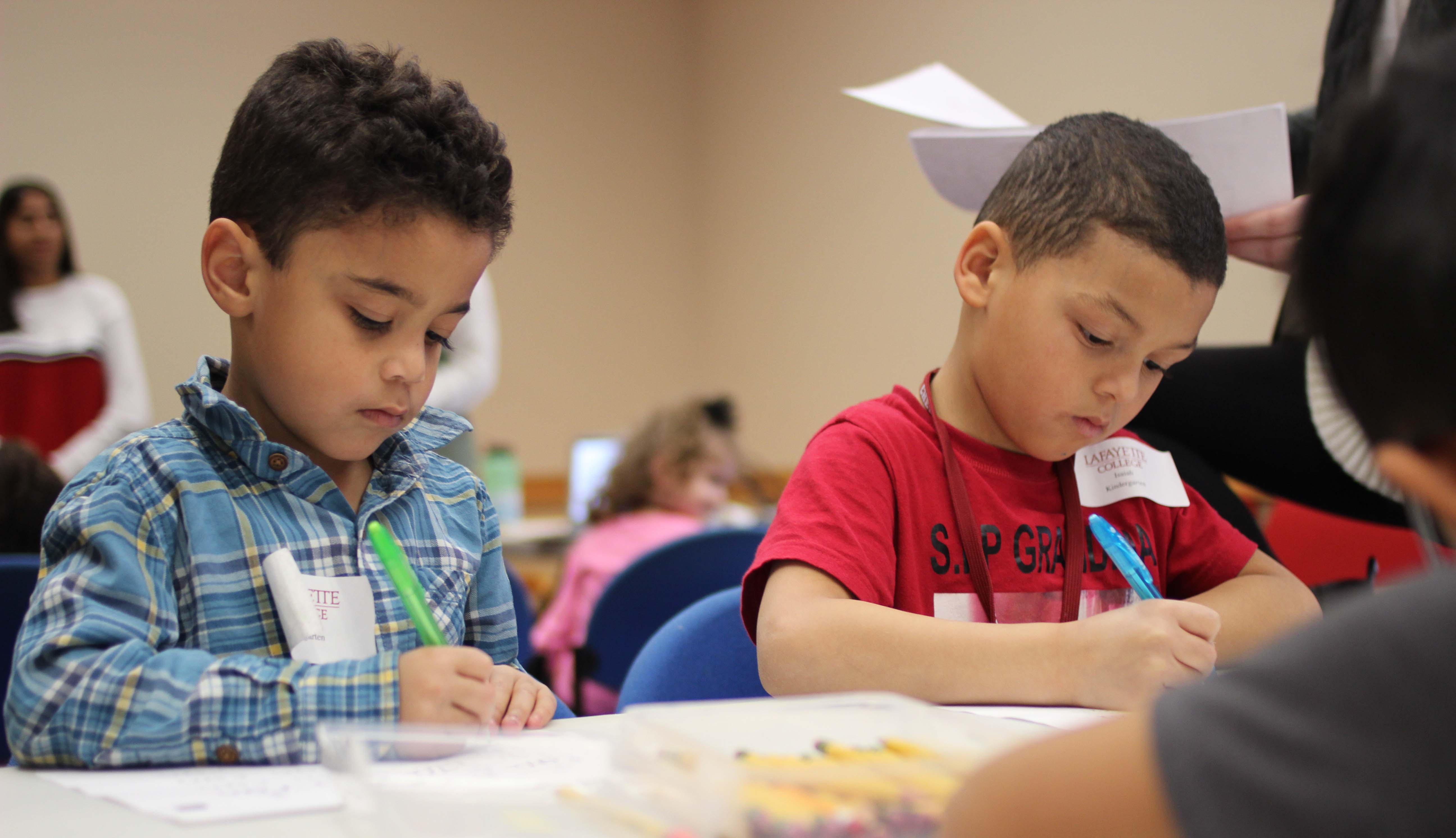 That was one of Myers’ goals in using Meta Mindset in class. “It was exciting to watch the students adapting their plans, altering their pacing, and learning as they went,” she says. “The lessons at each table got stronger and stronger as the Lafayette students repeated it with different groups of Cheston students.”

Take neuroplasticity. Teaching kindergartners that the brain changes in response to experience is no easy task, but the little learners got it, thanks in part to good planning.

They stretch rubber bands to represent how the brain works. Thicker rubber bands are harder to stretch, just like the brain as it learns new material. But adding material to something the brain already knows is like a thinner stretchy rubber band.

Add to it the neuron wave that has students on their feet, holding hands, and undulating their arms up and down.

“This is how a neuron sends its message,” says Aman Samra ’18. 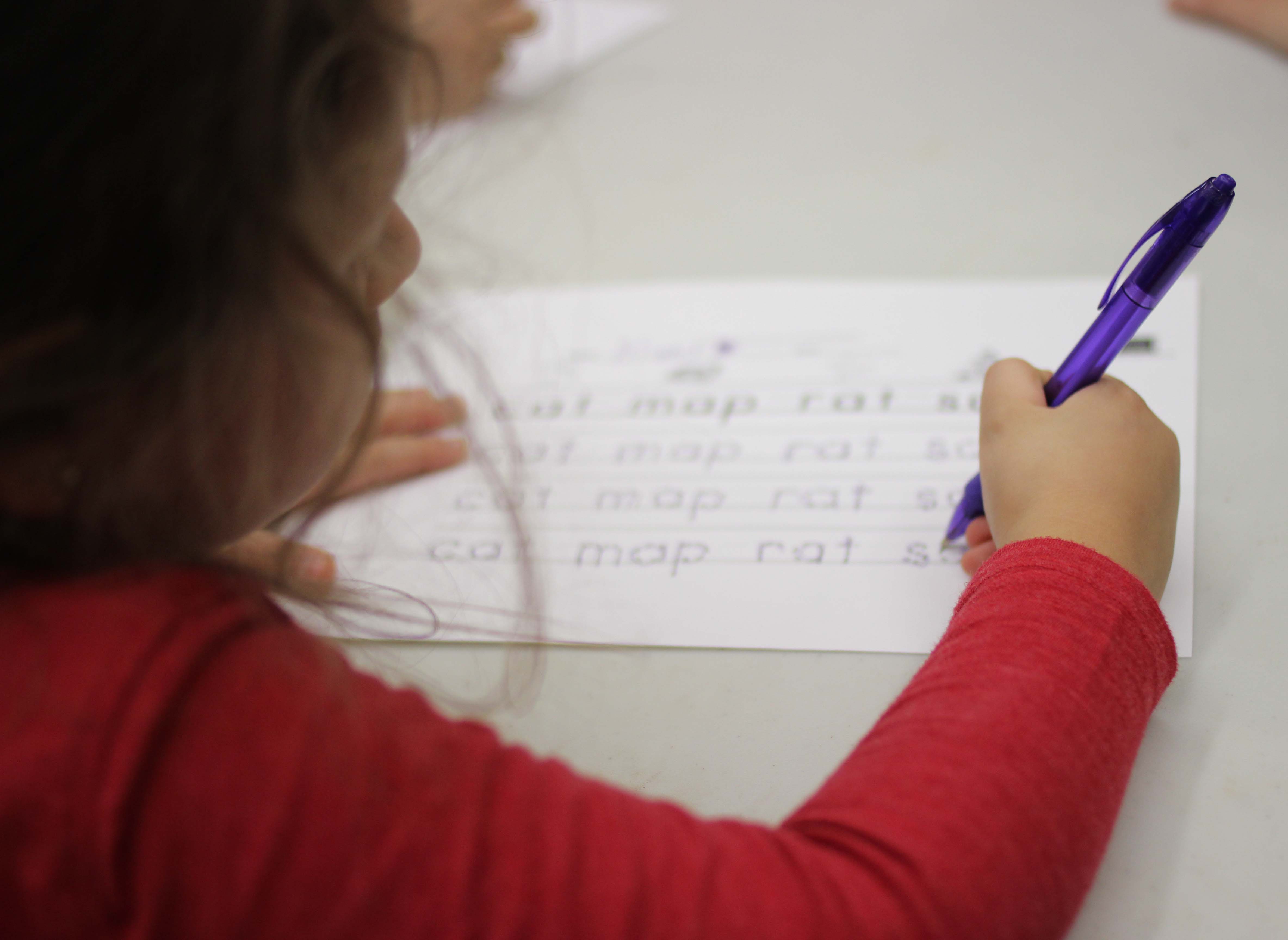 The final table in the kindergarten room is probably the most familiar to the students and most tangible for learning. The exercise is fairly simple. They see pictures of a cat, map, and rat. They trace the words. Then on blank paper they write them again. Some spell one or a few of the words incorrectly.

“This is a great experience,” she says. “The kids are excited to be at Lafayette and see where the college students learn. They are hearing what we talk about with the ‘Leader in Me,’ and I am watching them learn how to be a better learner. They will remember it.”

With all the brain work today, there is no doubt.