When a player goes down, Bert Zarins ’63 rushes the field. Twitter 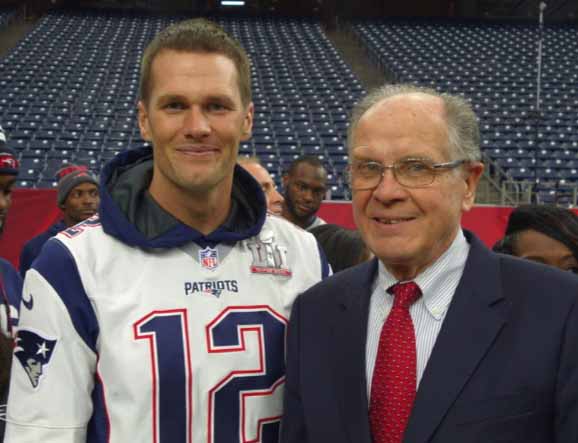 Bert Zarins ’63 has five Super Bowl rings safely tucked away in a drawer in his Boston home—one for each NFL Championship the New England Patriots have won. He was there for every one of those victories, watching intently from the sidelines for tackles and collisions that may require him to run out onto the field to assess and treat a downed player.

Tending to bruised and broken bones and joints of countless professional athletes has proven to be quite an exciting and successful “side job” for Zarins, M.D., an orthopedic surgeon at Massachusetts General Hospital. Zarins has been part of the Patriots’ medical team for the past 36 years, 25 of those in the role as head physician.

During his quarter-century tenure, Zarins attended every home and away game and was responsible for all medical care for the team while treating recreational athletes at the hospital.

If this juggling act wasn’t impressive enough, consider that during the same era, Zarins also treated ice hockey and soccer players as head physician for the Boston Bruins and New England Revolution teams. 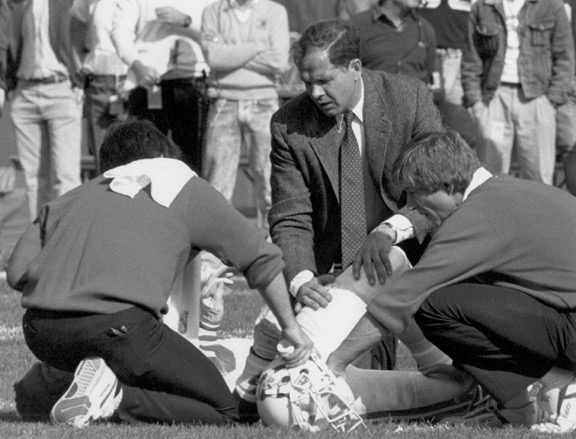 Today, Zarins, who was a soccer player at Lafayette, is focusing more on repairing injured knees and shoulders of weekend warriors who seek out his surgical skills at Mass General. Although he’s no longer the Patriots’ head doc, he’s still actively involved with the team and will be in Minnesota as they face off against the Philadelphia Eagles in their sixth Super Bowl on Sunday. Will he be flying home with ring number six? Here we chat with Zarins about his legacy with the Patriots dynasty.

How did you land the job with the Patriots?

“After Lafayette, I went to medical school in Syracuse, completed a surgical internship at Johns Hopkins and an orthopedic residency at Harvard. I joined the staff at Massachusetts General Hospital in 1976. I was on the ground floor of the field of sports medicine and was one of the early surgeons to become proficient in arthroscopic surgery. I became the team physician for the Boston Bruins in 1976. In 1982 the Patriots contacted me to become their head physician.”

What is something people may not expect about the job?

“It’s very exciting and very rewarding to work with professional athletes, but it’s also very stressful and time-consuming. My job would be to stand on the sidelines during a game and run out onto the field if someone went down. I would assess the situation and decide if a player could return to the game. You are under the microscope with everything you do. There is ongoing pressure because everyone wants the athlete to play.”

What injuries do you see most often?

“Knee injuries are the most common. Ankle and shoulder injuries are also common, and concussions are a concern. Neurologists are now part of the medical team to specifically address head trauma. On average, one or two players each game get injured and will not play the following week. The NFL requires each team to have two physicians on the sidelines for each game, but there are always more. There are usually four to five physicians on the sidelines plus assistants and fellows.”

How time-consuming is the job?

“Working with three sports teams at once—plus seeing patients at the hospital—was a challenge. If an important player was injured, I would have to drop what I was doing and go to the practice facility, which may be an hour away. So, I was always behind schedule and catching up. But it was never boring. Also, I did not do this job alone. A team of physicians, consultants, and the resources of MGH all helped take care of the players.

What has been the highlight of your career?

“Working with the Patriots was always fun. I would say their first Super Bowl appearance in 1986 was the most memorable because it was such a surprise and something new. But one event that stands out was being the head physician for the U.S. Winter Olympic Team in 1984 in Sarajevo. I oversaw the medical care for all the Olympic athletes—ice hockey, Nordic and alpine skiing, figure skating, speed skating, luge, and biathlon. I spent one month with the teams leading up to the games, and then I got to walk in the opening ceremonies parade. That was a once-in-a-lifetime experience.”

Do you consider yourself a Patriots fan?

“Well, you really can’t be a fan when you are the team doctor. You must be objective and make correct medical decisions. You must develop good relationships with the player and do what is best for him. I feel very fortunate to have been able to do this.”