Their research culminated in a student-organized workshop held at Lafayette’s classrooms in Lower Manhattan where invited scholars and activists addressed the various themes based on their work and experiences. 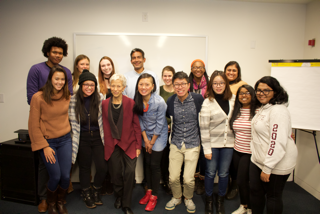 Vora, associate professor of anthropology and sociology, said it was exciting to have so many ideas percolating in one room as the group deconstructed the model minority myth, a persistent stereotype of the “studious Asian American” who excels academically, often in math and science.

It has surrounded the American education system for a long time, a characterization that Asians are naturally smart and successful, a constantly rising bar to which others should aspire.

“There was so much energy in one room from the conversations—the students came prepared and asked amazing questions,” she says. “The speakers were impressed that undergraduates organized the workshop.”

From student-selected topics, guest speakers examined how Asian men use basketball as a way to construct masculinity and break down racial prejudices; Asian American family values and transnational adoption; sexuality and what it’s like to come out as a gay Asian American; political solidarity and debunking the myth that Asian Americans are apolitical.

“There was a palpable energy in the room with students interacting with the speakers,” Vora says. “The community leaders and academics treated the students like intellectual peers. The students got so much empowerment out of the exchange. They got a taste of what it’s like to be an academic and experience some of the things we do as scholars that they don’t always get to see.”

Rehnuma Nasrin ’20, co-president of the Asian Cultural Association, says there was a huge responsibility not only to make sure the day was informational, but also to create a space to inspire conversations instead of lectures.

“Because we had such prominent speakers at our workshop, we wanted to show that we had done research and were ready to converse and ask questions on their level,” she says.

“There were bumps along the road, notably finding speakers who were available,” Nasrin adds. “But in the end everyone we invited was incredible and addressed the points about the themes we wanted to talk about as a class.”

When people think about the model minority, they usually think about how well Asians perform socially, economically, and intellectually.

“However, like other racial groups, Asians do face adversity, which isn’t talked about as much as their success,” she notes. “There are so many experiences that are not discussed, and we wanted our workshop to be the space to discuss those experiences.”

“We wanted to pick topics that everyone was interested in researching and are not widely discussed in talks of the model minority myth,” Nasrin says. “It was thrilling and enriching to be part of such a dynamic roundtable conversation.”