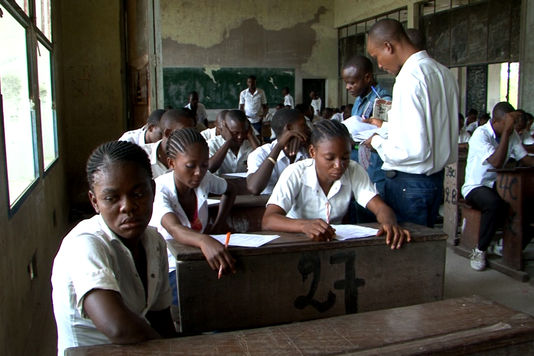 A scene from the film Examen d’État

The Tournées Francophone Festival might be a French import, but it touches more than language.

That’s why the French Cultural Services-funded film festival involves more than just the Department of Foreign Languages and Literatures. This year, the College sought input from other departments, recognizing film’s ability to resonate across disciplinary boundaries.

Selecting films from the French Culture Services stable of titles were Africana Studies, the departments of Foreign Languages and Literatures, Film and Media Studies, History, and the International Students Association. The festival also has received input from Lafayette’s Tapestries Project: Voices within Contemporary Muslim Cultures.

This is the seventh year Lafayette has been selected to offer the festival, which began Jan. 31. The remaining films:

La Noire De — The first film by Senegalese master Ousmane Sembène and first feature film produced in sub-Saharan Africa, it’s the story of Diouana, an illiterate nursemaid from Dakar who follows her French employers to the Côte d’Azur with dreams of discovering France. But once in Antibes, she finds herself enslaved, trapped in the couple’s well-appointed holiday apartment and on the receiving end of their domestic frustrations. (Selected by the Africana studies department)
7 p.m., Feb. 28, Oechsle Auditorium
https://www.youtube.com/watch?v=BoKAOfcQGgo&feature=youtu.be

Fatima — The title character is a middle-aged divorced Algerian woman, cleaning houses and offices from dawn to dusk to provide her teenage daughters with a better future. It takes a workplace accident for Fatima to finally pay attention to her own needs and discover a powerful means of expressing them through poetry. (Selected by the Tapestries program and history department)
7 p.m., March 21, Hugel 103
https://www.youtube.com/watch?v=eHM9rSskaqw&feature=youtu.be