What do I want to do? Where do I want to work? Externs get a taste of various job experiences over winter break. Twitter

When it comes time to apply for your first job or graduate school, real-world career-related experience isn’t just a nice thing to have on a résumé. It’s considered essential.

The Office of Career Services recognizes that. It’s why each year, the team in Hogg Hall facilitates valuable shadowing externships for Lafayette students over winter break. These two- to five-day career-exploration opportunities give students across all majors exposure to a variety of industries, work environments, and graduate programs. This year, approximately 180 alumni, parents, and friends of the College rolled out the maroon welcome mat for 294 participants. Twenty students even doubled up and completed two externships.

“During these experiences, students are immersed in the host’s daily activities, which allows them to gain a better understanding of a field, ‘test drive’ the occupation, and evaluate whether or not this may be a potential career for them,” says Melissa Schultz, senior associate director of career services, who coordinates the externship program. “For our hosts, it can be a meaningful way to support a Lafayette student in a very personal way and leave a lasting imprint on their professional path.”(For more information about the College’s externship program, visit the Career Services website.)

From television studios to medical offices to courtrooms to sports arenas, Pards gained exposure to a variety of environments, as close as the Lehigh Valley and as far as Los Angeles and Canada. Here’s a peek at a few of their experiences. 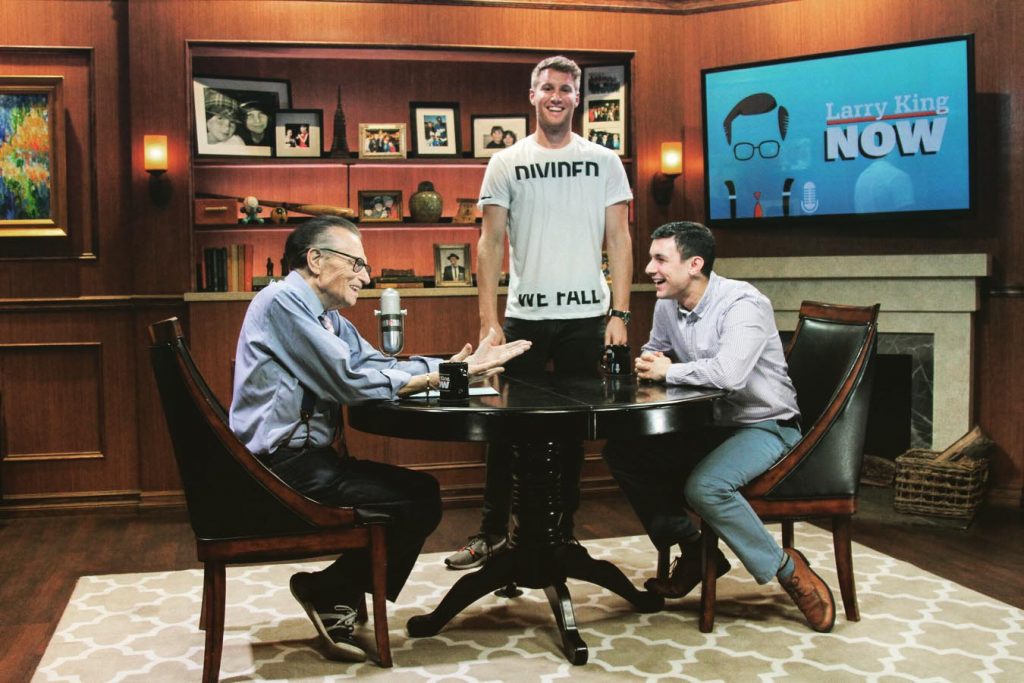 Matt Ackerman ’18, an English and policy studies double major (far right), spent four days with Kyle MacLelland ’11 (center), a producer for Larry King Now in Los Angeles. “The externship with Kyle confirmed my initial suspicions that I would love broadcast production,” Ackerman says. “I’m certainly looking to postgrad opportunities in this area. It combines the best of both worlds to me—it’s both journalistic and theatrical. It’s putting on a show. I love the energy behind it all.” 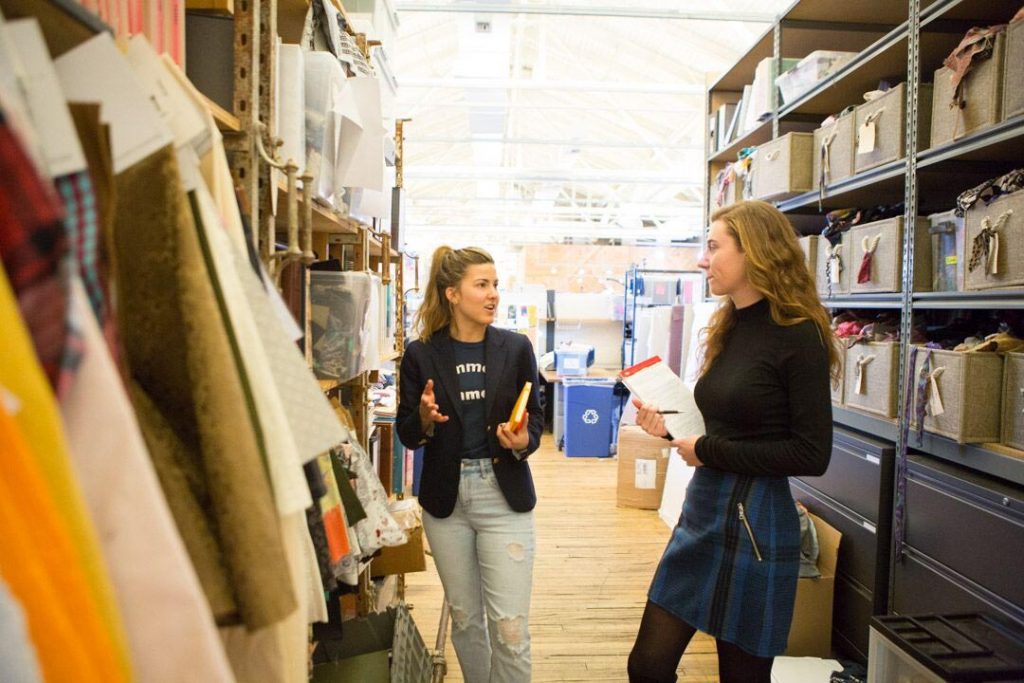 Olivia Hineman ’19 (right) shadowed Aimee Smith ’14, an assistant buyer with Urban Outfitters, at the company’s Philadelphia headquarters. “I was able to see the balancing between financials and creativity,” says Hineman, an economics and mathematics double major. “Aimee and her team work together to try to make both sides of the business as content as possible. I am hoping to apply my mathematics and economics background to the retail industry, and this externship definitely inspired me. I am excited to explore future career paths within the retail industry.” 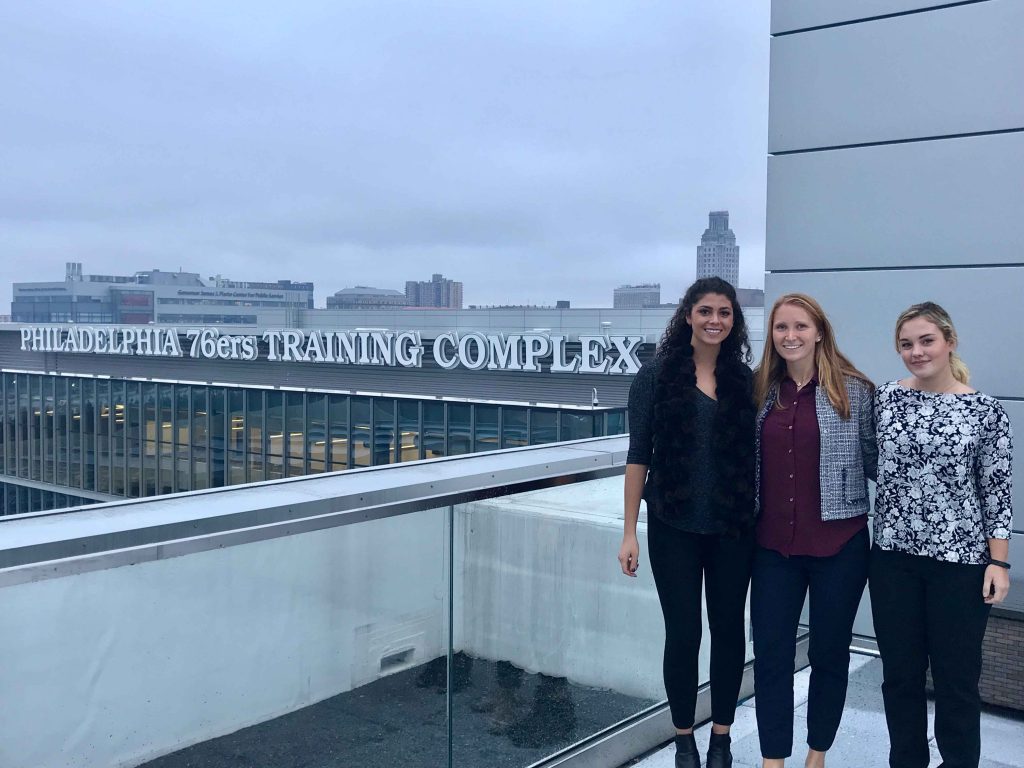 Annette Snow ’16, member services account manager with the Philadelphia 76ers (far left), hosted two externs: Ataliah Dressler ’19 (government & law and English, center) and Allie Abacherli ’19 (government and law, right). “It was so interesting to talk to so many people who work with the 76ers and learn about their role in sales, marketing, communications, branding,” Dressler says. “Whenever I thought about working in the sports industry before this externship, I really only imagined the players, coaches, announcers, reporters, and people you see on TV. It was valuable to see a whole other side of the sports industry. There is so much that goes on behind the scenes—from ticket sales to marketing to sponsorships. It was interesting to see how much work goes into making a team successful.”

Celine Lawrence ’20, a philosophy major, shadowed the Honorable Richard Hughes ’83 of the Luzerne County Court of Common Pleas in Wilkes-Barre, Pa. “By participating in this externship, many of the fears I had possessed regarding becoming a lawyer were appeased,” Lawrence says. “I was afraid of becoming a trial lawyer since I’m such a quiet person. But after witnessing a lawyer who was also quiet perform well in the courtroom, and after learning about ways to cope with losing a trial, I no longer feel that fear. I’m more enthusiastic about pursuing a career in the field of law, and I’ve actually considered becoming a judge in the future as well.” 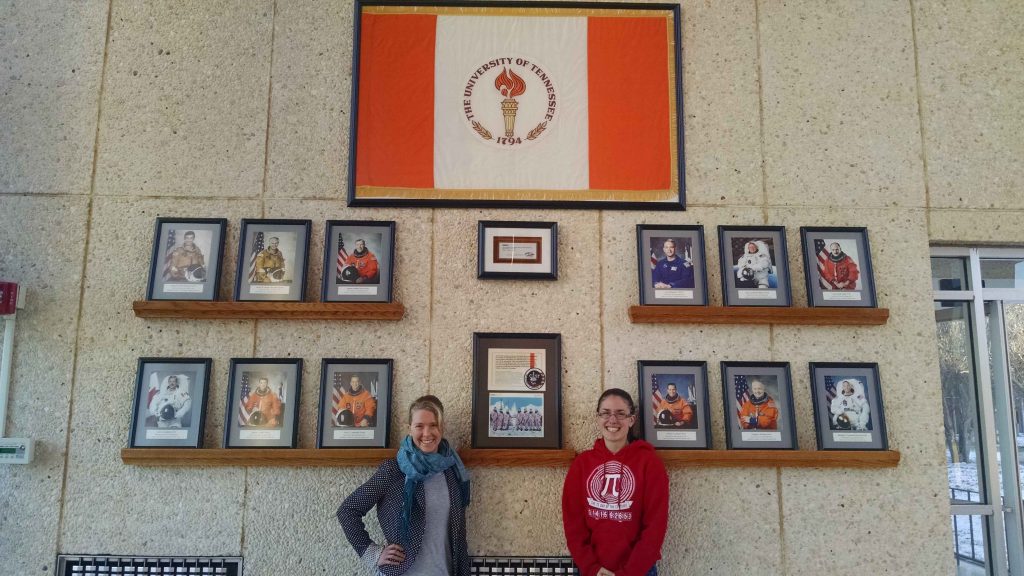 During her externship at University of Tennessee Space Institute (UTSI) in Tullahoma, Tenn., Rachel Marbaker ’19 (left) toured the institute’s hall of fame (pictured here) with her host, Lara Lash ’13 (right), an UTSI graduate student and research assistant. “During my externship, I explored the graduate campus and laboratories, met students, administrators, and professors, attended some classes, and picked Lara’s brain for advice on graduate school selection and applications,” says Marbaker, a double major in mechanical engineering and mathematics. “Visiting Lara solidified my desire to pursue a Ph.D. and helped me realize how active I need to be in the graduate school search process in order to fully understand the programs, professors, and fellow students at each laboratory.”

Taha Rohan ’19 (second from left) shadowed several Lafayette alums during his externship with PerPay, a fintech startup in Philadelphia. Rob King ’17, Chris DiMarco ’98 (founder and CEO), and Amanda Case ’17 gave Rohan an overview of what it’s like to work for a startup and in a major urban environment. “I want to make a difference in my home country of Pakistan and improve the energy industry,” says Rohan, a chemical engineering major. “I think alternate energy sources have potential, especially in developing countries. Shadowing at a startup taught me that it’s important to streamline my ambitions and start with a small audience and test out ideas rather than going large scale right from the beginning.” 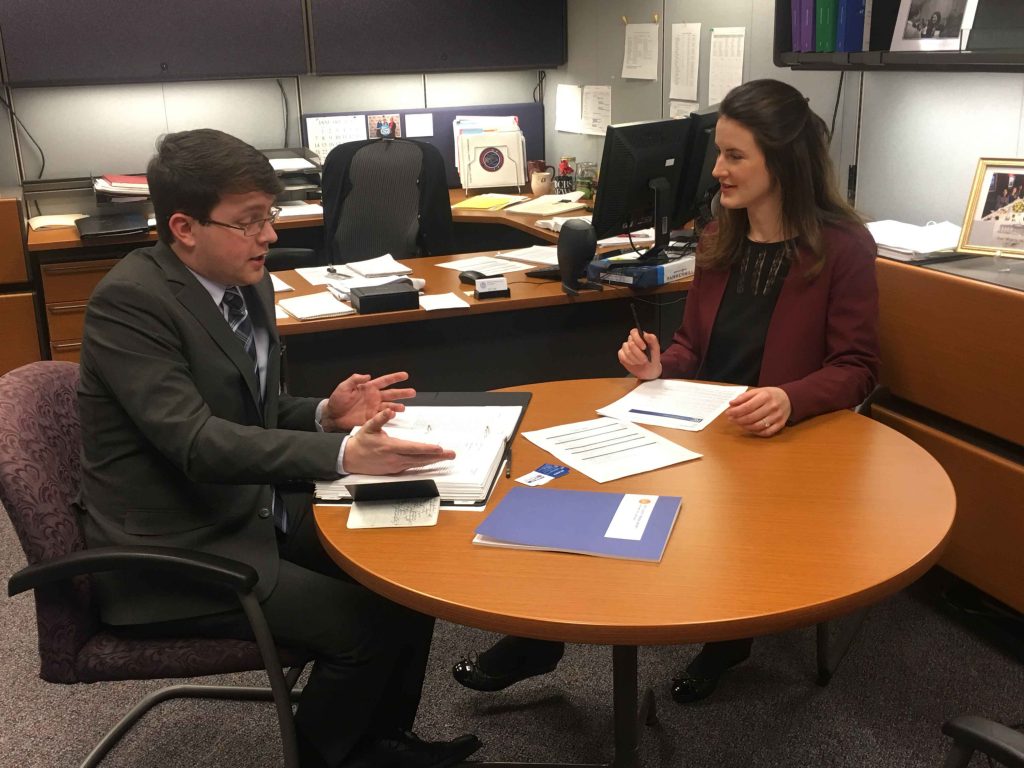 Kevin Milton ’19 spent his externship shadowing Alison Nemeth ’09, who works as media legal adviser to the chairman of the Federal Communications Commission in Washington, D.C. “At the FCC, I became intimately acquainted with the internal processes of a federal agency,” says Milton, a government & law and English double major. “I’d always wondered how agencies operated, how they governed internally, and how they are held accountable by the branches and the general public. My host explained the rule-making process and the ways in which the agency responds to public opinion via the ECFS. I’m exploring positions in Washington and New York at various think tanks, lobbying groups, and political research centers. Without my two days at the FCC, I’m unsure if I would be so passionate about taking my first steps toward a career in government this summer.” 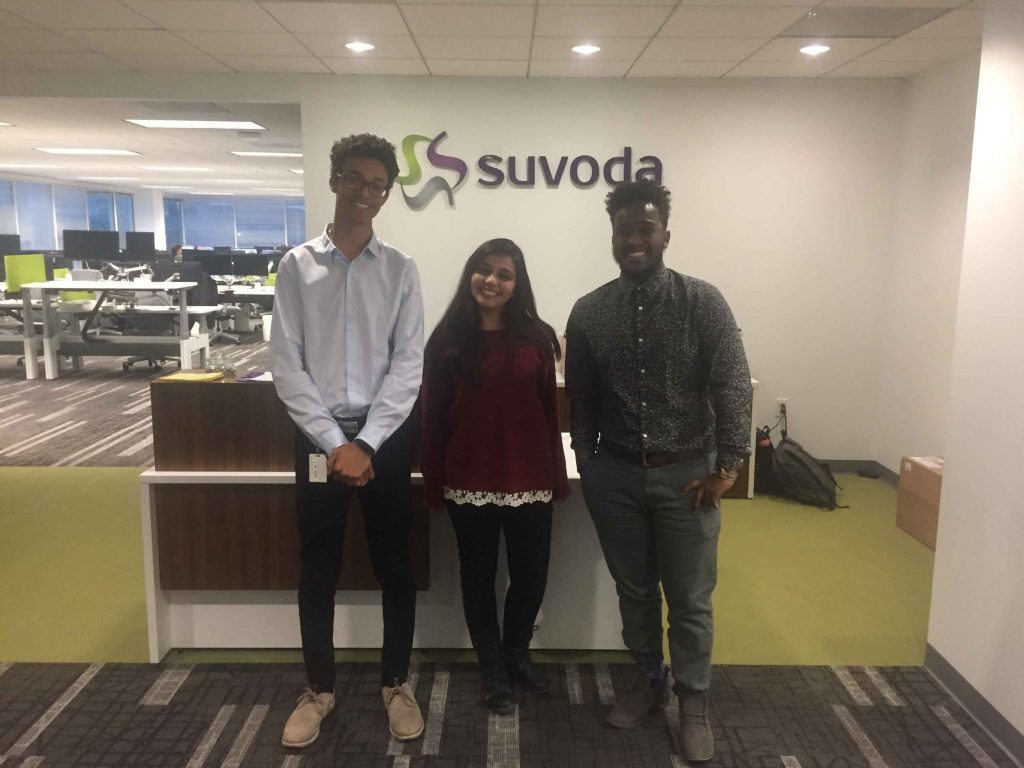 Three engineering majors, Maxwell McFarlane ’19, Noureen Abdelrahman ’19, and Robson Adem ’19 (left to right), shadowed professionals at Suvoda, a software company in Conshohocken, Pa., that helps clients perform drug trials. “I had a very fun experience with the people at Suvoda,” McFarlane says. “The community there was very friendly and welcoming, so I felt comfortable asking questions.” 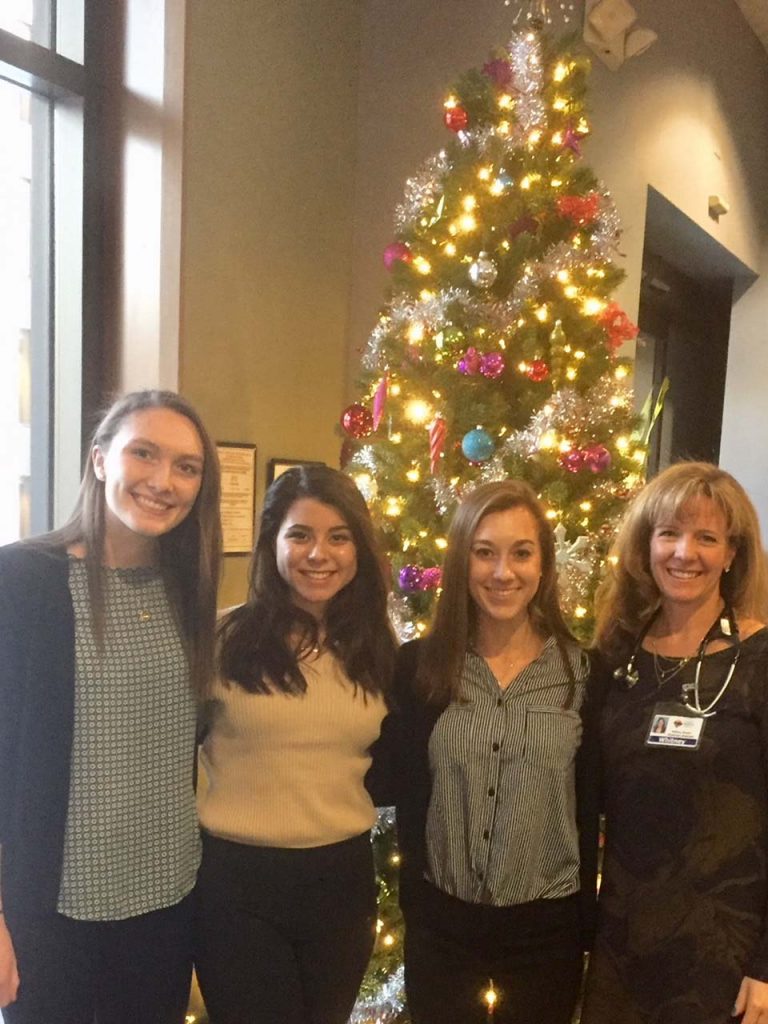 Whitney Gaydos ’96 (far right), lead physician assistant in the cardiology group of Summit Medical Group Foundation in New Jersey, hosted Molly Conrad ’20 (biology), Annie O’Dea ’20 (neuroscience), and Nicole Lauricella ’18 (biochemistry). The three students observed hospital rounds, office visits, and stress tests, plus interacted with radiologists, medical assistants, nurses, and doctors. The multi-day experience concluded with the students having the opportunity to watch live cardiac surgery at Liberty Science Center in New Jersey. “Since high school, I’ve been between 70 and 90 percent sure that I wanted to be a physician assistant,” Conrad says. “After my externship experience, I am without a doubt 100 percent sure that it is the career path I want to pursue. It’s a comforting and exciting feeling, and the externship really confirmed that.” 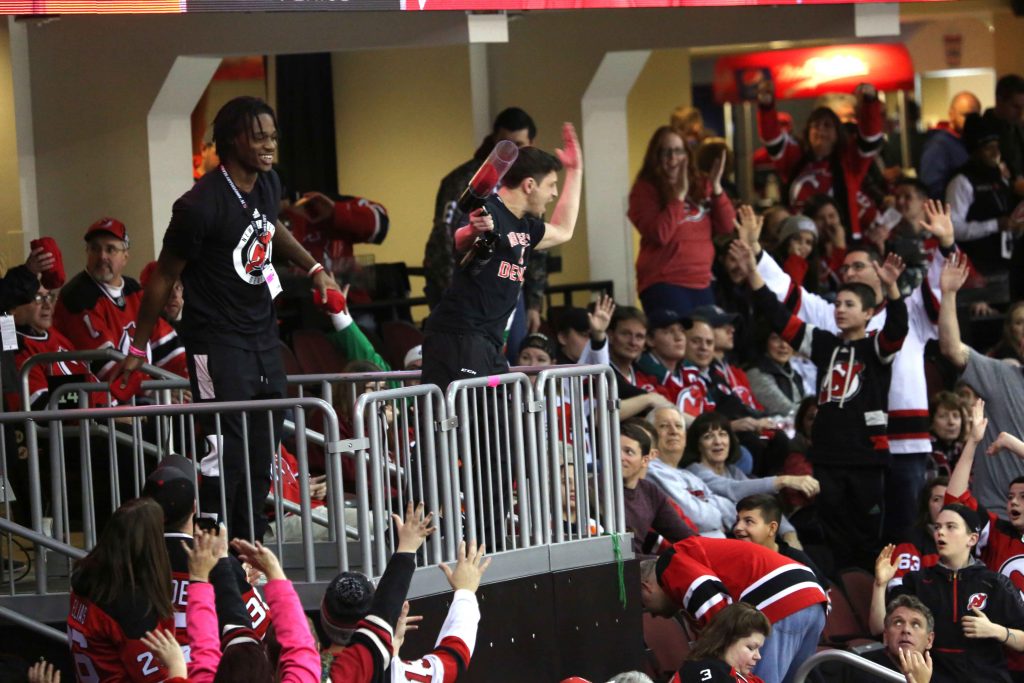 As part of their externship with the New Jersey Devils, Tymir Jones ’18 (film and media studies) and Matt Peters ’19 (film & media studies and theater) experienced behind-the-scenes activities at a professional ice-hockey game with host Alexa Ikeler ’13, associate producer for game presentation and event production. “It was thrilling, as I was able to go on the ice, participate in T-shirt toss, and be up close with the players,” Peters says. “Being inside the control room for the game presentation was incredibly riveting. I got to watch the director of game presentation call all the camera shots he wanted to be shown to the public, and it was tense and high-paced. It was certainly an environment I can see myself enjoying in the future.” 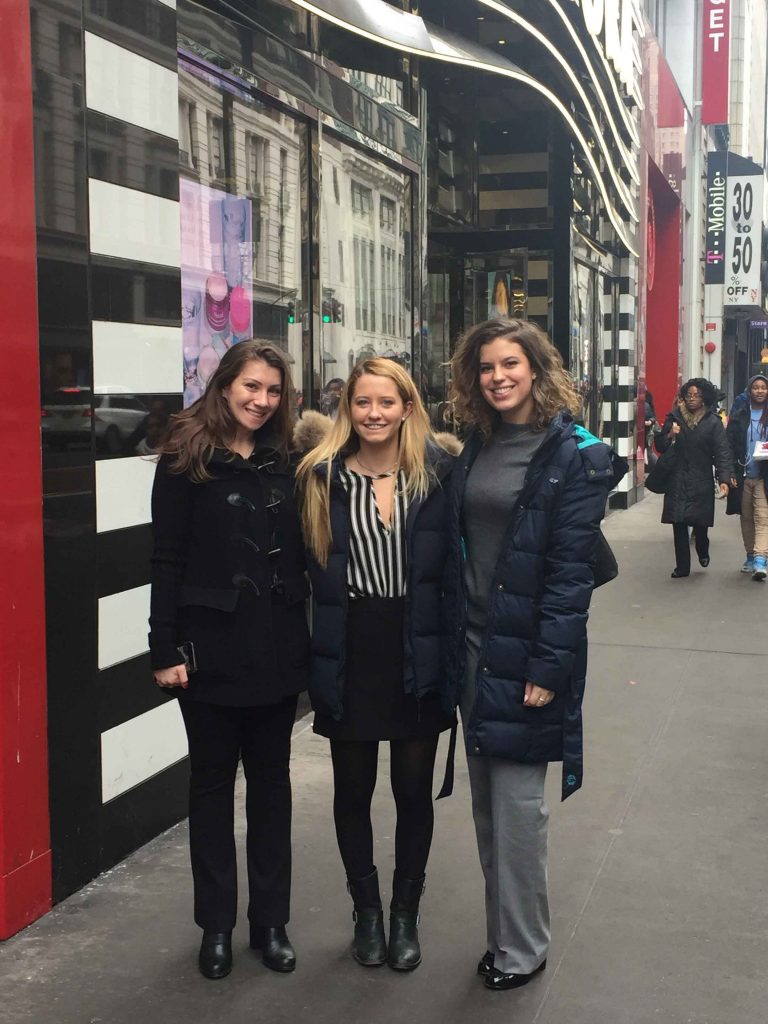 Tess Burke ’18 (psychology/sociology), Grace Conrad ’20 (economics), and Katherine Cook ’18 (international relations and affairs) went to New York City to shadow Jodi Katz ’97, founder and creative director of Base Beauty Creative Agency. The students were charged with doing a competitive analysis of a beauty brand. Following their fieldwork at Sephora (shown here), the students presented their findings and recommendations to Katz and her colleagues.

Rebecca Blocker ’20, a civil engineering major, completed two externships over her winter break. First, she shadowed host Christopher Blakelock ’90 (green sweater), a partner with Cecil Baker + Partners Architects in Philadelphia. Then she spent time with Chris Stanford ’94, a senior associate with Michael Baker International, which has offices in Philadelphia and Allentown, Pa. “I talked with many different employees, and they were all willing to give me tips and advice,” Blocker says. “I think the most important advice was that I shouldn’t rush into specializing in one specific thing and that I shouldn’t try to plan exactly how I see everything in my future. I found this helpful because I sometimes am so focused on how exactly my future will work. It was reassuring to hear them say that it’s OK if you don’t know for sure. That’s what these experiences are for.”

Categorized in: News and Features
Tagged with: Career Services, Externships