Characters from the Trojan War can often seem unreachable and amorphous, yet they stubbornly linger, tugging at us to freely offer eternal lessons to guide our own time and struggles.

RIOULT Dance NY recently spent three days on campus to re-energize and animate the ancient Greek tale through its Women on the Edge … Unsung Heroines of the Trojan War, a fantastical triptych inspired by Euripides’ heroines —Helen of Troy, Iphigenia, and Cassandra—and the fertile imagination of choreographer Pascal Rioult.

For Markus Dubischar, who has always felt strongly about the great potential that lies in connecting Greek tragedy and modern dance, the mini-residency was a treat beyond words.

“What modern dance and Greek tragedy have in common is a relentless drive, thematically and psychologically, to get to the bottom of things. It’s never about the mythological story for storytelling’s sake,” said Dubischar, who heads the classical civilization program.

“Instead, the goal of Greek tragedy and modern dance is to penetrate to expose the deepest layers of our lives, our strengths that keep us going, and our frailty that regularly cause us to fail,” he said. “To give my students the chance to discuss these issues with the artists of Rioult Dance is very special.” 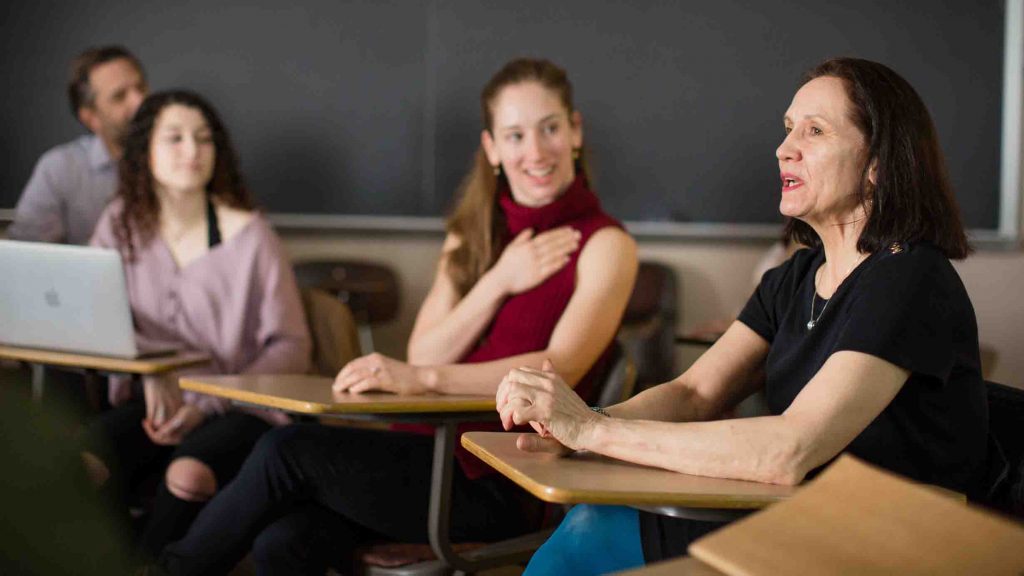 Students in his tragedy class benefited from two classroom visits by Pascal Rioult and members of his company before and after their performance at the Williams Center for the Arts.

For students, it was a rare opportunity to explore the creative energy behind a contemporary interpretation of an ancient conflict and the physical and mental demands of professional dancing, character development, and staging. They also came face to face with a direct connection to Martha Graham, who influenced generations of dance artists with her choreography and techniques. Both Rioult and the company’s associate artistic director, Joyce Herring, had danced with Martha Graham for many years before the founding of Rioult Dance following Graham’s death.

The performance of the unsung heroines brings together an ill-fated Greek and Trojan royal trio— Iphigenia, killed by her father, King Agamemnon, as a sacrifice in exchange for strong winds to propel the Greek fleet; Helen, whose elopement with Prince Paris of Troy may have sparked the Trojan War; and the seer Cassandra, whose foretelling of Troy’s doom fell frustratingly on deaf ears.

In intimate discussions with Dubischar’s students, Rioult said he had specific messages to convey in creating the production—that wars to end all wars still continue to dog humanity and to give voice to women, who were often marginalized in ancient Greek society but who are rising through the #MeToo movement, through the stories of these heroines.

He said PBS footage of Syrian refugee women projected onto a screen amplifies the themes of war and a caged Cassandra’s torment as she’s mocked by naysayers who reject her prophesy about certain calamity for Troy.

As a long-time student and associate of Graham, who was known for staging innovative dance interpretations of myths, Rioult told students that while he believes in “the essence” of his master’s techniques and wants to impart them to a new generation of dance artists, he still desires to make his work uniquely his own.

Hollis Ashby, artistic and executive director for the Williams Center, said serendipity was at work when she booked RIOULT Dance NY at the same time Dubischar and his students were studying Greek tragedy and the Trojan War.

“We saw a wonderful opportunity to bring Pascal and his dancers into the classroom to help enhance the exploration of the Trojan War,” she said. “Markus, who moderated two talks about the performance, provided historical and mythological context.”

Dubischar, who changed his syllabus to prepare students specifically for Rioult Dance’s visit to Lafayette, was delighted that, in the end, everything came together so exceedingly well. What impressed him most were the students’ acute observations and enthusiastic reactions to the performance.

“This was truly a life-changing experience and one I will hold with me for the rest of my life,” said Tyler Sehring ’19. “To hear about Mr. Rioult’s inspirations, which come largely from cinema, was awesome. Simply chatting about works by Ingmar Bergman, which he requires his dancers to watch, was beautiful.”

“What I liked the most about the story of Cassandra was her growth,” she said. “One of my favorite images was that they put her in a cage because she was trapped by this curse, especially when those outside of it were mocking her.

“But once she spends time with all the other mourning women, there is a shift. She doesn’t need to control the future, but she can remember the greatness of her city and be excited for their legacy,” she said. “The entire ensemble coming together with swift, powerful movement embodies the legacy of Troy.”

Angela Shi ’21 took detailed notes of each character but was amazed by Iphigenia’s growth from a teary girl begging for her life to a fearless heroine willingly sacrificing herself for the greater good.

“At the end, Iphigenia had the smile of divination on her face; she has understood the negligibility of human life, and she has transcended into a higher state than anyone else,” she said. “I was awed.”

Clearly touched by the generous responses, Rioult embraced the opportunity to engage with the students, which he described as “as a brightness” that he doesn’t always get to experience.

“For us, this is very special and makes it all worthwhile,” he said. “This is why I do what I do.”