Author Laila Lalami talks about her book, immigration, and the boundaries that separate us Twitter 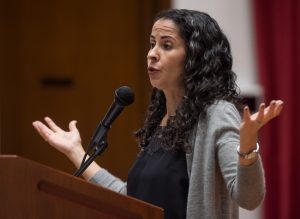 On a night when snow was falling several inches an hour, Morocco seemed a world away, yet Laila Lalami stood on the stage of Colton Chapel in a pair of borrowed gray snow boots. The crowd cozied in as she talked about her book Hope and Other Dangerous Pursuits, this year’s Community Reading.

The novel is a series of stories about four main characters, each with his or her own reasons and ambitions that push each to cross the short but treacherous Strait of Gibraltar from Morocco to Spain. 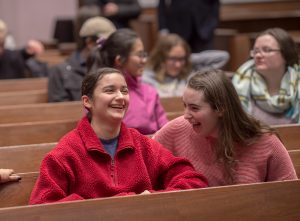 The book was inspired by an article Lalami read in the French newspaper Le Monde.

“Inspiration can come from anywhere, but it takes a long time to understand the pull of a story, the reason why you’re inspired to write it,” she said.

It seems the idea of crossing a border has had a strong hold on Lalami. As a young woman growing up in Morocco, she learned to navigate between two cultures, the indigenous Moroccan culture and the French colonialist one. She spoke French and Arabic, went to a French school, attended mosque, and moved between “the physical and virtual borders between private and public life.” 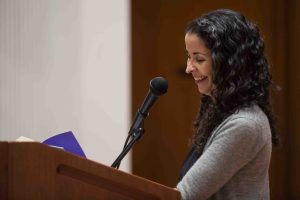 Lalami shared a story of a family trip, heading north along the coast from Marrakesh to Tangier. Her family went to the port of Melilla, an autonomous Spanish city located in mainland Africa. She and her family had to cross the border. Back then, the border was a wooden gate, much like you’d see upon entering or exiting a parking garage. Lalami recalls the guard looking at the family’s passports, but her new baby sibling didn’t have paperwork. Still the guard waved them through.

If the border then wasn’t a rigid international boundary, today it is. The same scene is vastly different. Lalami described a 2-meter ditch that looks like a waterless moat, three 20-foot barbed wire fences, and advanced technology—scanners, night-vision goggles. 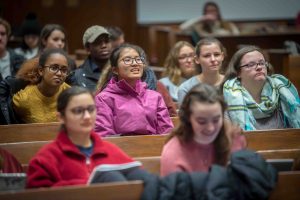 Lalami asked herself, what has changed over the last 20 years? And do people remember that it wasn’t always a militarized zone? “That historical context is often lost when people talk about immigration,” she said.

She recounted how years ago, immigrants didn’t need a visa. There was more free movement between the two continents. Following WWII, European cities, like Paris, needed men to cross over and assist with rebuilding, so temporary workers from colonial territories made the journey. Ultimately many remained in those cities, often living on the outskirts. Eventually, countries like Spain used visas as a way to deter people from crossing continents, but it ultimately created two streams of people—those with papers and those without. 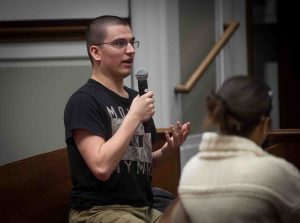 Lalami paused to read the opening chapter of her book:

“Fourteen kilometers. Murad has pondered that number hundreds of times in the last year, trying to decide whether the risk was worth it. Some days he told himself that the distance was nothing, a brief inconvenience, that the crossing would take as little as thirty minutes if the weather was good. He spent hours thinking about what he would do once he was on the other side, imagining the job, the care, the house. Other days he could think only about the coast guards, the ice-cold water, the money he’d have to borrow, and he wondered how fourteen kilometers could separate not just two countries but two universes.” 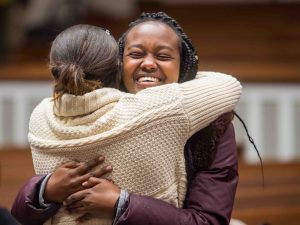 She thinks this is how it starts. “People who have no other prospects begin to dream,” she said. She recalled how satellite TV in the 1990s brought 200 channels to people in Morocco. They saw an amazing life in Europe.

“This allure remains for many, drawing them on a dangerous journey that puts many at risk—carrying drugs and human trafficking. And the border becomes a magnet. People from across the continent are drawn there, escaping conflict, genocide, hunger, and human rights violations,” she said. 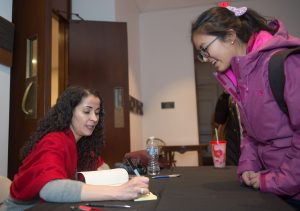 She now sees it as a crisis, and the solution became to police the border, militarize it, and dehumanize it.

This brings us to the present moment. Walls that once fell, like the one in Berlin, are rising again … in Morocco; Israel; Calais, France; and the U.S. She feels walls only make problems more complex and difficult to fix as migrants attempt border crossings at more dangerous geographies—mountains and deserts.

And after such a journey, Lalami questions whether life is what one would hope it would be. 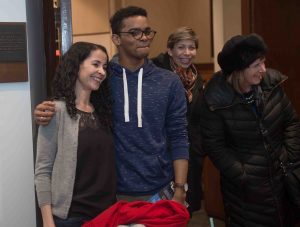 “It shouldn’t be natural for people to risk their lives for jobs and a living wage,” she said.

Immigration is a traumatic experience for those who cross over. “It is not easy to graft oneself into new soil. There is a burden and responsibility to leave behind family and get in a boat. Going to Spain does not mean [you are] better off than staying at home in Morocco. The courage to do so should make immigrants superheroes,” she said.