Reducing water consumption in college dorms. Using stored ice to reduce the cost of cooling academic buildings. Raising awareness about an invasive pest that is destroying Pennsylvania’s plants and trees.

Students from six area colleges and universities presented on those topics and more during the Sustainability Conference held earlier this semester at Lafayette. Sponsored by Lehigh Valley Association of Independent Colleges (LVAIC), the event drew more than 170 participants who shared their ideas and research on ways of being better stewards of the planet.

“Learning from each other is key,” says Marie Fechik-Kirk, director of sustainability at Lafayette and a conference organizer. “Sometimes we get stuck in our Lafayette silo, so it’s good to share what’s going well and hear what’s happening in our peer schools so we can learn from one another.” 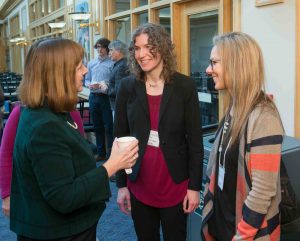 Keynote speaker Kirsi Jansa, a documentary filmmaker and journalist specializing in environmental and sustainability issues, kicked off the one-day conference by saying we need to change the way we talk about climate change. “Focusing on the causes rather than the impact will help people become more solution-focused,” said Jansa, who produced Gas Rush Stories, a series of short documentaries about natural gas drilling in Pennsylvania.

Climate change has become politicized in America, she said, a topic to be avoided in polite company or shared only with others of common ideology. Avoidance, however, serves no one, she said. “Germany has been educating its citizens about climate change since the 1970s,” said Jansa, a native of Finland, who now lives in Pittsburgh. “We’re all in this boat together.”

And while some climate experts say we’ve entered a global warming minefield, Jansa is buoyed by success stories of communities and ordinary people taking bold steps to address the crisis and live more sustainable lives. That’s the focus of her documentary series Sustainable Pioneers. During her presentation, she shared a clip from an episode about how the city of Pittsburgh is forging its own environmental path in response to President Donald Trump’s withdrawal from the Paris climate treaty. Spoiler alert: It constructed the Frick Environmental Center, one of the world’s most sustainable buildings. 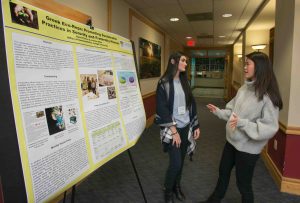 The Paris treaty seeks to keep global temperature rise this century to below 2 degrees Celsius, which will require a significant reduction of greenhouse gas emissions worldwide. With 40 percent of all U.S. carbon emissions coming from buildings, both residential and commercial, the Frick Center stands as a model of hope.

“Most Americans don’t know there is an energy revolution happening in this country and around the world,” Jansa said.  “If we don’t talk about climate change, who will?”

Fechik-Kirk said Jansa’s positive message was inspiring as were the student presentations and poster session. “It’s important for students to see that people are interested in their topic areas of research,” she said. “It makes them feel proud of what they’re doing.”

Here’s a look at some of the presentations.

Reducing electronic waste while educating students about “conflict minerals” contained in cellphones was the focus of a poster presentation by Nicholas Hoffman ’18 and Duncan Brady ’18, both engineering studies majors.

“We know that the largest growing source of waste in the U.S. is electronic,” said Brady, and cellphones are the most common electronic device in the pockets of Lafayette students.

Most people don’t want to think about the rare earth materials that are in them, or the bloody conflicts they’re fueling in countries like the Congo or Rwanda where renegade army groups control access to the mines. Hoffman and Brady created a poster that identified about 15 of the minerals, including tantalum, which is used in the manufacture of TVs, laptops, cellphones, and countless electronics.

“Electronics can be recycled, but most people throw them in the trash,” said Hoffman. “The more we waste, the more minerals will be taken from war-torn areas.”

Lafayette is offering its annual electronics recycling collection from 8:30 a.m. to 3 p.m. Thursday.  The event is open to the Lafayette community. 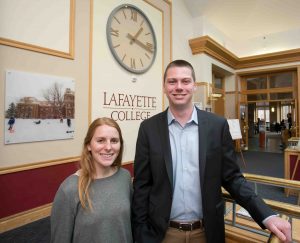 Kayla Zola ’18 and Sean Thomas ’18 looked at increasing crop production, creating learning opportunities, and raising awareness among students about the College’s working farm as part of a Capstone for environmental studies. Recommendations included building a greenhouse to prolong the growing season, expanding the field by 1.5 acres to 2.65, and installing a wood-fire pizza oven as a draw for educational events at the farm.

“It’s not only about having a bigger farm but a more impactful farm,” said Zola, who along with Thomas is an environmental studies major. 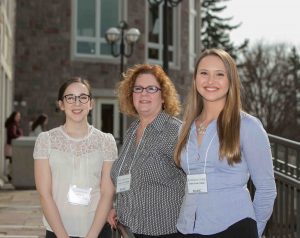 The eradication of the spotted lanternfly is a mission students from Cedar Crest and Moravian colleges feel passionate about, so they joined forces in an effort to raise awareness about the invasive pest causing massive destruction to 75 species of Pennsylvania’s plants and crops, including apples, grapes, hardwoods, and hops.

Kim Adamson, director of state and financial services at Cedar Crest, is pursuing a master’s of divinity at Moravian College.  She once ranted about the destructiveness of the spotted lanternfly during a class on “mission,” prompting the professor to suggest God was calling her to do something about them.  At work the next day, she contacted the director of Cedar Crest’s arboretum and was told other students shared her concern.

One of them was Amanda Childs ’20, president of Cedar Crest’s outdoor club.

“When I was walking through the park one day I noticed they had a sign up with a picture of a bug I had never seen before,” said Childs, a chemistry and math major. “I started doing some research and found out it’s a growing problem.”

The spotted lanternfly was first detected at a nursery in Berks County, Pa., in 2014, where it’s believed to have arrived on an ornamental plant from China. It’s now spread to 13 counties of Pennsylvania as well as Delaware and New York.

For a graduate class on sustainable development on college campuses, Clinton Nwanedo took a hard look at how Lehigh could reduce its dependence on the electrical grid. One of his more groundbreaking suggestions was the implementation of ice storage to decrease energy use when cooling buildings during summer months. “You freeze water at night during low demand when electricity is produced more cheaply, and then you use that ice to cool the buildings and supplement air conditioning during the day,” said Nwanedo, who recently earned a master’s in electrical engineering. < 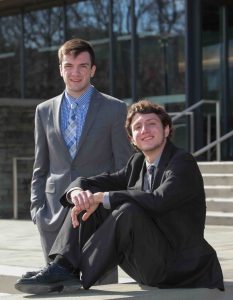 How do you convince students to reduce water consumption? Offer a tuition reduction to students in the dorm that uses the least amount of H2O.

That’s the plan of Daniel O’Neill ’20 and David Mets ’20.  “If we have a 10 percent reduction, we can raise over $100,000 through conservation,” said O’Neill, who is triple majoring in international business, finance, and economics.