By Justin Ungerleider ’19 and Noah Decker ’19

Princeton University’s Stephen Pacala believes there is still hope when it comes to climate change.

“The prospects have never been brighter [for addressing] the carbon emissions problem than they are right now,” said Pacala, Petrie Professor of Ecology at Princeton, who spoke before a crowd of 300 in Colton Chapel earlier this month. His talk was part of the President’s Lecture Series and a precursor to the College’s celebration of Earth Week, which concludes Sunday.

Pacala researches sources of renewable energy with the goal of combating climate change due to human-produced greenhouse gas. Together with another scientist at Princeton, he launched the Carbon Mitigation Initiative, a 20-year project in partnership with British Petroleum, and chairs the National Academy of Sciences Committee on Carbon Dioxide Removal and Sequestration.  Before revealing his reasons for optimism, Pacala explained some key scientific and political points surrounding climate change. 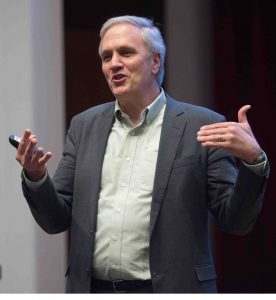 “There is multidimensional evidence that humans have largely contributed to the increase of CO2 emissions in the last century,” he said. “Records show that anthropogenic (human-produced) greenhouse gases and temperatures increased rapidly after the Industrial Revolution, leading to the highest CO2 levels ever.”

The Paris Agreement, which has been signed by 195 countries, seeks to limit carbon emissions so the global temperature will not rise by more than 2 degrees Celsius in the next century. An increase in temperature beyond that threshold could lead to a rise in sea levels, loss of coastal cities, tropical famine, and mass extinction, said Pacala.

“In order to reach these goals, developed nations would have to reduce their emissions by 80 percent by 2050,” he said.

Despite this setback and lack of support by the Trump administration for reducing human-produced carbon emissions, technological advances in the past 15 years have put a zero-carbon-emitting, all-electric economy within reach, said Pacala, who referred to existing technologies as “wedges” for stabilizing emissions.

“There are 14 technologies in the marketplace to get this started, but we only need seven,” he said. 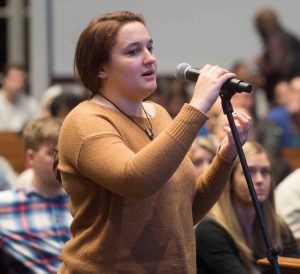 Wind and solar power seem to be the best bets right now and have become “preposterously cheap,” he said.  There’s also an abundant supply of natural gas, he said, a fuel source cheaper than coal but that comes with some environmental complications due to the way it is extracted from the ground.

“We have a technological endgame we didn’t have 15 years ago,” he said.

Advances in public opinion are also encouraging, he said. “Most people 18-25 think that climate change is the most pressing issue in the world,” said Pacala. “The change is happening; it’s just generational.”

Global catastrophes such as the 2003 heat wave in Europe that killed 35,000 people, Hurricane Sandy, which caused $70 billion in damages in 2012, and the bleaching of the Great Barrier Reef underscore the need to take climate change seriously. So too are the hundreds of lawsuits being filed against some of the world’s largest oil and energy corporations for their roles in contributing to climate change and failing to protect citizens from its effects.

In closing, Pacala said 15 years ago he would not have predicted a “return to denial” over the science of climate change nor the availability of tax subsidies for renewable energy sources. 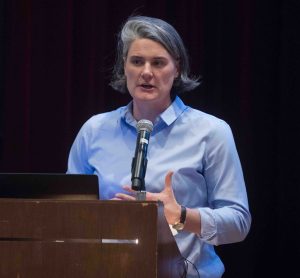 Kira Lawrence
Professor and chair of geology and environmental geosciences and member of the environmental sciences and studies advisory committee
A major takeaway from Dr. Pacala’s lecture is that to avoid dangerous tipping points in the climate system, we all need to be participants, not spectators, in addressing global climate change. I see this as a call to action for our community to build on the important foundational work in sustainability we have already done.  A core tenet of our mission as an institution is to prepare our students to confront tomorrow’s challenges. We should seek to translate our values into action by building a model at Lafayette for how small communities can live within environmental bounds.

Dru Germanoski
Van Artsdalen Professor of Geology and Environmental Geosciences and co-chair of environmental sciences and studies
I couldn’t avoid taking note of the contrast between a previous speaker’s perspective at the end of fall semester and Professor Pacala’s perspective on the future of transportation.  The speaker in the fall argued that we have no viable alternative to burning fossil fuels to power our vehicles, thereby supporting the notion that diesel fuel and gasoline would inevitably remain a major component of our energy future, regardless of their impact on climate change.  Professor Pacala presented evidence that many major automobile manufacturers will no longer produce fossil fuel-fired internal combustion engines in the next five to 10 years. This is a dramatically different message about our ability to move away from fossil fuels, even in the transportation sector.