Chronic traumatic encephalopathy (CTE), the degenerative brain disease found most commonly in athletes with a history of repetitive brain trauma, is set for a major breakthrough. Researchers are close to developing a test for early detection, but the major grantor, the National Institutes of Health, has suddenly cut funding. A consortium of sports businesses quickly steps in with immediate funding. Should the researchers take the money?

This was the ethical dilemma students tackled in the 2018 Fleming Ethics Bowl Competition at DeSales University.

Jane Rosa ’18, Brendan McNamara ’18, and Andrew White ’18 made up the Lafayette team that faced off against 11 other teams from various Lehigh Valley colleges and universities.

The three students, friends since their first year at the College, all share economics as a major and worked together as a team in an advanced monetary policy course.

“The camaraderie, skills, and working style we developed over the years were transferable to the competition,” says McNamara.

“We understand each other’s potential and hold each other accountable to reaching it,” says White.

Rosa was the team lead, having been interested in entering the competition for years. To prepare, the team worked on the case for several months. They consulted with several key faculty. Rosie Bukics, Thomas Roy and Lura Forrest Jones Professor of Economics, and Peter Gildenhuys, assistant professor of philosophy, helped team members refine their thinking and prepare their response.

“We practiced with them twice,” says Rosa. “After the first practice we had to add more information and then fine-tune after the second practice.”

“They were very helpful,” says White. “Their expertise helped shape our thinking. We understood the economics but were aided by the philosophical theories in bioethics.”

Round one was fairly equal; all teams leveraged resources to prepare. So the College team, like other teams, gave a solid 15-minute presentation followed by 15 minutes of questions from a small panel of judges.

The strongest teams made it to the top four. Here’s where the challenge revved up. Finalists were given an unexpected twist in the case. They then had 45 minutes to read the new details and prepare, without assistance, their response.

This is where the rubber meets the road. Not months to prepare. No faculty influence.

Round two asked for a 10-minute presentation followed by 10 minutes of questions from the full slate of judges.

The twist in their CTE case? Fast forward two years. CTE researchers had accepted the questionable funding and successfully completed a diagnostic exam. Funders told researchers to withhold the exam from the public. Should they comply or leak it?

“By the time you read and fully understand the twist, there isn’t much time to work,” says Rosa. “This is when you rely on your preparation and your team.”

To be successful, they articulated their position, explained their reasoning, and then stayed firm despite judges’ attempts to poke holes and throw them off their game.

“Answers are not black and white,” says McNamara. “We had to weigh the factors and be deliberate.”

“We play off each other well,” says Rosa. “We listen to each other and respect each other’s intelligence.”

“I trusted my team to step in when I would start to lose my train of thought,” says White.

“It helps we work well under pressure,” says McNamara. 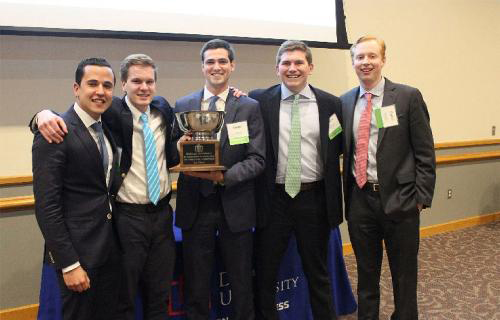 This is not the first time the College has wrestled with the ethics bowl. Last year, Lafayette took first place in a case of insuring driverless vehicles thanks to the hard and nimble work of Othman Guennoun ’17, Andrew Wargofchik ’17, Connor Steigerwald ’17, Joe Ritter ’17, and Daniel Crowley ’17.

The students’ pride is clear as they show a photo of the team holding the prize.

And, in case you were wondering, they chose to leak the CTE test.

“It was the most ethical choice,” says Rosa. “It was a solution that may not seem fair but would be best for most people.”

That choice seems to align with the mission of the competition: to promote a culture of ethical awareness and action in the business professions.